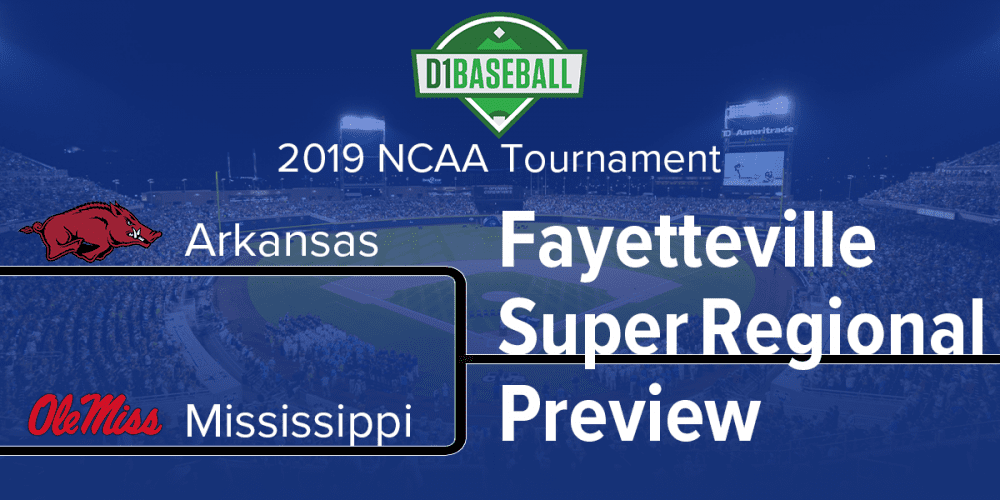 History didn’t repeat itself again this season. If you remember, the Rebels were knocked out at home in the regional round last season, but their fate changed last week when they dominated the Oxford Regional field. Now, the Rebels are back in an NCAA Super Regional against a team they’ve had success against this season, winning three of five. Ole Miss is playing its best brand of baseball at precisely the right time, which wasn’t the case a couple of weeks ago entering the SEC tournament.

How Arkansas Got Here

Just a season ago, the Hogs were an out away from winning the national title. Now, the Hogs looks to return to Omaha with finishing the deal on their mind. Arkansas put together a very consistent and impressive campaign this season, fielding one of the nation’s premier offensive lineups and earning a national seed to the postseason. Arkansas made easy work of the Fayetteville Regional field with a dominant win over TCU in the championship game. Now, the Hogs looks to return to Omaha yet again under Dave Van Horn.

The Hogs obviously have an advantage when Isaiah Campbell is on the mound. Campbell has the look of a big leaguer and has been terrific this season with a fastball anywhere from 90-94 mph, along with a filthy slider, splitter and true curveball. Campbell will attack hitters with a true four-pitch mix, and with poise. Where things can get interesting for Arkansas is with the No’s 2 and 3 spots with Patrick Wicklander and Connor Noland. Wicklander is a talented lefty who will get into the 90s with his fastball, while Noland is a physical righty sitting 89-92 mph with his fastball, along with feel for at least two secondary offerings.

As for Ole Miss, it’s in good shape with the rotation, too. Junior righty Will Ethridge has a mature presence on the mound and sits in the low-90s with his fastball, along with a nasty slider, while lefty Doug Nikhazy has ice water in his veins and will sit 89-91 mph with his fastball, along with a curveball. The biggest thing about Nikhazy is that he’s so rock-solid mentally that nothing atmosphere-wise will affect him this weekend. Righty Gunnar Hoglund has steadily improved as the season has progressed and his velocity is playing up a bit more down the stretch, while the Rebels have some other starting/long relief options with Zack Phillips and a few others. Ultimately, I feel slightly better about the one-two punch of Nikhazy and Ethridge, but Campbell is the X-factor for the Hogs.

Both of these teams have had some consistency issues at times in the bullpen, but we give the edge to the Razorbacks. In addition to having several solid options in the bullpen, the Hogs also have one of the nation’s premier closers in lefthander Matt Cronin, who sits 91-94 mph with his fastball, while also showing a nasty breaking ball at times. Kevin Kopps is another velocity-centered arm who can get outs, while Cody Scroggins will get up to 98 mph with his fastball and also possesses a slider. Scroggins can be inconsistent at times, but is very good when he’s clicking on all cylinders. Jacob Kostyshock has a fastball sitting 91-94 mph along with a slider that’ll flash plus at times, while righthander Kole Ramage is another key arm for this staff. Ramage’s numbers aren’t overwhelmingly good, but he’s a seasoned veteran who has a fastball up to 91-92 mph with a slider and changeup.

While the Hogs have a slight edge in the bullpen, keep an eye on Ole Miss righthander Parker Caracci. Caracci’s velocity isn’t what it once was, but he’s still 90-93 mph with his fastball, along with a filthy breaking ball. Caracci can be inconsistent at times, but he’s been his old self as of late. Austin Miller is another quality arm to watch. Miller has a hard-nosed approach and serves as an emotional leader for the bullpen.

Both of these lineups can score in bunches, but I give the edge to the Hogs here. Ole Miss has some big-time power hitters to watch in Cole Zabowski, Thomas Dillard and Tyler Keenan, while Kevin Graham has done some good things this season, too, with 10 home runs. Even shortstop Grae Kessinger has some pop in his bat, while Cooper Johnson, too, has the ability to run the ball out of the yard. With that said, Arkansas gets the nod here. The Hogs are ranked 19th nationally in batting average, 16th nationally in home runs per game, 21st in on-base percentage and 18th in scoring. Trevor Ezell is a graduate transfer who gives this team so much versatility and leadership atop the lineup, while the three-headed monster of Casey Martin, Dominic Fletcher and Heston Kjerstad continue to be thorns in the side of pitchers. Matt Goodheart is a high-quality hitter who can hit for average and power, while Jack Kenley is the unsung hero of this team with double digit home runs and consistent production. Jacob Nesbit is someone who plays better than his numbers, while freshman Christian Franklin has some juice in his bat. The Hogs are tough to contain when they get rolling, and that’ll be a key entering the weekend.

Arkansas might be ranked in the 100s from a defensive standpoint, but this team is much better than that figure. Dominic Fletcher is a premier defender out in center field and takes excellent routes, speedy Christian Franklin has a flare for the dramatic in left field and Casey Martin has a cannon for an arm at shortstop. Casey Opitz also does a solid job behind the plate. With that said, the Rebels get the advantage here. Ole Miss is ranked 26th nationally (.978) in fielding percentage and has a strong, steady defensive club. Cooper Johnson is one of the premier backstops in college baseball with excellent receiving skills and a plus arm to second, while shortstop Grae Kessinger has terrific instincts and will make pretty much any play he needs to make. The outfield is also very good with center fielder Ryan Olenek taking excellent routes to the ball and showing plenty of athleticism. Ole Miss typically is not going to beat itself with bad defense.

Ole Miss will have a belief coming into the weekend that very few teams have against the Hogs — it knows it can take a series from the Razorbacks. After all, the Rebels have won three of five from Dave Van Horn’s club this season. However, it’s hard to go against the Hogs in this category, especially at home. The Hogs have several veterans throughout the lineup, including Dominic Fletcher, Jack Kenley and Casey Opitz, while Campbell has been through all the rigors on the mound and has pitched in a Super Regional. He’ll be ready to start the weekend for the Hogs. Arkansas will have a massive home field advantage and the Hog Pen will be rocking. For those reasons and more, it gets the edge in this category.