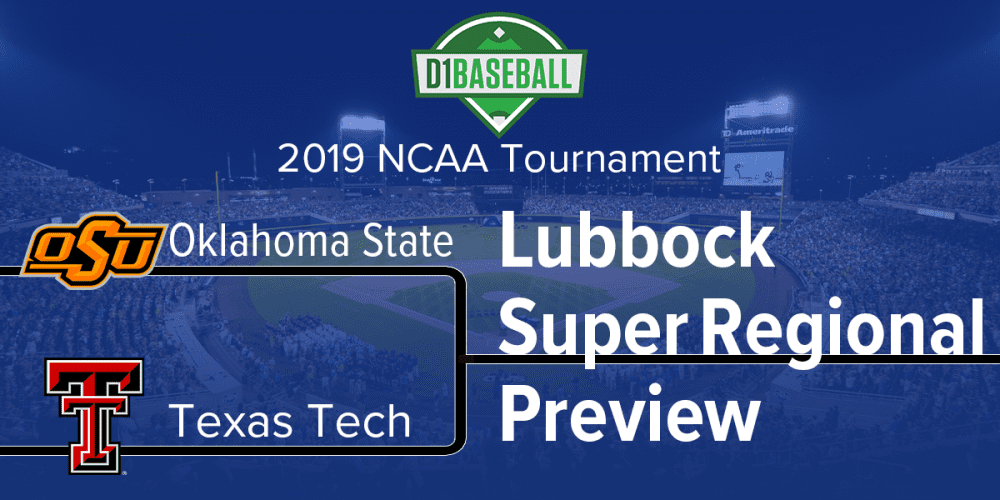 The Lubbock Super Regional features the Nos. 8 and 9 national seeds, so Texas Tech and Oklahoma State should be evenly matched

The Cowboys entered the midseason point as a team still trying to find their way. But boy did they ever, as the Pokes are one of the nation’s hottest teams, sweeping Oregon State on the road to get it kick-started, while making big waves by winning the Big 12 tournament. OSU lost one game in the OKC Regional to Connecticut but responded in impressive fashion with strong pitching to advance to the Supers.

Much like the Cowboys, the Red Raiders had some blemishes earlier this season, losing a series at Texas and having an average weekend at the Frisco College Classic. However, Tim Tadlock’s club, as usual, turned on the jets the second half of the season, won the Big 12 regular season title and stormed through the Lubbock Regional with a 3-0 record, including a championship game win over Dallas Baptist.

These two teams are similar from a pitching standpoint. While both have had their fair share of ups and downs this season, the two rotations enter Super Regional action on a hot streak. Micah Dallas (3.36) and Bryce Bonnin (4.28) were both excellent in the Lubbock Regional. Dallas has good velocity on his fastball and a filthy slider, while Bonnin is a power pitcher who has developed better command and secondary stuff as the season has progressed. Tech also has a good one in righthander Caleb Kilian (3.89). Kilian will sit anywhere from 90-93 and up to 94 mph with his fastball, while the curveball is a real weapon for him as well. Kilian can throw three pitches for strikes. As for the Cowboys, Jensen Elliott (3.33) entered the season with high hopes and has been phenomenal down the stretch with a fastball 89-92 and up to 93 mph, while also possessing three pitches for strikes, including a quality changeup/slider combination. OSU has four legitimate starters, including veteran Joe Lienhard, who threw well in the regional finale against UConn this past weekend. Brett Standlee has a quality arm with a fastball up to 92-93, along with a slider and changeup, while Parker Scott is a talented lefty with a four-pitch mix.

There’s no doubt the Cowboys have some premier arms to watch in the bullpen with Peyton Battenfield and Ben Leeper leading the charge. Battenfield has a fastball up to 93-95 mph and has been terrific this season, while Leeper is a Rob Walton special. Leeper has taken a massive step forward this season and has evolved into one of the nation’s better relievers. With that said, I still think Texas Tech has the edge here. Righthander Taylor Floyd (2.86) has been terrific this spring and has a filthy fastball and slider combo to go with a hard-nosed demeanor. Dave Haveman (2.08) is consistent and has outstanding command of the zone with 52 strikeouts and just seven walks, and Clayton Beeter (2.79) and John McMillon (3.32) are the other ringleaders in the bullpen. Beeter is a young, talented and premier arm who has 38 strikeouts in just 18.1 innings, while McMillon reportedly approached triple digits on the radar gun at the Lubbock Regional last weekend. The husky righty has punched out 52 batters in 38 innings. Tech also has plenty of other power options out of the pen, but none they trust as much as McMillon, Haveman, Beeter and Floyd.

Both the Red Raiders and Cowboys enter the weekend red-hot from an offensive standpoint, though the statistics are a little skewed for the Pokes. For instance, OSU is ranked 141st nationally in team batting average at a .269 clip. However, it has been knocking the cover off the baseball the past few weeks, with the final two games against Connecticut being the exception. Meanwhile, Texas Tech ranks 16th nationally in batting average at a .301 clip. Cameron Warren (.367) is having an incredible season with 17 homers and 75 RBIs, while Josh Jung, as usual, is having a strong season with a .340 average, 11 home runs and 53 RBIs. Speedster Gabe Holt is a spark plug who can really get things going for the Red Raiders with a solid average (.324), along with 28 stolen bases, while Brian Klein (.317) is a veteran with a steady presence and approach and has an interesting stat line with just one home run, but a whopping 51 RBIs. As for the Cowboys, Carson McCusker (.312) has big-time pop with 17 doubles and six RBIs, Alix Garcia (.301) has pop and came through with a huge home run in the OKC Regional and Trevor Boone and Andrew Navigato can change the complexion of any series with a combined 32 homers.

There are plenty of instances where statistics are a little misleading, but this isn’t one of them. Texas Tech is clearly the better defensive club entering the Lubbock Super Regional. The Red Raiders have a couple of strong defenders up the middle with shortstop Josh Jung and veteran second baseman Brian Klein leading the charge. Jung has made a smooth transition to short and had an incredible play in the Lubbock Regional this past weekend, while Klein is a steady defender who serves as a good teammate and double play combo. Parker Kelly and Easton Murrell are serviceable options at the hot corner, while behind the plate, I’ve liked what I’ve seen from Braxton Fulford and Cole Stilwell this season. In the outfield, Kurt Wilson is an athletic guy who can make things happen, while spark plug Gabe Holt has premier speed and can track anything down. Dylan Neuse is another athletic defender with some impressive versatility.

The Red Raiders have several key veterans throughout the starting lineup and on the pitching staff. Many of those guys have Super Regional experience, and that should help calm nerves going into the weekend. In addition to the existing experience, the Red Raiders have a terrific home field advantage at Dan Law Field, sitting at 28-6 on the season in home games. Tim Tadlock’s club is almost unbeatable at home in the postseason, and they already have a 3-0 record against OSU this season. But it’s a new weekend and a much different Cowboys club.