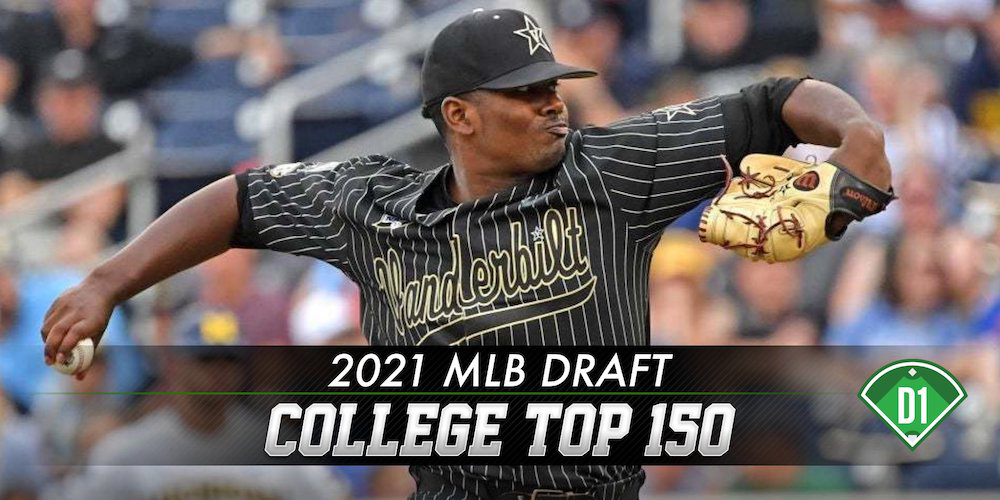 With the passing of the 2020 MLB Draft signing deadline on August 1, it’s now time to adjust our prospect rankings for 2021. However, not much has changed at the top since our initial 2021 list was released back in February. With a shortened college baseball season and limited summer baseball in 2020, the prospects have had little opportunity to separate themselves.

Still firmly entrenched at the No. 1 spot is Vanderbilt righthander and 2019 CWS hero Kumar Rocker. Rocker has everything you want in a pitching prospect with size, athleticism, stuff and makeup.

He continues to be joined by several intriguing prospects in the top five, including Commodore teammate Jack Leiter  who will be draft-eligible by age and fellow SEC star Jud Fabian (Florida). Potential five-tool shortstop Matt McLain (UCLA) also returns. Jumping into our top five is Jaden Hill (LSU), replacing Colton Cowser (Sam Houston State) who drops a couple spots, but remains in the top 10.

Vanderbilt leads in quality with the two top ranked ’21s, while SEC powerhouse Florida leads individual schools with eight in the Top 150. The Gators are followed by UCLA and Texas Tech with seven apiece. Louisville and TCU round out the top schools five with five each.

The college prospect rankings are assembled by Kendall Rogers and Aaron Fitt and are spearheaded by scouting director David Seifert.

Check out the full Top 150 by becoming a D1Baseball Subscriber!