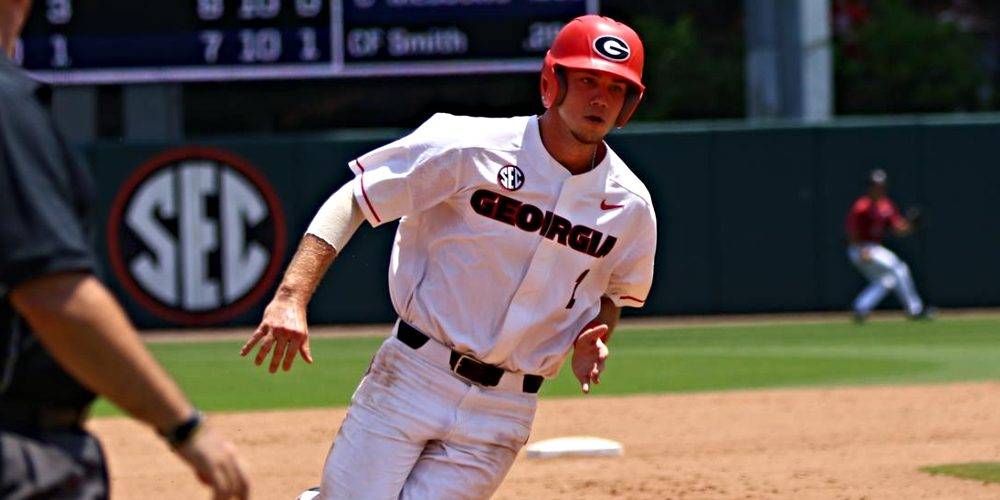 The Bulldogs are sizzling hot and handed rival Georgia Tech its first midweek loss of the season in a 12-2 home win in Athens. Tucker Maxwell and Patrick Sullivan each hit home runs for the Dawgs, while LJ Talley had three hits and two RBIs and Aaron Schunk, John Cable and Chaney Rogers each finished the night with two-hit performances. On the mound, Tim Elliott put together yet another solid midweek start, striking out six, walking two and allowing five hits and two runs in seven innings.

Southern over No. 9 LSU

Crazy things can happen in college baseball on Tuesday nights, and that was the case in Baton Rouge, as Southern, which has an RPI of 201, shocked red-hot LSU in a 7-2 victory. Southern veteran righthander Eli Finney tossed a gem against the Tigers, striking out seven, walking three and allowing a run and a hit in seven innings, while offensively, Tyler LaPorte led the charge with three hits and an RBI. Willie Ward also had a nice day for the Jags with two hits and two RBIs.

• No. 1 UCLA is leaving no doubt these days, cruising past No. 18 UC Irvine, 9-3, at home. Jesse Bergin put together a solid start, allowing just two runs in five innings, while offensively, Garrett Mitchell had three hits and two RBIs, Michael Toglia had three hits and Chase Strumpf finished the night with two hits.

• No. 3 Oregon State had its winning streak against rival Oregon snapped Tuesday in a 12-8 loss. OSU starting pitcher Sam Tweedt allowed five runs and five hits and didn’t get out of the first inning. Meanwhile, Ryne Nelson closed out the game for the Ducks with four strikeouts in two shutout innings. Offensively for the Ducks, five players had two hits, with Aaron Zavala tallying two doubles and knocking in three runs. Cam Campbell and Tanner Smith each knocked in two runs to lead the way.

• No. 5 Stanford bounced back from the tough series loss to UCLA with an 11-1 win over San Francisco. The Cardinal got a strong night from Kyle Stowers, who hit a home run and knocked in four runs, while Will Matthiessen hit a home run and finished the afternoon with a pair of RBIs. Duke Kinamon chipped in a three-hit performance, while on the mound, Alex Williams allowed a run in five innings.

• No. 8 East Carolina put together yet another complete effort in an impressive 9-1 road win over UNC Wilmington. Trey Benton allowed a run in 2.2 innings, while Sam Lanier calmed things down a bit with two shutout frames. Turner Brown led the ECU offense with a pair of hits.

• UPSET ALERT! No. 10 Texas A&M struggled offensively in a 5-3 loss to Texas State in College Station. Texas State’s John Wuthrich hit a grand slam in the first inning, and that proved to be the difference for the Bobcats. In some positive news for the Aggies, righthander Christian Roa, who have missed the last two weeks with soreness, struck out two in an inning of work.

• No. 11 Ole Miss crushed Southern Miss at home, 11-2. Knox Loposer had a big night for the Rebels, going 2-for-4 with a double and three RBIs, while Tyler Keenan also hit a double. USM walked seven Ole Miss hitters in the setback.

• No. 12 Arkansas had more mound drama on Tuesday night, but the offense took care of business in a 15-8 win over Oral Roberts. Heston Kjerstad had two home runs and knocked in five runs, while Matt Goodheart continued his hot hitting with a home run, two hits and four RBIs. Casey Martin also had a productive night with two doubles, four total hits and an RBI.

• UPSET ALERT! No. 13 Arizona State continued its struggles, particularly on the mound, in a 10-9 loss to UNLV. The Sun Devils had a 9-4 lead over the Rebels heading to the ninth inning, but UNLV won on a walk-off walk. UNLV’s Bryson Stott had two hits, while the Devils walked a whopping 12 Rebels hitters. Spencer Torkelson hit a home run to lead the ASU bats. With the loss, ASU has now lost four of its last five games.

• No. 14 Texas got strong pitching throughout the night in a 3-1 win over Rice, which is now 14-21 on the season. Ty Madden allowed a run in 3.1 innings, while Matteo Bocchi struck out three in three shutout innings. Donny Diaz closed out the contest in style with 1.1 shutout innings, while leadoff hitter Duke Ellis had a triple and two hits total.

• No. 15 Texas Tech used plenty of offensive production to take down New Mexico State, 10-5, in Midland. Josh Jung hit a home run and knocked in three runs in the win, while Cole Stilwell had a huge night, going 3-for-5 with three RBIs. Brian Klein and Gabe Holt also had good nights, each tallying two hits, while Mason Montgomery gave Tech a solid start, allowing just two runs in five innings against a powerful NMSU lineup.

• UPSET ALERT! No. 19 TCU suffered a tough midweek defeat on the road as Dallas Baptist scored nine runs in the middle innings on the way to an 11-6 victory. Herbert Iser hit a home run for the Patriots, while Jackson Glenn had two hits in the win. But how about this statistic? TCU pitchers walked an astonishing 10 DBU hitters in the loss with Jared Janczak walking three and allowing two runs in two innings.

• No. 20 Louisville bounced back from its series loss at Clemson to take down Northern Kentucky, 11-2, at home. Shortstop Tyler Fitzgerald had a big day that included three hits, including two doubles, while Zach Britton also chipped in a two-double performance.

• No. 21 North Carolina put together an offensive onslaught in a 17-4 win over UNC Greensboro. Aaron Sabato had a huge day for the Tar Heels, going 2-for-3, both doubles with three RBIs, while Ashton McGee knocked in four runs and Brandon Martorano knocked in two runs.

• UPSET ALERT! No. 22 Auburn jumped out to a 5-0 lead over Jacksonville State, but the Gamecocks scored six runs in one inning and five more in another to beat the struggling Tigers, 11-6. Alex Webb and Chase Robinson each had two hits and two RBIs for the Gamecocks, while Michael Gilliland was terrific out of the bullpen, striking out three and allowing just one hit in 4.1 shutout innings.

• No. 23 UC Santa Barbara had a nice debut game as a member of our Top 25 rankings, beating Pepperdine 8-2 on the road. Jorge Arellano put together a strong start, striking out three and allowing just four hits in five innings, while Tommy Jew knocked in four runs and Armani Smith hit a home run.

• UPSET ALERT! No. 24 Baylor suffered a tough midweek loss at UT Arlington, losing 2-1, in 13 innings on a walk-off walk to Tyler Rice. Anthony Dominguez had two doubles for the Mavericks, while on the mound, Riley Bost tossed 2.1 innings of shutout baseball to close out the contest.

• Florida extended its winning streak over rival Florida State to 11 games by winning 3-1 in Tallahassee. Kirby McMullen hit a pinch hit two-run triple in the top of the ninth to give the Gators a 3-1 advantage. David Luethje allowed a run in four innings, while Ben Specht closed out the contest with three shutout innings. FSU wasted a strong start by Conor Grady, who allowed a run (unearned) and two hits in seven innings. With the loss to the Gators, Mike Martin now finishes his FSU career (unless they play in the postseason) with a 76-77 record against the Gators.

• Indiana State had struggled over the past week, but got back to business Tuesday with an 8-7, 10-inning win over Michigan. ISU’s Jacob Means hit a solo home run in the 10th to give the Sycamores the lead and the win. He finished the night with three hits and two RBIs, while Clay Dungan had three hits and two RBIs and Romero Harris had a double and three RBIs.

• UTSA scored 13 runs in the first inning on the way to a 25-2 victory over Lamar. Five Roadrunners hit home runs in the game, while seven different players finished the night with three RBIs. The ringleader was Ryan Stacy, who went 4-for-4 in the dominant win.

• Alabama got some big-time offensive performances in a 21-2 win over Samford. Tyler Gentry and T.J. Reeves had huge nights with two home runs each, while Brett Auerbach hit a home run, had two hits and knocked in four runs.

• Creighton continued its impressive ways with a 10-2 road win over rival Nebraska. Jake Holton had a huge night at the plate, going 2-for-3 with a home run and three RBIs, while Jack Strunc went 2-for-3 with four RBIs and Isaac Collins had two hits.