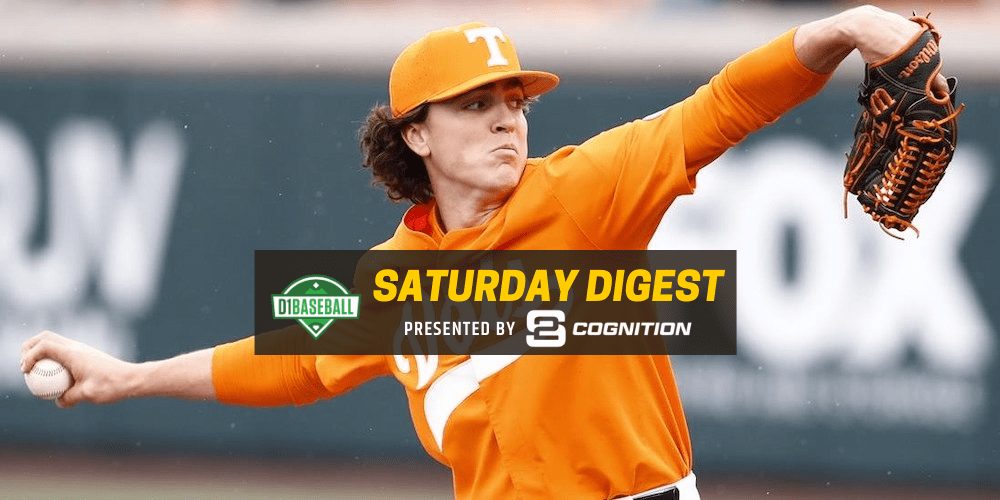 As they proved time and time again a year ago under the leadership of Link Jarrett, don’t count out Notre Dame at any point of any game. With a knack for late-inning magic, similar to their Game 1 win on Friday, the Irish did it again on Saturday scoring one run in the eighth and two more in the ninth to beat No. 5 Florida State in Tallahassee, 5-4, and claim the road series win. Jared Miller provided the eventual game winner in this one, hitting a hard chopper to second base that Miller was able to beat out, scoring two runs on the play. First baseman Carter Putz played a big role offensively as well, hitting a solo home run in the fourth inning that gave Notre Dame a 2-1 lead and adding an RBI double in the eighth that pulled them within one run. Freshman Roman Kimball picked up the win, working the final two innings without allowing a base hit, the sixth pitcher Notre Dame used in this game. The Irish will go for the series sweep on Sunday with Austin Temple on the mound.

For the first time since 2009, Tennessee has claimed a series over Vanderbilt in Nashville. The top-ranked Vols really looked the part in all phases of the game and wasted no time making an impression in Saturday’s game. Jordan Beck and Trey Lipscomb each hit RBI doubles in the top of the first inning, with Lipscomb – who enjoyed a three-hit day – adding an absolute two-run bomb to left-center field in the fifth that gave the Vols what seemed like a commanding 5-0 lead. Chase Dollander moved to 5-0 on the year by firing one 96 mph fastball after another, filling up the strike zone and leading to six strikeouts in eight innings of work. When he wasn’t missing bats he was inducing weak contact, leading to 11 groundballs, as the Tennessee defense excelled. Vanderbilt’s Enrique Bradfield Jr. and Spencer Jones made things somewhat interesting in the seventh as each hit a solo home run, but that would be all the runs they would get with Tennessee taking the 5-2 victory.

One week removed from a series win over a ranked Arizona team, UCLA returned home to secure its second consecutive series against a ranked team from the Pac-12, No. 21 Oregon. Both wins were won by one run, a 3-2 victory Friday and a 4-3 win on Saturday, flexing their usual dominance on the mound. Today it was Max Rajcic’s turn, allowing two runs on four base hits and striking out six Ducks without issuing a walk. Freshman lefthander Ethan Flanagan almost went the rest of the way, falling one out short of a three-inning save. Three of UCLA’s four runs came in the fifth inning on an RBI double off the bat of freshman Malakhi Knight, an RBI ground out and a sac fly, a West Coast offense at its finest. The Bruins, with yet another talented young freshman – Thatcher Hurd – scheduled to start Sunday, will go for the series sweep.

No. 23 Georgia completed its series sweep over No. 14 Florida on Saturday with a 14-8 victory in Athens. The Gators carried a 6-3 lead into the bottom of the seventh inning before the Bulldogs exploded for eight runs. At one point in the seventh inning it looked as though Florida might get out of the inning unscathed, allowing the first three batters to reach before recording two quick outs without allowing any runners to cross home plate. From there, however, the hit barrage began as Connor Tate, Joshua McAllister and Parks Harber all hit RBI singles leading up to Garrett Blaylock’s three-run home run. Fernando Gonzalez followed with a solo shot to cap off the inning’s scoring and Tate added a three-run bomb in the eighth to put the game out of reach. Georgia is now 22-6 on the season in addition to owning the nation’s fourth-best RPI ranking.

Leading up to the weekend, many considered the winner of the Louisiana Tech/Southern Miss series as a likely entrant to Monday’s Top 25. After Southern Miss took Friday’s game by a score of 8-2, Louisiana Tech evened the series with a 4-2 win on Saturday in dramatic fashion. With Southern Miss holding a 2-1 leading heading into the fifth inning, Steele Netterville provided the hit of the day, blasting a three-run shot that gave the Bulldogs a 4-2 lead, which proved to be the final score. Netterville also added a double in a 2-for-4 day at the plate, scoring LA Tech’s first run of the game one inning before his game-changing blast. Bulldogs starter Cade Gibson moved to 4-0 on the year, allowing a pair of first-inning runs before settling down to strike out nine batters over seven strong innings.

The bar has been set high in Fayetteville the past few years, as it certainly feels as though it’s somewhat of a national championship-or-bust type of season. So far, so good for No. 2 Arkansas through the first three weeks of SEC play, as it claimed yet another series on Saturday night with a plenty-convincing 12-5 win over Mississippi State. Similar to last year’s historical season, they’ve yet to lose a weekend series. The offense, which hasn’t consistently fired on all cylinders, looked alive and well in this one as leadoff hitter Cayden Wallace hit a two-run single and a two-run double in a four-RBI performance. Brady Slavens also had a pair of hits, an RBI double and a two-run home run. Chris Lanzilli and Robert Moore hit back-to-back solo shots in the fourth inning. On the mound freshman lefthander Hagen Smith continued his impressive collegiate debut season with six solid innings on the mound, striking out seven to move to 5-1. With the spotlight shining brightly on Tennessee through the early parts of the 2022 season, could this be the year the Razorbacks break on through to the other side?

In a three-game set that began on Thursday night, Auburn got the best of No. 13 LSU on Saturday to claim the series with a 6-4 win. First baseman Sonny DiChiara once again came up big, giving Auburn a three-run cushion with a two-run homer in the top of the fifth and added an RBI single in the eighth. He also hit a double in a four-hit performance, falling a triple shy of the cycle. Joseph Gonzalez moved to 3-0 on the season with six bend-but-don’t-break innings and Blake Burkhalter picked up his sixth save as Auburn moved to 19-9 with back-to-back series wins in the SEC.

Apparently, Dallas Baptist doesn’t like being ranked. The Patriots entered the year as a Top 25-ranked team but fell out after just one weekend of play, losing their opening-season series to SEMO. After beating Sam Houston State, San Diego, Southern Miss, Oral Roberts and Maryland – all regional-caliber clubs – the next five weekends, DBU was reinserted into the rankings as the top-ranked team according to RPI. Its stay might again be short-lived, already losing this weekend’s series against visiting Wofford. The Terriers got big days out of left fielder Brennen Dorighi – who went 4-for-4 with two doubles a home run and three RBIs – and starting pitcher Josh Vitus, who struck out five in five scoreless innings. Keep an eye on Wofford in the SoCon as they are now 20-8 on the year with wins over Penn, Kennesaw State, Cincinnati and now Dallas Baptist.

9 – Red Raiders Go Off On Jayhawks

Texas Tech scored 28 runs on 27 base hits in a 28-2 dismantling of Kansas on Saturday, the fourth time this season they have scored 20 or more runs. It took a little while for the TTU bats to get going on Friday in its 8-2 win, but that wasn’t the case on this day, scoring in every inning except the first and seventh frames. Five players had three or more hits and five players had three or more RBIs. Hudson White had a memorable day at the plate, hitting four RBI singles and an RBI double in a five-hit performance, scoring five runs and driving in five. Star second baseman Jace Jung hit his second home run in as many days, a 440-foot bomb over the batter’s eye to straightaway center field. Getting somewhat lost in run explosion was Brandon Birdsell tossing five scoreless, hitless innings with eight punchouts. Birdsell is now 4-1, 2.31 as part of a dominant season on the mound.

Sunday will be a big day for deciding series involving ranked teams, which undoubtedly will impact Monday’s ranking update. A walkoff single by Justin Boyd in the 11th inning gave No. 3 Oregon State the 3-2 victory over visiting Stanford on Saturday night, allowing the Beavers to even up that series. Relievers Ben Ferrer and Ryan Brown were especially impressive in relief of starter Jacob Kmatz as the trio combined to strike out 14 Cardinal batters. No. 4 Virginia got back in the win column Saturday beating No. 22 Georgia Tech 13-9. Leadoff hitter Griff O’Ferrall had an especially loud day at the plate, hitting a bases-clearing double as part of a four-run second and added an RBI single as part of UVA’s seven-run sixth. Oklahoma evened their series against No. 8 Texas with a 4-2 win as David Sandlin struck out seven Longhorns in six scoreless innings. Kentucky got the best of No. 10 Ole Miss in Lexington, winning by a score of 9-2 in a convincing all-around victory. Jacob Plastiak hit a pair of homers and the Wildcats pitching staff has now struck out 24 Rebels in two games. No. 12 TCU exacted some revenge on West Virginia Saturday, overcoming an early four-run deficit by pulling ahead for good with a three-run sixth inning in a 5-4 win. Brayden Taylor had the biggest hit of the day for the Frogs, a two-run blast as part of a three-RBI day at the plate. After bad weather pushed back the series opener between Pitt and visiting Louisville the two teams split a doubleheader on Saturday. Louisville’s Cameron Masterman had a pair of home runs on the day.