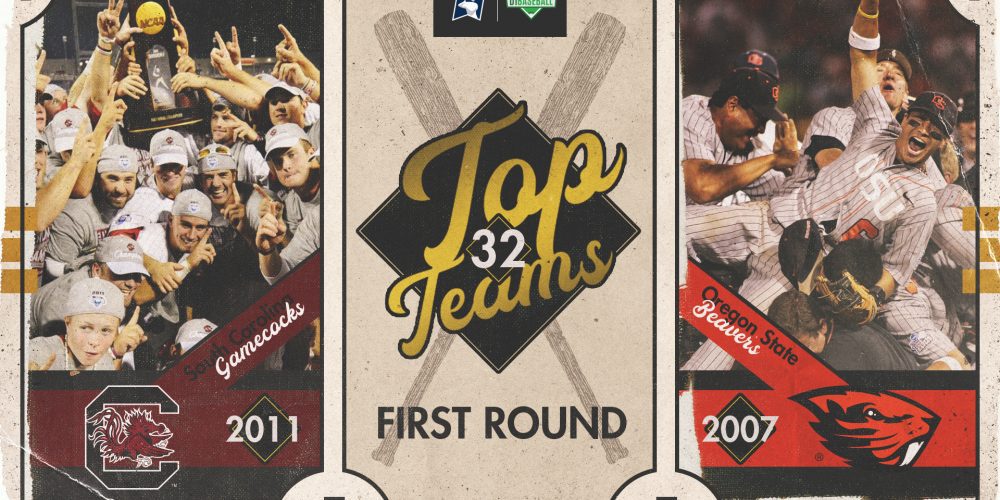 Today would have been day five of the 2020 College World Series. Since we don’t have live baseball to watch, we’re taking a look back at the greatest CWS teams of the modern 64-team NCAA tournament era. In conjunction with NCAA.com, we’ve made our picks for the 32 best Omaha teams since 1999 and seeded them into a bracket.

This team represented the peak of the South Carolina dynasty, when the Gamecocks seemed simply unbeatable in a postseason setting. The second of three straight South Carolina teams to reach the CWS Finals, the 2011 Gamecocks opened the BBCOR bat and TD Ameritrade Park era the same way the 2010 Gamecocks closed the BESR bat and Rosenblatt Stadium era: with a national championship. South Carolina’s ability to win it all in a very offensive setting in 2010 but then adapt and win it all again in a completely different dead-offense era a year later really speaks to the greatness of this group. The 2011 team also became the first team ever to go 10-0 in the NCAA tournament. From 2010 to 2012, South Carolina set NCAA records with 22 consecutive NCAA tournament wins and 12 straight CWS wins. These Gamecocks simply refused to lose when the stakes were highest.

The 2011 team also had a great regular season, of course, going 22-8 in the SEC to tie for the regular-season title and earn the No. 1 seed in the conference tournament, where it went 1-2. Perhaps the meek showing in Hoover bumped South Carolina down to the No. 4 national seed, but it certainly didn’t matter. The Gamecocks rode dominant pitching through a 3-0 showing in their home regional, then held George Springer’s powerful Connecticut Huskies to just three runs total in a two-game super regional sweep. In Omaha, South Carolina topped Texas A&M and then beat No. 1 national seed Virginia twice in a row to reach the Finals, where they held SEC rival Florida to three runs in a two-game sweep. Ace Michael Roth — a first-team All-American that year after going 14-3, 1.06 overall — added to his legend by posting a 1.23 ERA in 22 CWS innings, while bullpen stalwarts Matt Price and John Taylor each appeared in all five Omaha games and worked a combined 16.2 innings without allowing an earned run. That duo accounted for four of South Carolina’s five CWS wins and two saves, helping Roth lead a South Carolina staff that posted a 0.88 ERA in Omaha. That was the lowest by a national champion in the metal-bat era until UCLA posted a 0.80 ERA two years later.

Offensively, these Gamecocks had a couple of stars in future big leaguers Jackie Bradley Jr. and Christian Walker, but the sum was greater than the parts with this tight-knit, ultra-clutch unit. They played spectacular defense and always seemed to come through with timely hits. Second baseman Scott Wingo earned CWS Most Outstanding Player honors more for his sparkling defense than for his .333 average in Omaha, though he did deliver three of South Carolina’s five RBIs in the Finals.

Like the 2011 Gamecocks, these Beavers earned a second straight national championship, but their route to the pinnacle was dramatically different. While South Carolina was dominant from start to finish in 2011, OSU raced out to a 23-3 start in nonconference play but then got lost in the wilderness during Pac-10 play, going 10-14 in conference and barely sneaking into a regional as a No. 3 seed — a controversial selection by the Division I Baseball Committee, as OSU’s metrics did not compare favorably with other bubble contenders who were snubbed. But once they earned that new life, the Beavers played with the swagger of the champions they knew they were — a swagger encapsulated by the “O-State Ballaz” rap song penned by catcher Mitch Canham, now the OSU head coach. Oregon State would go 11-1 in the NCAA tournament to complete the repeat, and by the time it got to Omaha, it was a buzzsaw.

The Beavers’ only postseason loss came in their second game at the Charlottesville Regional against host Virginia, but they took down the Cavs twice in a row later in the weekend to advance through the losers’ bracket. That set up a home super regional against Michigan, which upset mighty Vanderbilt as the No. 2 seed in the Nashville Regional but couldn’t host the super while its ballpark was being renovated. The Beavers held the Wolverines to just two runs in a two-game super regional sweep at Goss Stadium. Oregon State had just one close game in Omaha — its CWS opener against Cal State Fullerton, which was a 3-2 win. The Beavers won the rest of their games by five or more runs, outscoring opponents 39-14 over their final four games, capped by a sweep of No. 3 national seed North Carolina in a CWS Finals rematch. Righthander Jorge Reyes earned CWS Most Outstanding Player honors by going 2-0, 2.92 in Omaha, and future big leaguer Mike Stutes won both of his CWS starts also. Daniel Turpen delivered eight innings of one-run ball in OSU’s other game, and future major leaguer Joe Paterson (1.74 ERA in 10.1 innings) was a force of nature in the bullpen, appearing in all five CWS games.

But Canham and shortstop Darwin Barney were the most iconic members of the OSU dynasty, which made three straight CWS trips from 2005-07. Canham hit .400 with five RBIs in Omaha in ’07, while Barney hit .350 with five RBIs, and both of them continued to come through in the clutch over and over, like they did throughout their careers. Barney and Joey Wong played spectacular defense in the middle infield, and the Beavers swung hot bats when it mattered most, hitting .345 as a team in Omaha.

How They Match Up: It’s an interesting coincidence that the only teams in the modern era to repeat as national champions wound up getting matched up against each other in round one of our bracket. South Carolina is clearly the favorite in this matchup, as it was a juggernaut from start to finish in 2011, while Oregon State barely snuck into the postseason at all in 2007. But once the Beavers got there, they were a different team, and they proved they could beat anybody in the month of June. This would have been an awfully entertaining matchup between two clubs famous for their heart, their confidence, their clutchness and their refusal to lose. Neither team was overflowing with elite pro talent — Bradley was the only player on either team who achieved anything close to stardom in the majors, though Walker did bust out with 29 home runs for the Diamondbacks in 2019. Both of these teams executed at an incredibly high level on defense, though the Beavers get the edge statistically in that department, ranking second in the nation in fielding percentage (the Gamecocks were 35th). Both teams were outstanding on the mound — South Carolina ranked fifth nationally in ERA, and OSU ranked 11th. And the Beavers were actually the more potent offensive team, ranking 66th nationally in scoring, while the Gamecocks were 83rd. So on paper, you can make a case for the underdog in this matchup. But with both of these teams, the numbers really don’t tell the story. You just had to be there to truly appreciate their greatness.

It’s an interesting coincidence that the only teams in the modern era to repeat as national champions wound up getting matched up against each other in round one of our bracket.

Who would take the W?