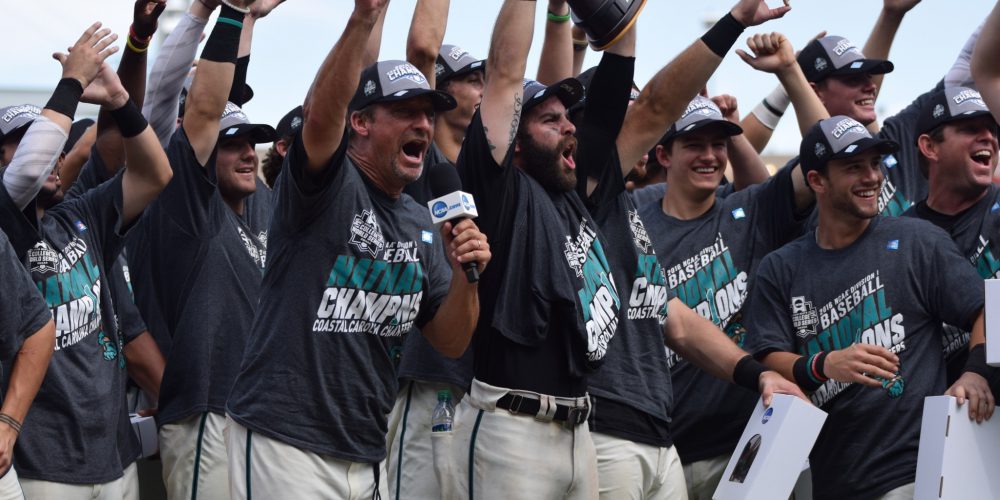 OMAHA — You know how this story ends. It ends with one of the most tension-packed moments in College World Series history, with an Alex Cunningham strikeout, with a jubilant dogpile near the pitcher’s mound on a Thursday afternoon at TD Ameritrade Park, with pandemonium on the streets of Conway and Myrtle Beach. It ends with a 4-3 win against Arizona and with Coastal Carolina etching its name into the history books as the 2016 College World Series champion.

But where does it begin? That question is trickier — because this tale has a lot of beginnings.

It began in 1954, when Coastal Carolina Junior College opened as a branch of College of Charleston. New chapters began when Coastal became a four-year school in 1974; when its athletics department joined the NAIA, then the NCAA’s Division II, and finally attained full-fledged Division I status in 1986-87. It began in earnest when Gary Gilmore was hired to take over the baseball program in 1995 and told his administration that he would take the Chanticleers to Omaha someday — and they looked at him like he was smoking something, as he later put it in his endearing way.

It began with Gilmore’s first great team in 1999, a 43-win club that helped pave the way for many more great clubs to follow. It began with hard work on the recruiting trail over the last five years, work that yielded unheralded but hungry recruits who would go on to form the backbone of a national championship team — from walk-ons like seniors Anthony Marks, Mike Morrison and Connor Owings to juniors like Andrew Beckwith and Alex Cunningham, Coastal’s top two starting pitchers and two of the stars of Thursday’s title-clinching victory.

It began in the fall, when Gilmore had an inkling that his team could be special if he could figure out how to fit his pitching puzzle pieces together.

“If we do that, we have a chance to be pretty good, and we could be better than pretty good if everything pans out,” Gilmore said on scout day in mid-October, leaning against the dugout railing at his beautiful new ballpark, which his prolonged success had made possible.

It began again in February with the start of the season, when Coastal capped an opening-weekend tournament at home with a thrilling win against defending national champion Virginia in front of a raucous crowd of 3,136 fans.

“We want to show our fans that we’re here for real, and this is our year to play, so it just feels great,” CCU shortstop Michael Paez said after that Feb. 21 victory.

It began on May 1, when the Chanticleers were swept in a three-game series at Georgia Tech but refused to let that weekend define their season. On the bus back to Conway after that series, pitching coach Drew Thomas and reliever Bobby Holmes decided the team needed a spark, so they bought a stuffed monkey at a truckstop for $20 and named it Rafiki. With Rafiki along for the ride, the Chants won 24 of their next 28 games.

It began on a stormy Monday night in Raleigh, when Coastal Carolina was down two runs in the ninth inning of the regional championship game against NC State, pushed to the brink of elimination. The Chants loaded the bases — only to see play suspended by rain until the following day, when they rallied for four runs to prolong their season.

It began the following weekend in Baton Rouge, when Coastal swept college baseball superpower LSU in a thrilling super regional in the sport’s most intimidating venue for opposing teams. The Chanticleers let a late lead slip away in the second game of that series, only to win it on Paez’s walk-off double in the bottom of the ninth, propelling the program to Omaha for the first time ever, and completing the mission that had served as the driving force for the players all season long: Getting Gilmore to Omaha, at long last. 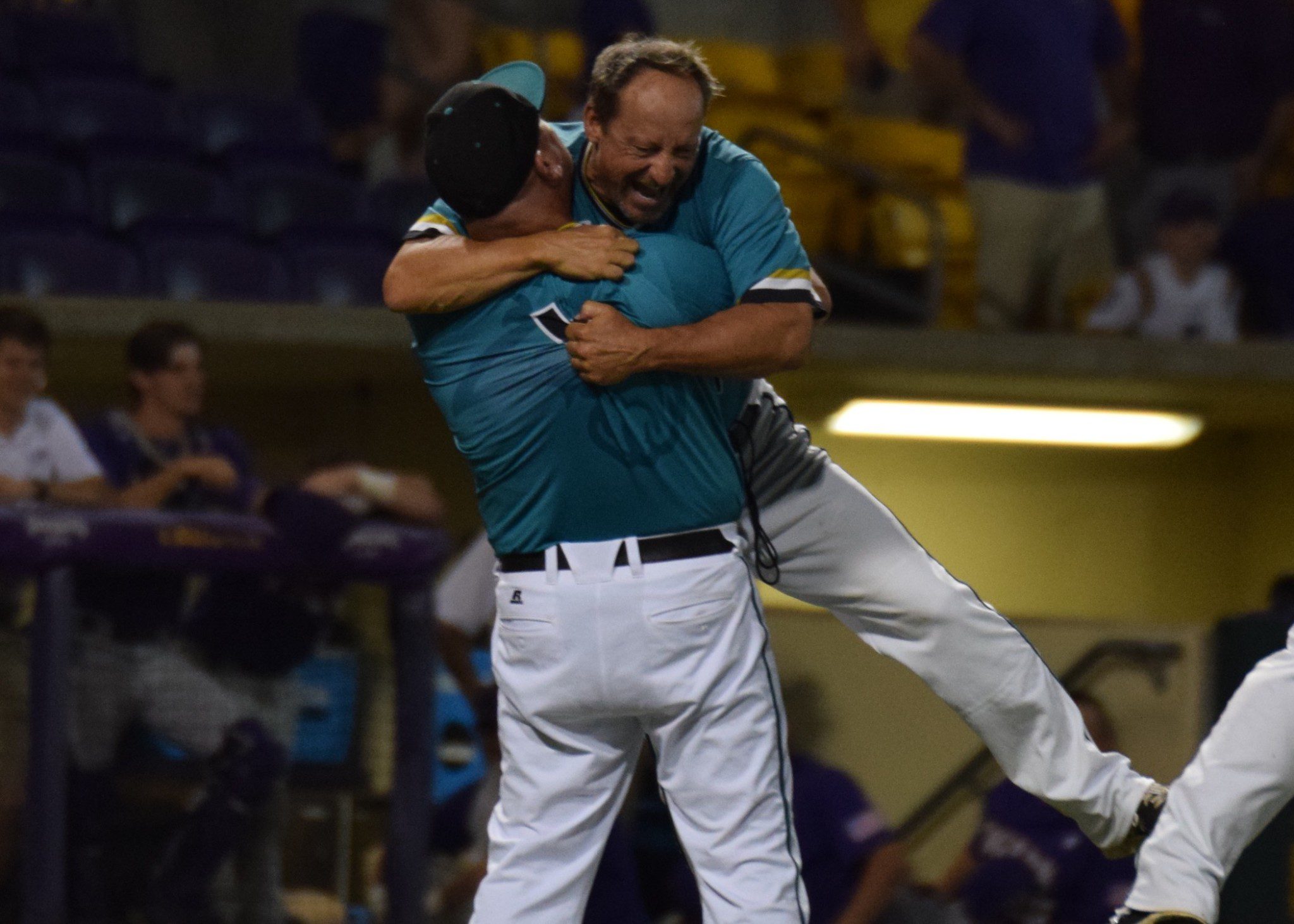 In Omaha, it began with a 2-1 win against No. 1 national seed Florida — the favorite to win the national title all year long — behind a brilliant performance from Beckwith. The Chanticleers lost their next game to TCU, but that was just another new beginning — the start of a run through the losers’ bracket that culminated in back-to-back wins against TCU behind Beckwith and Cunningham, with big help along the way from Marks, catcher David Parrett, second baseman Tyler Chadwick, third baseman Zach Remillard, and Holmes in the bullpen.

Then on Monday, the CWS Finals began with an Arizona win, forcing Coastal back into the familiar position of win-or-go-home. Coastal’s comeback began the next night, with a gutsy 6.2-inning performance from closer Mike Morrison in his third career start, and three hits from Marks at the top of the lineup, and two RBIs from G.K. Young, and another harrowing but successful bullpen performance from Holmes. 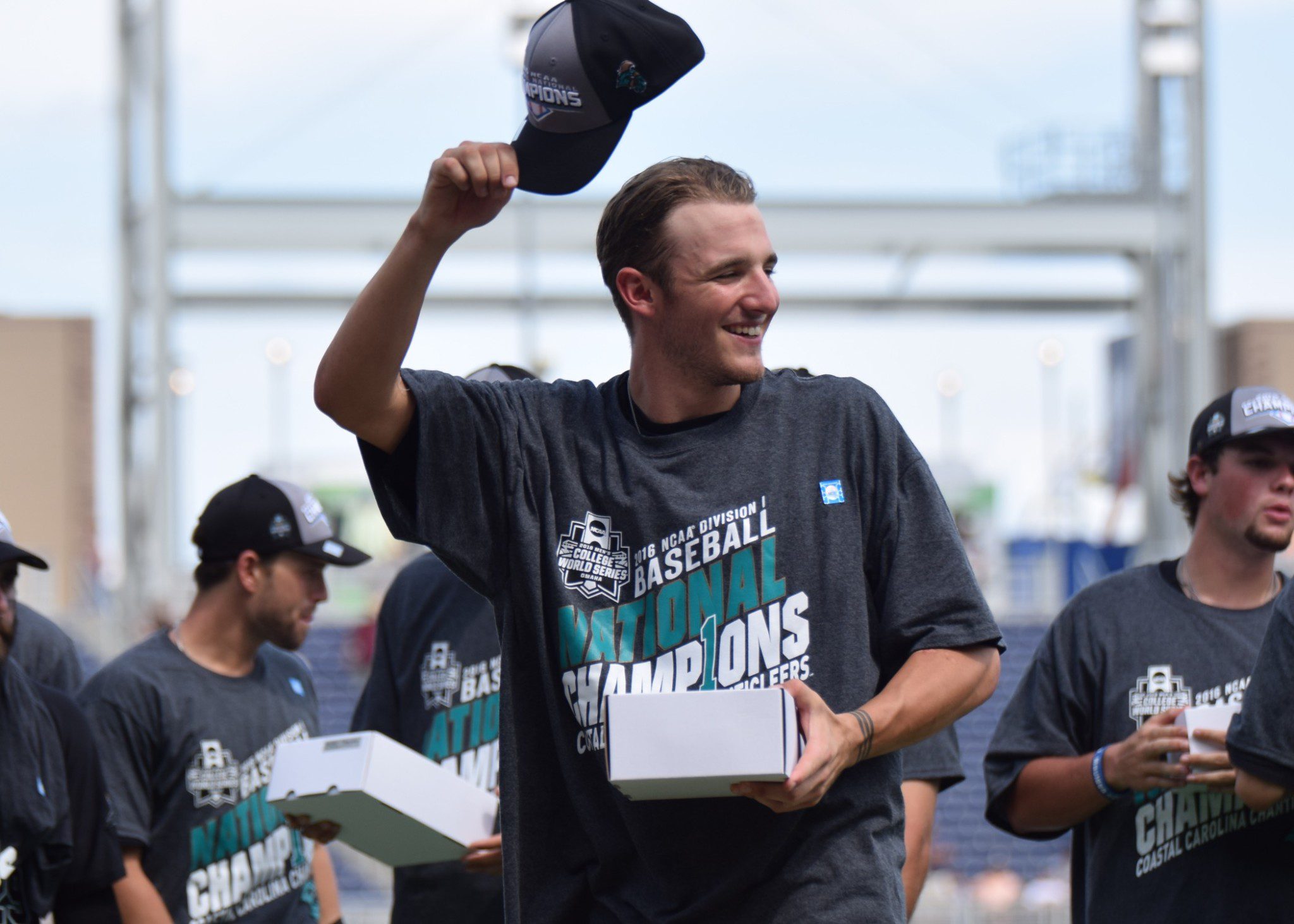 And finally, after stormy weather pushed the decisive game from Wednesday night to Thursday afternoon, the final chapter began. Beckwith did his part again, holding Arizona to two unearned runs over 5.2 innings of work to finish the CWS 3-0, 0.76 and earn the Most Outstanding Player award.

Parrett did his part again, drawing a leadoff walk in the top of the sixth that sparked a four-run rally — and Coastal would need every one of those four runs against a relentless Arizona team that doesn’t seem to comprehend the notion of quitting. Two errors by Arizona’s best player, senior second baseman Cody Ramer, led to two runs later in that frame, and Young made sure the Wildcats paid extra for their mistake, punctuating that rally with a massive two-run homer over the right-field bullpen on a hanging Bobby Dalbec curveball. Later, as Young hugged one family member after another on the field, he told one of them, “I picked the right time to sit on a curveball.”

“We took full advantage of one mistake that they made, which I don’t think they made too many mistakes,” Marks said later. “That’s a great ball team over there. And we made the most of our opportunity. And like I was telling someone out there, I knew it was time. That ballpark wasn’t holding G.K. this whole tournament, no way. No way was it.”

But even with a 4-0 lead, this story wasn’t over yet. This tale was just too good to end with the anti-climax of an easy four-run victory. It had to come down to the wire.

The Wildcats fought back immediately, taking advantage of a Coastal error to score two runs of their own in the bottom of the sixth. But Holmes did his part again, inheriting a two-on, two-out jam in the sixth inning and striking out Louis Boyd to end the threat. 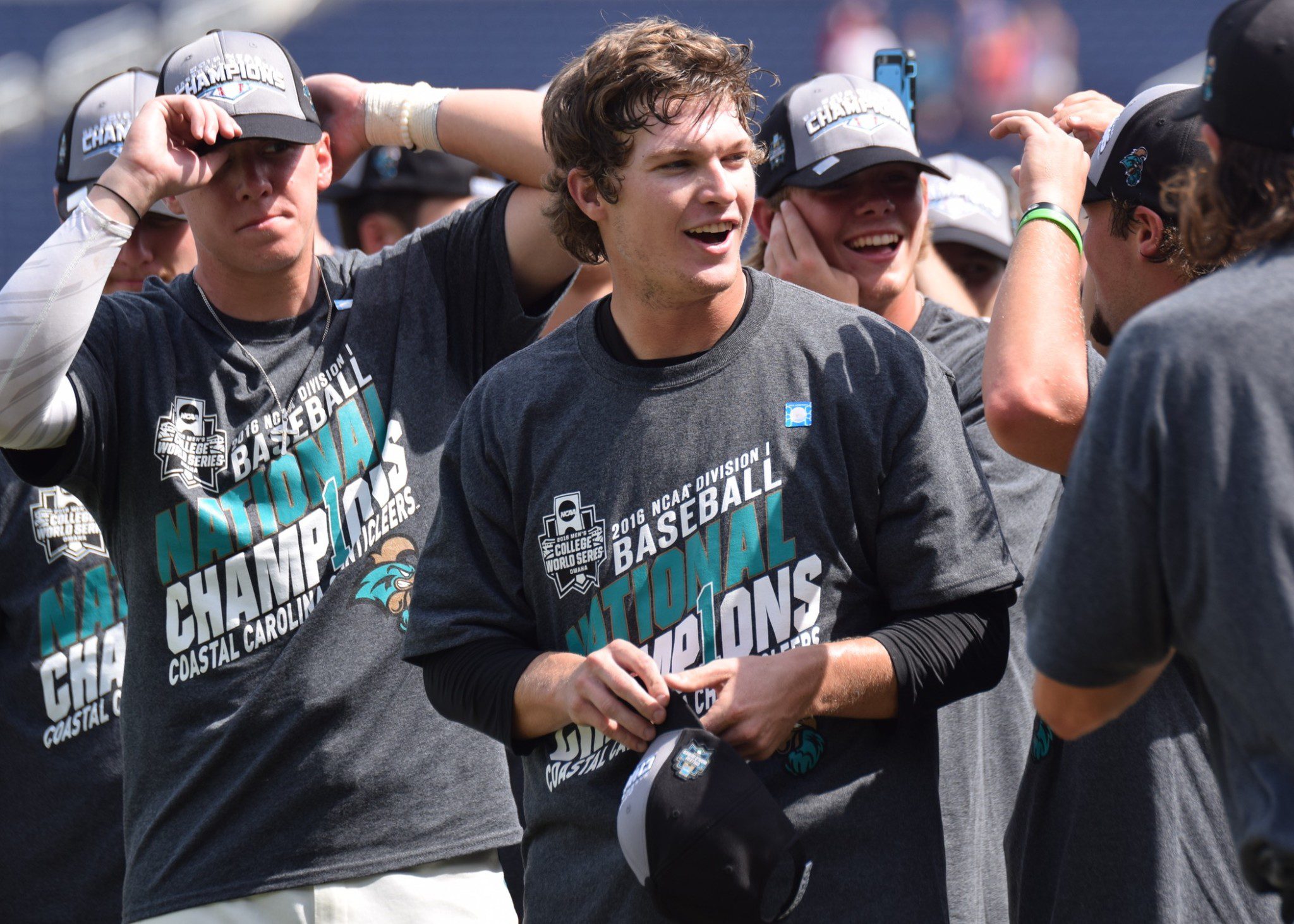 From that point on, it was Cunningham’s game. He got through the seventh and the eighth unscathed, but a walk by Boyd and a single by Ramer put the Wildcats in business. A Zach Gibbons sacrifice fly brought Arizona within one run, 4-3. Then Ryan Aguilar went the other way for a double into the left field corner. Cunningham spun around to watch the ball, and when it dropped fair, he recoiled as if he’d been shot. Surely the fleet-footed Ramer would score from first base on the play to tie the game — how could he not?

But somehow, Marks tracked the ball down and got it to the cutoff man in impossibly quick fashion. Ramer skidded around third and retreated to the bag.

“It’s the play of the season in college baseball. I can’t believe it,” said Arizona coach Jay Johnson, who was coaching third base. “I told them that when I walked through the line and I congratulated him. We play aggressively. And, I mean, it’s live by the sword and die by the sword, and with two outs we’re sending guys. And the shortstop had the ball when Cody, who is a great runner, was at third base. He would have been out by 100 feet and it’s only 90 feet, I know that. I can’t believe the play was made.

“I’m probably going to have nightmares about that little rat in left field running around and making that play. I say that with, if you know me, that is a big-time term of endearment.” 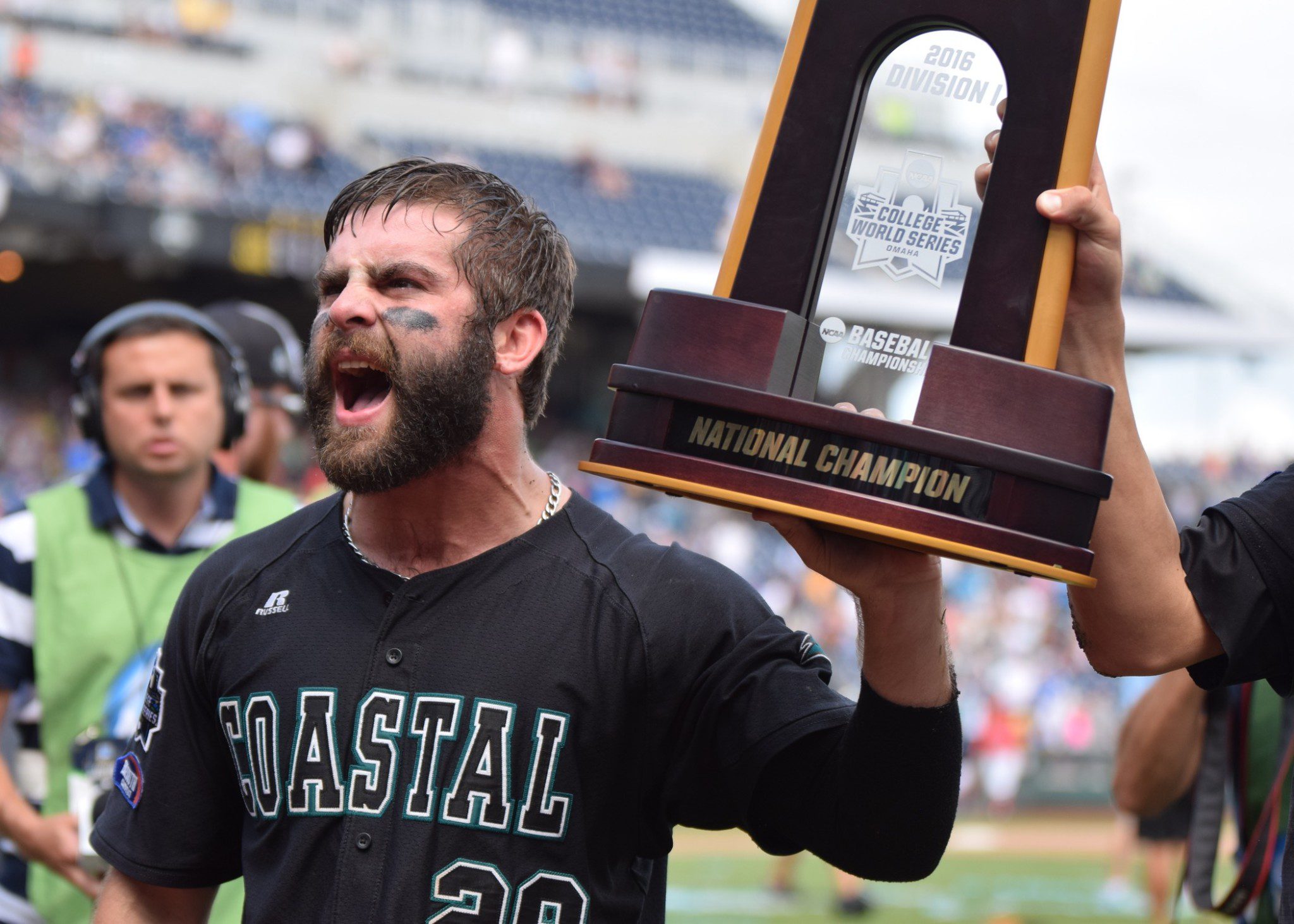 But the job still wasn’t done. The stage was set for one of the most intense finishes in College World Series history — runners at second and third, two outs, a single probably results in a walk-off win for Arizona, but an out results in a national championship for Coastal Carolina.

“I think if you go back and look from the seventh inning on, I don’t know if I unfolded my hands the entire time we were playing,” Gilmore said. Cunningham quickly interjected, “Sorry about that, Coach.”

But this stage and this moment were not too big for Cunningham, who collected himself and stared in against Arizona catcher Ryan Haug, who had entered the game after regular catcher Cesar Salazar was hit in the head by Paez’s bat on a follow-through in the seventh. Cunningham later confessed that in high school, he had lost the state championship three years in a row (“Now you tell me,” Gilmore quipped back at him).

“And I was not going to lose this, I promise you that,” Cunningham said. “Coach Thomas came out there and had a meeting and said, ‘Intent, intent, intent is going to win you this game, this pitch, this battle, whatever.’”

Cunningham proceeded to enforce his intent, blowing away Haug on a high fastball to end the game. He strode off the mound — with intent — and made a fist, then put that fist to his heart. He gave his dugout a military-style salute. He whipped off his glove and hurled it over his shoulder. He accepted a hug from Parrett, his catcher. And then he disappeared in a sea of black-and-teal jerseys.

Not too far away, in front of the Coastal dugout, Gilmore disappeared too — enveloped in a massive group hug with his coaching staff. 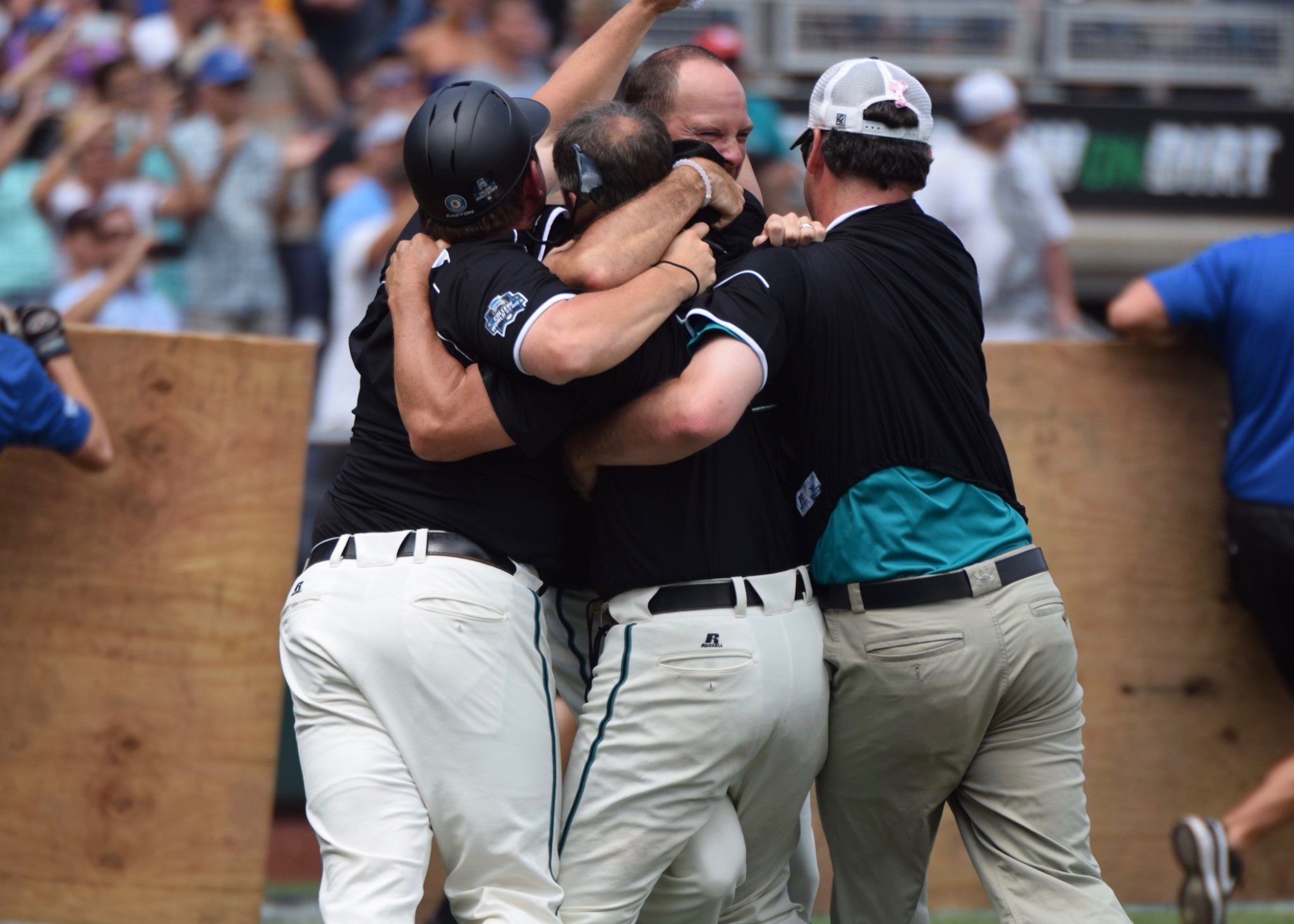 Finally, after all those new beginnings, this story had reached the end.

“You look at who we had to beat. To do this is an incredible feat,” Gilmore said. “I don’t care what team you are. To go through LSU and then come here, Florida, TCU, Texas Tech, TCU twice, and these guys, three times, it’s an incredible journey for any program. This for me has to go down as one of the better competitive teams of coming through the hard knocks, the toughest bracket and the whole nine yards. I don’t know that there was just like one moment in our whole journey that kind of turned it around.”

No; there were many defining moments, and viewed all together they tell a story for the ages. Someday in the distant future, when Gilmore looks back on this season, his memory will be flooded with so many images of this incredible journey, and all of the players who made it a reality.

“Whenever I die, I’ll know that this group of guys here, they willed themselves to be national champions,” Gilmore said. “They truly did.”