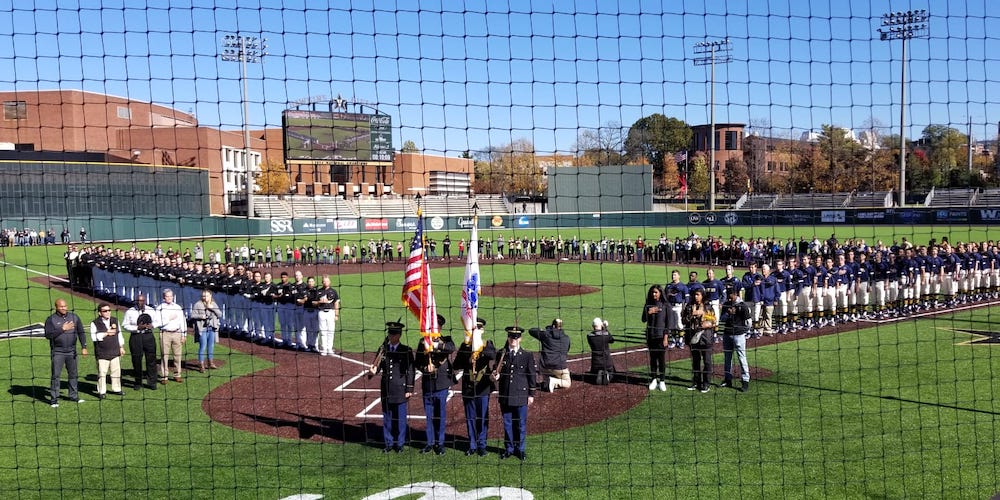 Michigan and Vanderbilt fought it out yet again this past weekend. (David Seifert)

NASHVILLE, Tenn. —  In a rematch of the 2019 CWS Championship game, The David Williams Fall Classic took place at Hawkins Field on the Vanderbilt campus. The exhibition honored the late Vanderbilt vice chancellor for athletics and university affairs and athletics director while promoting diversity and inclusion.

The Commodores participated as the Nashville Stars while the Wolverines competed as the Detroit Stars, both former Negro Major League teams. At the end of nine innings, Detroit defeated Nashville by the score of 3-2 (boxscore).

According to a Vanderbilt press release, Vanderbilt worked closely with Nike, Music City Baseball and the Negro League Baseball Museum to develop the uniforms which pay tribute to Nashville’s diverse baseball tradition.

“It is with great pride that we take the opportunity to honor our former colleague and friend, and name our fall scrimmage with Michigan as the David Williams Fall Classic,” Vanderbilt head coach Tim Corbin said. “This gives us all an opportunity to recognize David and his family for his work to promote diversity and inclusion as well as recognize the positive contributions to American society of the Negro Baseball Leagues. Our connection with the Michigan program, especially as it pertains to diversity specific to college baseball, makes for a natural date for both schools.”

Bob Kendrick, president of the Negro League Baseball Museum, was among those in attendance. He delivered a moving pre-game tribute from his heart with the message to love the game while honoring the late David Williams.

“The Negro Leagues Baseball Museum is excited to have a role in the inaugural David Williams Fall Classic,” said Kendrick. “It’s important that college baseball players and fans understand the transcending impact that the Negro Leagues had on the game and society, and I am thrilled that two premier programs such as Vanderbilt and Michigan are honoring that legacy. Nashville is an appropriate place for this to happen, given the city’s importance in the civil rights movement, higher education and sports. David Williams was a trailblazer in his own right, a man who called both Michigan and Nashville home and who cared deeply about the history of African Americans and sports.”

With starting lineups bearing little resemblance to those from the recent CWS finale, especially the ‘Dores whose lineup included five freshman and just one (Harrison Ray) returning starter, the most intriguing matchup was on the mound. Highly-touted true freshman righty Jack Leiter took the mound for Vanderbilt and was opposed by redshirt freshman lefty Steve Hajjar of Michigan. Both are potential Day One picks for the 2021 MLB draft. Leiter worked two innings, allowing two runs with four strikeouts. He often pitched to the top of the zone with his 90-94 mph fastball and moved hitters’ eyes with a big breaking 75-77 mph curveball. With a tight strike zone and a lively fastball, Leiter walked three batters, with one scoring on a two-run double in the second inning. The line drive double was laced down the right field line by sophomore second baseman Riley Bertram, who was again hitting in the 9-hole, just as he did in the CWS championship game. The drive opened the scoring in the contest, putting the Wolverines on top 2-0.

Vandy countered with a run in the bottom of the third as Tate Kolwyck scored from third base on a wild pitch after he had walked, stole second and advanced to third during a pickoff attempt and ensuing rundown. “Tate is a gamer. The thing about Tate is that he’s a willing participant. He will do whatever he needs to do…Tate’s center point is the team,” stated Coach Corbin while praising Kolwyck post-game.

The score remained 2-1 for several innings with Vandy sending impressive arm and after impressive arm to the mound. Freshman righty Michael Doolin relieved Leiter and worked two perfect innings, filling up the strike zone with an easy 88-90 mph fastball and repeated his delivery pitch after pitch. Doolin struck three of the six batters he faced. Sophomore Ethan Smith followed in the fifth with a scoreless inning and one strikeout.

Another true freshman, right-hander Sam Hliboki, then relieved Smith to start the six inning. The California native Hliboki dominated, striking out five of the six batters he faced with a plus slider and 89-90 mph fastball.

Next up on the mound for the Commodores was Luke Murphy who overpowered the Wolverines for a quick 1-2-3 inning with a 94-96 mph fastball and hammer curveball. Murphy is a 6-foot-5, long bodied redshirt freshman who sat out all of the 2019 season while recovering from Tommy John surgery.

Over in the other dugout, the Wolverines sent a Tommy John recipient of their own to the mound for the seventh, redshirt sophomore, Ben Dragani. Still working his way back to what made him the top pitcher in Wisconsin during his senior year of high school, Dragani was effective with a scoreless inning, mixing an 83-85 mph fastball and a deceptive 76-77 mph changeup.

Vanderbilt tied the score at two in the eighth on a Spencer Jones single to left field off Wolverine lefty and eventual winning pitcher Jacob Denner. Jones went the other way with a well stroked line drive through the 6-hole, bringing home Harrison Ray who had reached on an error to lead off the inning.

Michigan then led off the ninth with single by junior shortstop Jack Blomgren who then scored the go ahead run (unearned) on an error off the bat of junior catcher Joe Donovan.

With Michigan now leading 3-2 in the bottom of the ninth, the lead off man for Vanderbilt reached base. The Commodores ignored an unwritten rule in baseball; Play for the Win on the Road, a Tie at Home. This exhibition game was only scheduled for nine innings, no extras, so a tie wasn’t an option. The Commodores swung away and played for the win, only to come up short, leaving the tying run on first base.

Offensively, catcher CJ Rodriguez led Vanderbilt with two of their five hits, while Jones had the lone RBI. Michigan managed three total hits, one each by Blomgren, Donovan and Bertram.

The two most highly regarded prospects for the 2020 draft who played in the exhibition were Michigan outfielders Jordan Nwogu and Jesse Franklin. Neither could get much going offensively, but both were sound defensively with Franklin running down a couple fly balls in right center and showing an average arm. Nwogu displayed below average arm strength, but it looked improved from last spring, ran a 4.24 to first base on a 6-3 groundout and showed his huge hand strength and plus raw power during batting practice, crushing balls well over the left field fence. Franklin has adjusted his swing from this summer in the Cape Cod League, as he set up in the box with a more upright stance. There’s still length to his swing, but he did show an improved swing path.