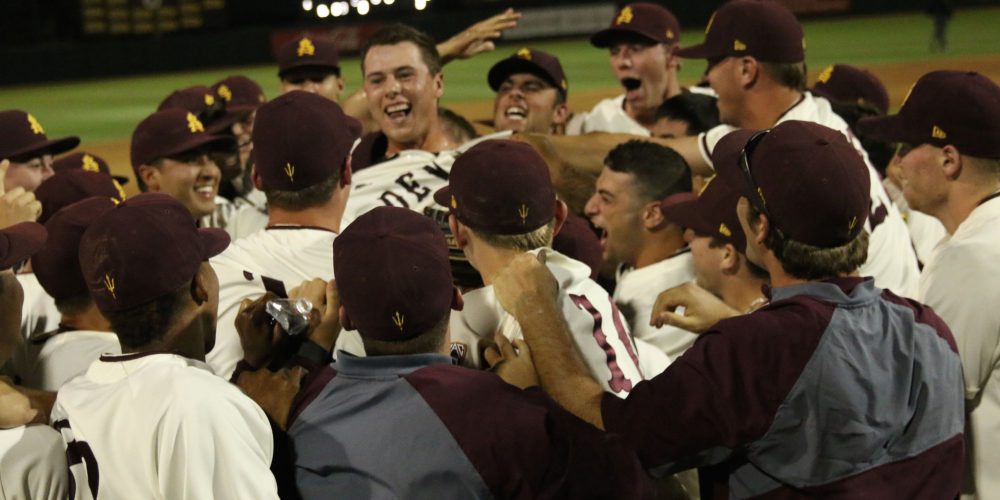 Good luck deciding who turned in Friday’s best pitching performance. Nominee No. 1, for your consideration: Arizona State sophomore righthander Ryan Hingst threw the 10th no-hitter in the program’s storied history in a 5-0 win against Utah. Hingst walked three and struck out nine in his 121-pitch outing, throwing 81 strikes. 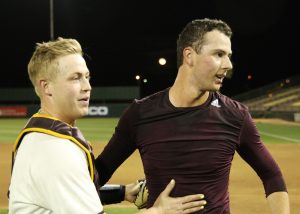 Arizona State coach Tracy Smith said that Hingst dominated almost exclusively with his fastball, which sat in the 90-93 mph range. The 6-foot-4 Hingst has always had good extension in his delivery that makes his fastball play up, and when he locates it, he’s very tough. He also held his velocity deep into the game, still touching 92 in the ninth.

The Sun Devils, who carried a five-game losing streak into the night, sorely needed a pick-me-up on the mound, as last week their No. 2 and No. 3 starters both failed to make it out of the first inning. Hingst stepped into the weekend rotation and delivered in a big way.

“We needed it,” Smith said.

ASU's @RWHingst talks about his no-hitter, and when everyone on the team went silent until that final out pic.twitter.com/pBJ01fQhUs

Nominee No. 2: The Citadel’s Sears, a sophomore lefthander, racked up 19 strikeouts over eight innings in a 10-2 win against VMI on Friday — the most strikeouts recorded by any pitcher this season. Sears allowed a run on three hits and two walks, but he was untouchable for a long stretch in the middle of the game. From the fourth inning until the eighth, Sears retired 15 straight batters — 13 via strikeout. He became the first Citadel pitcher to strike out 19 in a game since Mark Cherry in 1983. The Bulldogs, by the way, supported Sears with a season-high 18 hits, led by four from William Kinney. They improved to 10-12 on the season, but 1-0 in Southern Conference play.

Nominee No. 3: South Carolina’s Braden Webb, who struck out 14 in a series-clinching road win at Ole Miss. Mark Etheridge was on hand for that one and filed this report.

3. Willie Abreu does it again

For the second straight Friday, Willie Abreu lifted Miami to a thrilling win against a ranked opponent with a walk-off home run. Last week, Abreu’s walk-off grand slam beat Louisville. This week, Abreu delivered an opposite-field, two-run shot against Clemson closer Alex Bostic to lift the Hurricanes to a 9-8 victory. Abreu knew it right off the bat (which he immediately flipped as he spun toward first base).

It was a sloppy game that featured five errors (four by Clemson) and a late-innings meltdown of sorts by the Hurricanes, who coughed up a 7-2 lead over the final three frames. Drew Wharton’s two-run single against Bryan Garcia had given Clemson a temporary 8-7 lead in the top of the ninth, but Johnny Ruiz led off the ninth with a double, setting the stage for Abreu’s latest heroics. The rest of this series could be similarly entertaining; both teams are 5-2 in the ACC and playing with a lot of swagger.

4. Rumors of Texas’ demise have been greatly exaggerated

Many Texas fans must have written off their team after the ‘Horns dropped their third straight weekend series last weekend, losing two of three to Tulane to fall to 8-12 overall. And sure, there was legitimate cause for some concern, but the Longhorns have played one of the nation’s toughest schedules, with series against Stanford, Cal and UCLA as well as Tulane, so they deserved a little slack. Texas has rallied since last weekend, playing a strong game in an 11-2 midweek win against UTSA, then winning a huge series against No. 6 TCU this weekend.

After winning 4-3 on Thursday, the Longhorns rode a strong start from Ty Culbreth (6.1 IP, 4 H, 0 R) and flawless bullpen work to a series-clinching 2-0 win Friday. UT scored both of its runs in the sixth, highlighted by Tres Barrera’s solo home run. TCU starter Brian Howard went the distance in defeat, striking out nine without issuing a walk, but Texas pitched better. The Longhorns are now 11-12 overall — and 2-0 in the Big 12. There is plenty of time for them to make a run, and perhaps this weekend will serve as a springboard.

Tres Barrera makes the dive, fires in time to get the out at first. #SCTop10 pic.twitter.com/sH62Aw3Tq9

Heading into the season, the matchup between Virginia’s Connor Jones and Louisville’s Kyle Funkhouser looked like it could be one of the season’s best. Both were preseason All-Americans with superb pedigrees, vying to be drafted among the top 10 picks this June. But while Jones has lived up to his billing during an extremely consistent first half of the season, Funkhouser has scuffled, and those trends continued Friday night in Virginia’s 6-3 road victory in the series opener.

Jones held Louisville’s dangerous offense to three runs (two earned) on five hits and three walks while striking out four over 7 1/3 innings. It wasn’t a spectacular line, but as usual, he went deep into the game and put his team in position to win. In fact, Jones has now logged seven or more innings in five of his six starts this season.

Funkhouser, meanwhile, gave up five earned runs on seven hits and four walks over 6 1/3 innings to fall to 2-2, 4.89 with 32 strikeouts and 23 walks in 35 innings. He looked good over two scoreless frames to start the game, but slugger Matt Thaiss tagged him for a three-run homer to right-center in the third, and Virginia was largely in control of the game from that point on. Thaiss’ middle-of-the-lineup running mate, Pavin Smith, added another three-run homer in the seventh to give UVa. some breathing room. Now, the Cavs need to show they can keep it up throughout the weekend (they are 1-4 on Sundays this year). It won’t be easy against a Louisville team that will have a distinct edge on the mound in each of the next two games with lefties Brendan McKay and Drew Harrington toeing the rubber.

Some thought we were a little bullish on the Golden Bears coming into the season, especially once two-way star Lucas Erceg transferred out to head to Menlo (Calif.) College. But, this Cal team is quietly meeting expectations so far this spring, beating Oregon State 5-0 at home to clinch an important series.

While righthander Daulton Jefferies shined in the series opener, it was veteran righty Ryan Mason’s turn to dance in Game Two, as he struck out seven, walked just one and allowed four hits in a complete game shutout. Mason was rock-solid against the Beavers, throwing 104 pitches (70 of them for strikes). For the Beavers, righty Jake Thompson, who was terrific last weekend, wasn’t so much on Friday, allowing five runs on nine hits in 5.1 innings, while the Bears received another stout performance from rising catcher Brett Cumberland, who smacked a key home run in the contest.

Overall, this California team will be extremely dangerous as the season progresses. They are more battle tested than most teams around the country, and they’ve got some talented and productive veterans occupying some major spots in the lineup and rotation.

One of the biggest questions coming into the season for North Carolina was the arm of hard-throwing righthander J.B. Bukauskas. Though Bukauskas had some high moments as a freshman last season, he was inconsistent and wasn’t always crisp.

He was very crisp on Friday in an 8-0 home win over Georgia Tech. Bukauskas struck out 11 and showed impeccable command with no walks. He also allowed just four hits in eight innings.

The Tar Heels were already in good shape with Zac Gallen spearheading the weekend rotation, but they’re in even better shape with Bukauskas forming into the pitcher we thought he might be out of high school. For the season, Bukauskas now has a 2.70 ERA in 33.1 innings, along with 49 strikeouts and 15 walks, with teams hitting him at just a .225 clip.

When someone asks about Ole Miss on the radio these days, the first thing I point to is the starting rotation and how there are still at least some question marks about that unit. Friday’s 9-5 series-clinching victory for South Carolina or Ole Miss proved that much.

Braden Webb was terrific in a road win over Ole Miss. (Kendall Rogers)

The Gamecocks are excited about the future with Webb, and it was even easy to see why a few weeks ago against Clemson. Though things needed a bit more consistent overall, he showed a big-time arm with a fastball into the mid-90s, along with a nasty hammer curve. Against the Rebels, Webb was outstanding at times, striking out 14, walking two and allowing three runs on four hits in eight innings.

For the South Carolina offense, freshman catcher Chris Cullen had a performance to remember with three hits, one of them a double and two RBIs, while Gene Cone set the stage atop the lineup with a pair of hits.

4. Florida State Gets Past NC State

If you are a fan of starting pitching, you aren’t a fan of Friday’s 9-5 Florida State victory over NC State.

FSU starting pitcher Mike Compton struck out two and was lifted after allowing four runs on six hits in 3.1 innings, while NC State starting pitcher Joe O’Donnell fared even worse, allowing five runs before he could even get out of the first inning.

Seminoles freshman catcher Cal Raleigh hit his sixth home run of the season, while Jackson Lueck had a double and three RBIs. FSU also received solid production from Taylor Walls and Dylan Busby, who combined for five hits and led the charge.

FSU still needs to win another game this weekend to take the series, but it couldn’t’ have started off a weekend in better fashion considering the start from Compton.

5. Night Of The Complete-Game Shutout

Several pitchers around the country chipped in big-time performances Friday, but two in particular stood out as some of the nation’s best.

• McNeese State senior righthander Kaleb Fontenot was terrific in a 3-0 win over Abilene Christian. Fontenot struck out 12, walked three and allowed just two hits in the complete game shutout. He threw 105 pitches in the contest.

• Pittsburgh desperately needed a strong start from senior righthander Aaron Sandefur after losing the series opener to Boston College, and got just what the doctor ordered. He struck out 12, didn’t walk anyone and allowed just five hits in a complete game shutout performance and 5-0 triumph.