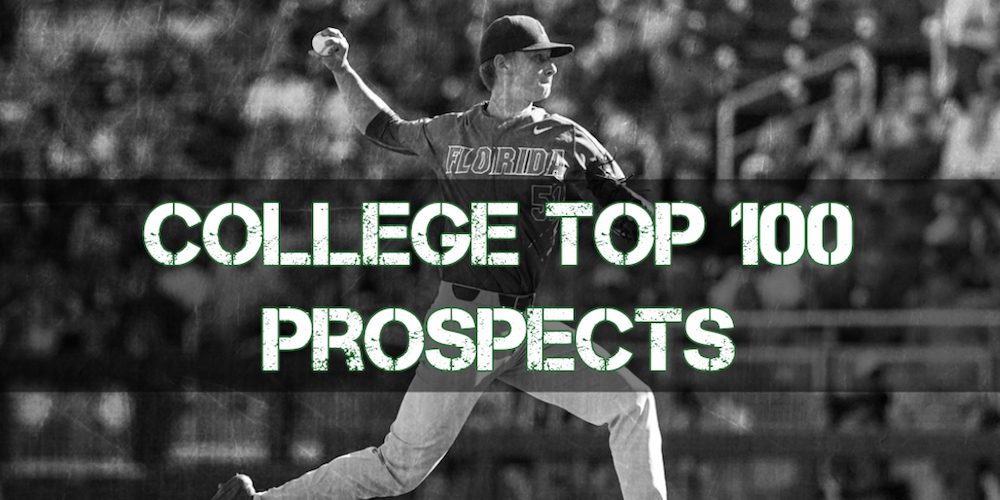 The college baseball season is now just a few weeks away, but with practices beginning, scouts from across the country will flock to diamonds looking to get a glimpse at some of the nation’s premier prospects. As our 2018 College Season Preview kicks off, it’s time to unveil our Top 100 College Prospects.

While some decisions within the rankings weren’t so difficult, the debate for the top spot was more contentious than one might think. Sure, the industry consensus, though still early, points to Florida righthander Brady Singer as the nation’s top college prospect, but others also had strong cases. For instance, Ole Miss draft-eligible sophomore Ryan Rolison was outstanding at the Cape Cod League last summer and is an elite lefthander with multiple pitches, while Auburn righthander Casey Mize might have the best stuff of anyone in the top five, but needs to show he can stay healthy throughout the 2018 campaign. There’s also Stetson righty  Logan Gilbert, who blew up at the Cape this past summer and has a huge arm, while Oregon State’s Nick Madrigal, despite his size, rounds out the top five with his incredible skill set. Hard-throwing South Florida lefty Shane McClanahan could see his name move into that top five with a strong start to the spring, while Florida righty Jackson Kowar has electric stuff and could move up a few spots if his stuff this spring mimics the arsenal he showed off at the end of the College World Series last June.

Several teams who are destined to be high in our Preseason College Top 25 Rankings are well represented in the College Top 100. Arkansas, Florida, Florida State, Kentucky, LSU and Oregon State lead the way with four ranked players each, while Stanford, TCU, Texas and Texas Tech have three each.