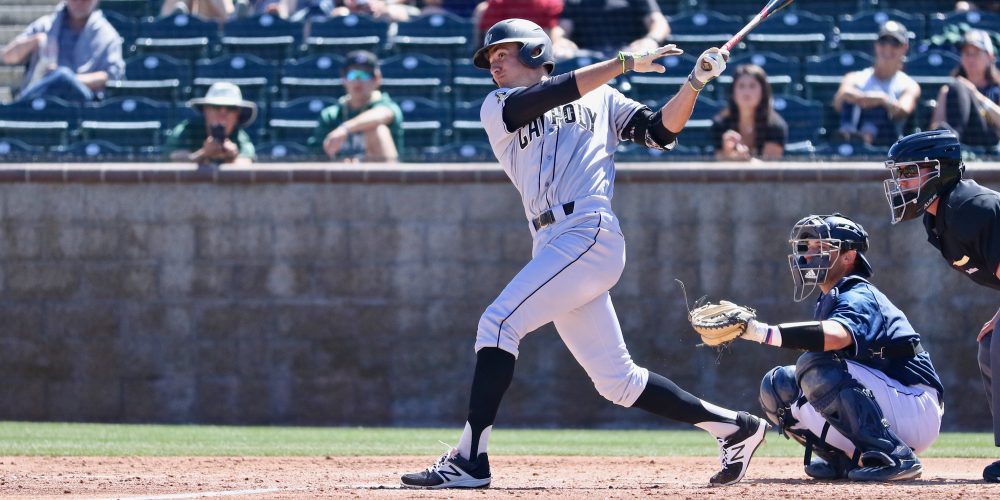 New this year at D1Baseball we jump into the statistics of baseball, providing analytic content, in addition to the scouting and reporting we have always brought you. To begin, we’ve put together an analytics-based version of our Preseason Top 100 Prospects list.

Criteria for hitters are broken into three categories: Plate Discipline (K%, BB%), Hit Ability (BABIP, OBP, SLG), and Game Power (ISO, HR%). Players’ scores were weighted by their school’s strength of schedule to correct for varying levels of difficulty within Division I. Non Division I players are not included because their data differed significantly from the rest of the players in the Top 100. Data was taken from the 2016 & 2017 NCAA seasons and the 2017 Cape Cod League season. The grades for each statistic were weighted and combined into a category grade. These category grades were then weighted again and combined into a final grade. Here’s a closer look at our grading system:

As we wrote in our 2017 in Review: Top MLB Draft Stories, college bats who pass the analytics test tend to rise on draft day. Last season Adam Haseley went from a second-to-third-round type of prospect in the preseason to the eighth overall pick in the draft largely based on his 2017 spring season. His previous college seasons and Cape Cod League performance were solid, yet unspectacular. This year the college hitter making a leap could be Alex McKenna from Cal Poly. McKenna is currently regarded as a second/third-round prospect. He has posted similar, albeit better, slash lines at the same age for both his college team (.314/.389/.452) and Cape Cod (.298/.346/.403) than did Haseley (.275/.368/.407) at Virginia and in the Cape (.266/.352/.392). Even more interesting, from a pure scouting perspective, they are both instinctive, similarly built (6-1, 195 pounds) and similarly tooled players (50/55 arm, 55 defense, 55 run, 50/55 hit). Haseley might have slightly more present game power (45/50), while McKenna draws present power grades that range from 40 to 50 depending on which scout you ask. But McKenna is a looser bodied athlete whose power may arrive later, and some scouts project him to have 55 future power. Overall, they are both college center fielders who may shift to a corner in the future.

Without further ado, here’s an analytical ranking of the 44 hitters who appeared in our preseason Top 100: