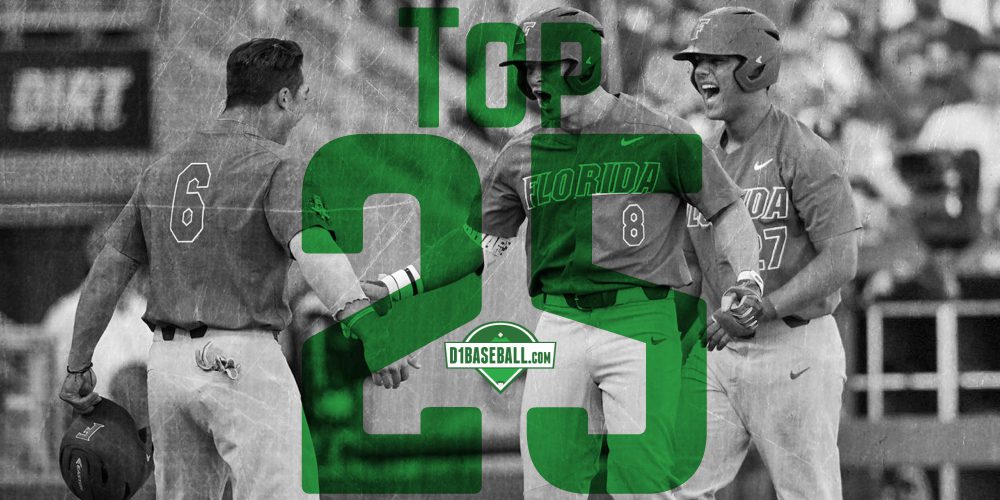 Fresh off the first national title in program history, Florida once again is expected to have a dominant campaign as it headlines the 2018 D1Baseball Preseason Top 25.

The Gators met expectations throughout the 2017 campaign. They began the season ranked No. 2 in our preseason rankings before storming through the regular season and beating SEC rival LSU to win the national title. Now, UF hopes to repeat as national champions with the return of a terrific weekend rotation with Brady Singer, Jackson Kowar and Tyler Dyson leading the charge, along with the return of All-American reliever Michael Byrne.

The Gators aren’t the only team from last year’s College World Series field expected to have a strong 2018 campaign. For instance, Oregon State comes in at No. 2, Florida State is No. 6, TCU returns a plethora of pitching and comes in at No. 7 and Texas A&M enters the season at No. 10 in our rankings.

Though the ACC was the most highly touted league in our preseason rankings last year, the SEC takes back that label entering the 2018 season. The Southeastern Conference has eight teams in our rankings, while the ACC has the second-most representatives with No. 25 Duke as the surprise to some. There’s also the Big 12 with four teams – Texas Tech, TCU, Texas and West Virginia – headlining, while the Pac 12 has three teams (Oregon State, UCLA and Stanford). Leagues with one representative include the American, Big Ten, Sun Belt, Missouri Valley and Big West.

The D1Baseball Top 25 was compiled by editors Kendall Rogers and Aaron Fitt and will be updated every Monday morning throughout the season.

D1 Baseball Staff
wpDiscuz
0
0
Would love your thoughts, please comment.x
()
x
| Reply
You are going to send email to