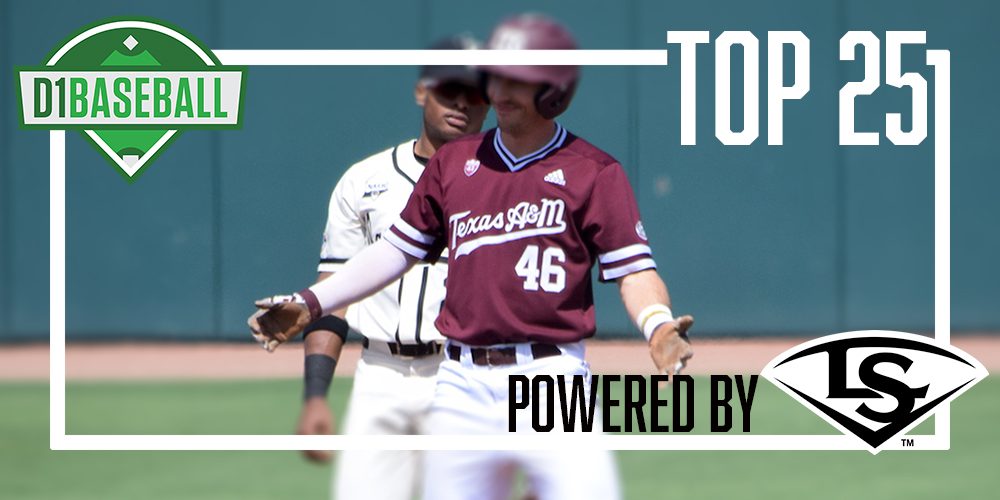 UCLA holds on to the top spot for the second straight week in the D1Baseball Top 25 rankings, powered by Louisville Slugger, after going a perfect 3-0, sweeping a conference series from Arizona. Mississippi State remains No. 2 after taking a series from Auburn,  which fell three spots to No. 15. Stanford stays at No. 3 after sweeping Utah.

Georgia and NC State move up one spot apiece to round out the top five. Georgia won a big series against LSU, which slid seven spots to No. 17. NC State went on the road and recorded its first-ever series sweep against Miami to move to 23-1 overall, and 8-1 in the ACC. NC State is the only ACC team in the top 10, with the SEC taking five spots and the Pac-12 four.

Preseason No. 1 Vanderbilt rebounded from its first series loss of the year by sweeping rival Florida. The Commodores move up two spots to No. 6, while the Gators fall to No. 23 after their second straight series loss. Oregon State hold steady at No. 7, and three teams enter the top 10 for the first time this year: No. 8 Arkansas, No. 9 Arizona State and No. 10 Texas A&M. The Sun Devils were the last unbeaten team in Division I before dropping Saturday’s game at Oregon, but they rebounded to win Sunday’s rubber game and improve to 22-1.

Other big climbers this week include Coastal Carolina, up five spots to No. 12 after taking two of three from Troy; and East Carolina, up six places to No. 14 after sweeping UCF. Texas Tech, TCU and Florida State all return to the top 20 following good weeks. The Red Raiders swept Michigan back out of the Top 25, and the Wolverines were replaced by fellow Big Ten contender Illinois, which returned to the rankings at No. 25.