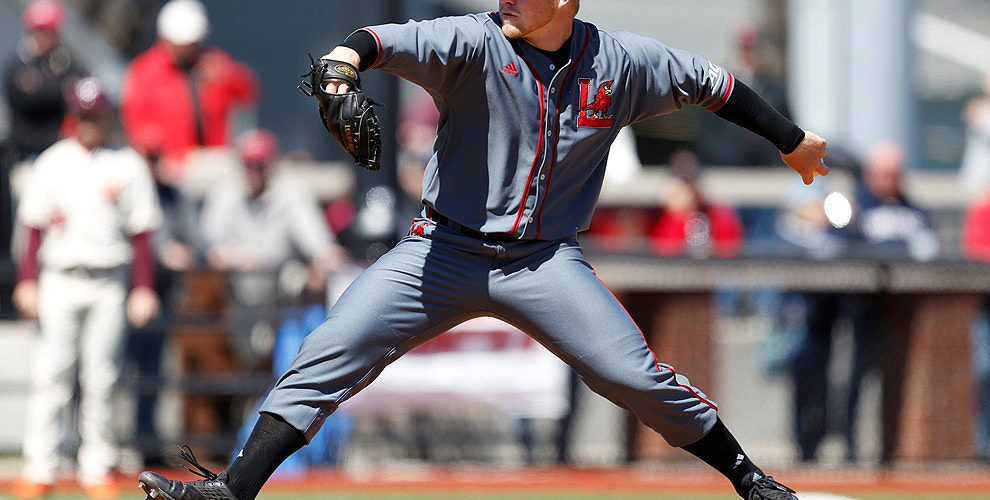 Much had been said the past few weeks about Louisville’s inability to win the more important series on its schedule. But that can no longer be stated as coach Dan McDonnell’s Cardinals captured a home series win over Clemson with a commanding 7-2 victory on Saturday.

Louisville lefthander Drew Harrington put together yet another quality start, striking out three and allowing just two runs in 6.1 innings of work despite giving up 11 hits. Meanwhile, Jake Sparger and Zack Burdi were solid in relief, and the offense was led by Will Smith who had a home run, and Danny Rosenbaum, who had a double and two RBIs.

With the series win, the Cards improved to 28-7 overall, are now 12-5 in the ACC and are up to No. 3 in the RPI. Meanwhile, as hot as Clemson has been the entire season, the Tigers, with back-to-back conference series losses, is now 8-9 in ACC play. The series finale is especially important to the Tigers, who want to host at the end of the season.

The Green Wave struggled in the series opener against Cincinnati, and didn’t exactly knock the cover off the baseball in Game Two of the series, but the talented lefty was terrific, striking out five, walking two and allowing just three hits in a complete game shutout, 1-0 win over the Bearcats.

As impressive as the first-year Greenie was, Cincinnati’s J.T. Perez also deserves plenty of credit for striking out two and allowing just a run on eight hits in eight innings of work.

For the season, Massey is a leading candidate to be a Freshman All-American, sitting pretty with a 1.64 ERA in 55 innings, along with 35 strikeouts and just nine walks, while teams are hitting him at a .222 clip.

Upset of the day: Duke over No. 1 Miami

So, we’re not that surprised at all that the Blue Devils actually won a game against the top-ranked Hurricanes this weekend, but the 12-5 score, while outhitting the ‘Canes 16-3 in the process is pretty surprising.

Miami lefthander Michael Mediavilla had a tough day on the mound, allowing eight runs on eight hits in just 1.2 innings of work, while Duke’s Zack Kone had a banner day, smacking a home run and going a perfect 5-for-5 with three RBIs. Meanwhile, Jack Labosky also hit a home run and finished the day with three RBIs, while Chris Perez added another home run for good measure and leadoff hitter Jimmy Herron had three hits to help lead the way.

While Miami hopes to flush this result going into the series finale, it presents a golden opportunity for the Blue Devils, who sit at 20-16 overall and three games under .500 in the ACC. A series win over the Hurricanes would give Chris Pollard’s club a marquee series triumph.


The rest of the story

• AGGIES DON’T HOLD BACK: Some concerns grew about Texas A&M after it got swept at Florida two weekends ago. Well, the Aggies responded by sweeping Georgia at home last weekend. And guess what? They’ve already clinched a road series win over sizzling Mississippi State with a 10-6 victory Saturday afternoon in front of an astonishing 15,078 fans in Starkville.

The story of the game is pretty easy in this one: The A&M offense. The Aggies have one of the nation’s best lineups, and the top four hitters in the batting order totaled 10 hits, with the rest of the lineup accounting for the other seven. A&M designated hitter Joel Davis had a double and triple to lead the charge, while Boomer White and Hunter Melton each had three hits, and suddenly red-hot Nick Banks had two more hits.

On the mound, MSU righthander Austin Sexton, who has been very good this season, left after the third inning because of a pulled hamstring, and might’ve been gone anyway after allowing five runs on nine hits, while for A&M, hard-throwing righthander Mark Ecker tossed four shutout frames out of the bullpen to save valuable pitching for the series finale.

A&M needed to make a statement, and it did just that on Saturday. But, it could accomplish even more by finishing off a road series sweep.

• BUKAUSKAS LEADS TAR HEELS: The Tar Heels dropped the series opener to Virginia on Friday, but the hard-throwing righthander J.B. Bukauskas made sure his team bounced back Saturday, striking out 11, walking two and allowing a run on four hits in seven innings in an 8-1 win over Virginia. 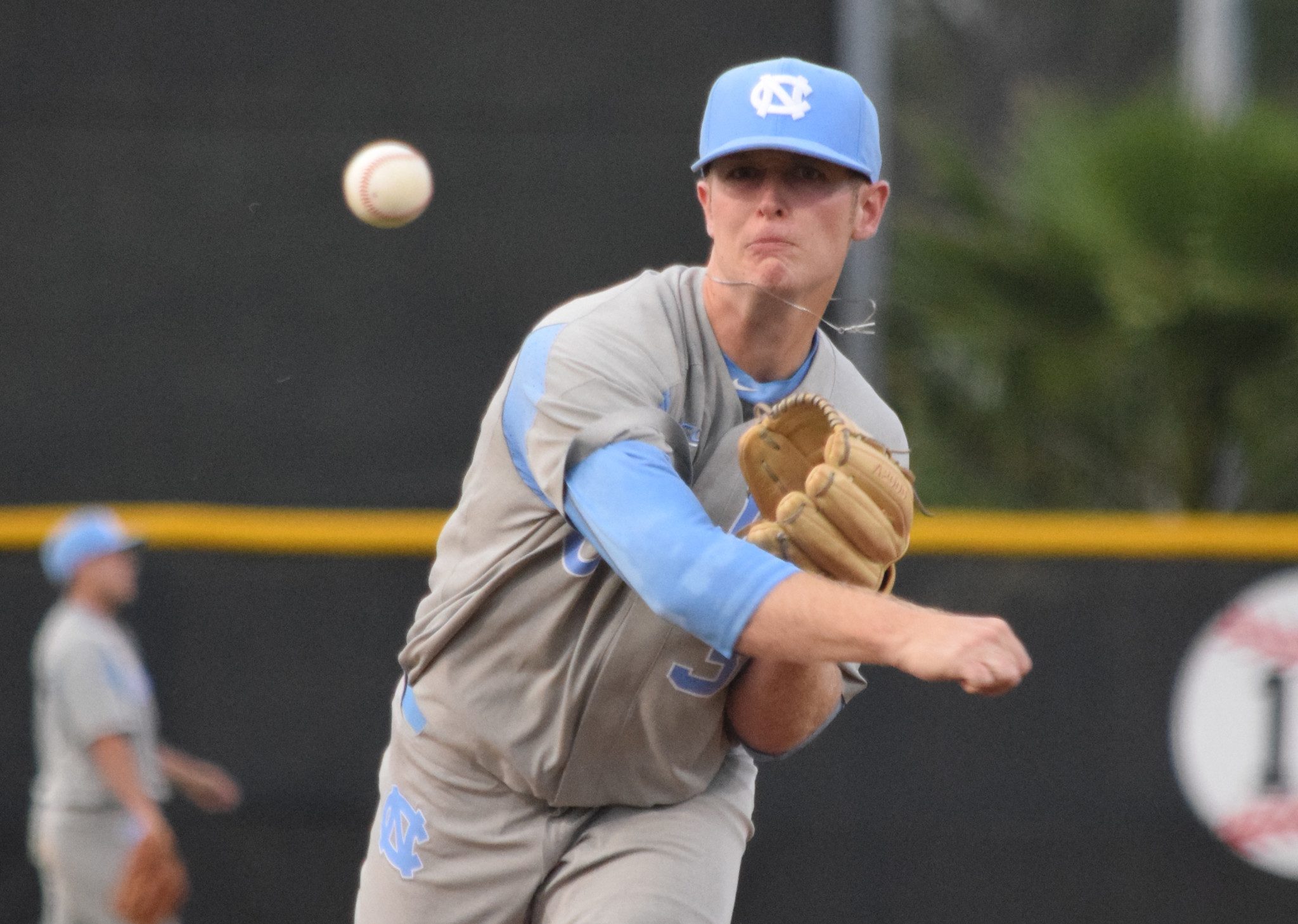 • GO AHEAD, JOIN THE PACK: Elliott Avent’s North Carolina State club has played extremely well the past few weeks, and they have yet another impressive series win with Saturday’s 15-6 win over Georgia Tech. The top four hitters in the lineup totaled nine hits, with Josh McLain registering three and knocking in two runs, while leadoff hitter Stephen Pitarra also had three hits and Joe Dunand knocked in three runs. With the win, the Pack is now 26-9 overall, 10-5 in the ACC, and most important, their RPI continues to climb.

• LSU MASTERS HOUCK: Missouri sophomore righthander Tanner Houck had been incredibly good the past few weeks, but the young LSU lineup had their way with him on Saturday in a 9-5 victory to clinch a big road series. Houck sat anywhere from 93-96, and struck out eight, walked five and allowed eight runs on six hits in 6.1 innings, while the LSU offense was led by outfielder Beau Jordan, who smacked a home run and knocked in five runs. The other story for LSU was the bullpen. After the bullpen was masterful on Friday, Parker Bugg entered Saturday and allowed just a run on three hits in three innings. Suddenly, LSU is getting a head of steam.

That ball was GONE! @beaujordan22 hit a bomb off of the scoreboard to give LSU the 9-4 lead. pic.twitter.com/RU01Dr42vs

• DORES BOUNCE BACK: Fresh off a road series loss at LSU last weekend, Tim Corbin’s Vanderbilt club hoped to get back on track this weekend. They did just that, clinching a series win over Kentucky with a 3-2 Saturday win. Vandy righthander Kyle Wright was solid, striking out five, not walking anyone and allowing a run on four hits in seven innings, while Bryan Reynolds led the charge with two runs batted in. The series loss is Kentucky’s first in conference play.

• SEMINOLES SURGE: After dropping the series opener to Wake Forest, the FSU offense got back to work on Saturday in a 13-8 Saturday win. FSU third baseman John Sansone had three hits, including a home run and two RBIs, while Taylor Walls had a big day with three hits and three RBIs and Jackson Lueck had two hits and five RBIs. Sunday’s series finale is especially big for the Demon Deacons, who have an RPI of 58 and a conference mark of 6-11.

• ARIZONA ACTION: The Pac-12 title race is an absolute mess right now, and Arizona took yet another step forward with a series win over Stanford, clinching it with Saturday’s 4-1 victory. Wildcats starting pitcher Cameron Ming allowed just five hits in seven innings, while Ryan Aguilar and J.J. Matijevic each recorded three hits. The Wildcats now have an RPI of 48 with an impressive 6-3 mark vs. RPI Top 50.

RT if you think Cody Ramer's play at 2nd should be a @SportsCenter #SCtop10 pic.twitter.com/QZB8qrhB3v

• PANIC TIME IN FAYETTEVILLE: Let’s get this off our chest right now: Dave Van Horn is still a Hall of Fame type of coach. Now, let’s talk about the current Razorbacks club, which by the way, is in a serious world of hurt and will miss the postseason barring a late-season surge. The Razorbacks fell to 4-11 in the SEC with an 8-2 loss to Florida, going 0-3 against the Gators for the weekend. UF righthander Alex Faedo stymied the Hogs offense with 10 strikeouts and just two walks in 6.1 innings, while Peter Alonso led the UF offense with a home run and three RBIs. As for Arkansas, it now has an RPI of 117 with a 2-11 record vs. RPI Top 50. In other words, it’s make or break time Kentucky, Texas A&M and LSU the next three weekends.

• MICHIGAN MAKES GOOD: The Wolverines were the favorite to win the Big Ten coming into the season and picked up a very nice home series win over Nebraska with a series-clinching 7-2 victory on Saturday. UM starting pitcher Oliver Jaskie allowed two runs in five innings, while five Wolverines relievers were just terrific, and the offense was led by second baseman Ako Thomas, who had two hits and three RBIs. While Michigan is in good shape, the Huskers need to take the finale and get some momentum with an RPI in the 80s.

• DUCKS TAKING FLIGHT: Don’t count out George Horton’s boys just yet. The Ducks were left for dead by yours truly a couple of weeks ago, but they’ve since won back-to-back conference series, clinching the USC series with a 12-8 win on Saturday. A.J. Balta led the offense with two hits and three RBIs, while Travis Moniot had two hits, including a home run, his third of the season. Oregon is now 6-5 in the Pac-12, 16-12 overall, and guess what? The Ducks are now into the 70s from an RPI standpoint after being in the triple digits a couple of weeks ago.

• SOUTHEASTERN STRIKES BACK: The Lions dropped the series opener to Louisiana-Lafayette in a series that could have huge at-large bid ramifications. However, Southeastern Louisiana struck back with a vengeance in Game Two with a 16-5 victory. The Lions touched up ULL starting pitcher Wyatt Marks for six runs on six hits in 2.1 innings, while stud slugger Jameson Fisher hit a home run, and Ryan Byers had a huge day with a home run and five RBIs. Meanwhile, Carson Crites also had a big day with three hits and four RBIs. Overall, ULL now has an RPI of 16 and Southeastern is sitting at 56. Clearly, the series finale is a little bigger for the Lions.

• FEIGHT TRAIN: UNC Wilmington improved to 22-9 overall with a 17-7 win over East Tennessee State. Well, Nick Feight had a strong day at the plate, smacking a pair of doubles, totaling three hits and knocking in six runs to lead the offensive charge.

• THE OG STILL HAS IT: Rice coach Wayne Graham has had an unbelievable coaching career, and he added yet another milestone to his resume with his 1,100th victory in a doubleheader sweep over Western Kentucky on Saturday. In the first game, lefthander Blake Fox struck out nine and allowed just two runs in eight innings, while Ricardo Salinas put together another quality start in Game Two to lead the charge. The Owls are in cruise control at 12-4 in Conference USA with a big series at Southern Miss on the horizon.