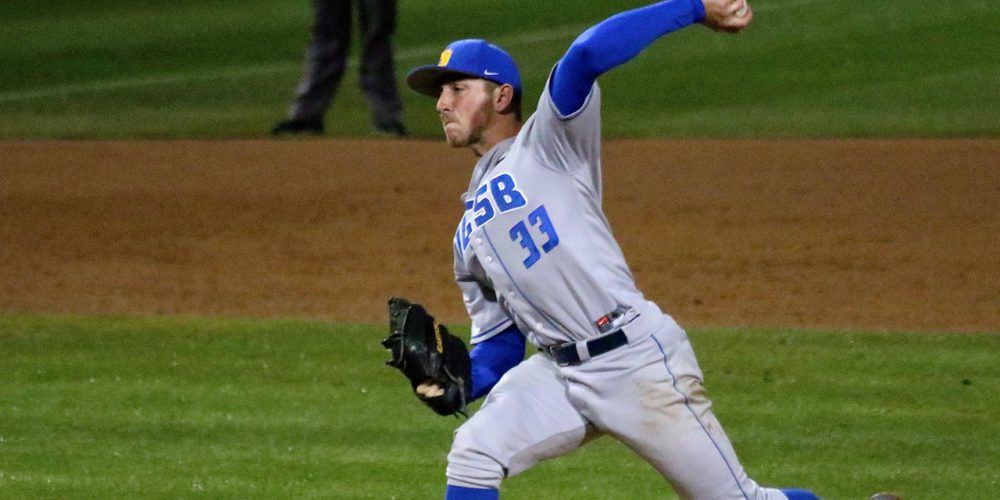 LOS ANGELES — It’s not supposed to rain in Los Angeles, yet there was a 95-minute delay to the start of the matchup between No. 8 USC and No. 11 UC Santa Barbara at Dedeaux Field.

Teams also aren’t supposed to have four weekend starters, but that’s essentially what Santa Barbara has. The Gauchos remained undefeated during the midweek, beating USC 2-1, thanks to seven sterling innings from lefthander Domenic Mazza.

Mazza was originally slated to be in UCSB’s starting rotation on the weekends this season after he spent last year working as a midweek starter and reliever. But when Mazza tweaked his ankle on opening weekend, he got Wally Pipp’d. Head coach Andrew Checketts inserted closer Dillon Tate into the starting rotation and he hasn’t looked back (as we noted in yesterday’s Golden Spikes spotlight on Tate).

That has allowed Checketts the luxury of turning the ball over to an experienced lefty in the middle of the week and when the Gauchos have four-game sets on the weekends.

“We felt like Dom could win on the weekends, win on a Saturday or Sunday for us, but he’s been able to do it on a Tuesday. He’s done a much better job with his fastball this year than he has in the past — pitching with it early in the game and pitching in and keeping people honest.”

He did just that against USC, mixing his pitches well and moving his fastball in and out to set up his “Bugs Bunny changeup,” as Checketts calls it. Mazza also got some help from his defense, including a pair of spectacular plays from Luke Swenson in right field.

In the first inning, Swenson made a full-extension catch in the right-center field gap diving toward the warning track and snagging a ball to rob Jeremy Martinez from extra bases and a likely RBI since Bobby Stahel was standing on second base when the play was made and had to retreat to first base.

Swenson later stole a pair of potential runs from the Trojans in the fifth inning when the red-hot Stahel sent a two-out drive deep to right field. There were a pair of runners on base, including the speedy Reggie Southall. With two outs, both were off to the races with the ping of the bat and were going to come around to score if Swenson hadn’t made a running grab on the warning track before hitting the wall and bouncing off.

“It’s always sweeter when they save runs,” Swenson said of making a web gem. “I owe that second one to my center fielder, Andrew Calica. He was telling me the whole way how much room I had and that I could keep going. I knew that I wasn’t going to run into the wall because I could hear him talking to me.”

The Gauchos carried the momentum from that catch into their next at-bat. Cameron Newell singled to open the frame and moved up on a passed ball. With two outs, that proved crucial because Peter Maris singled to center field and Newell slid in with the first run of the game when Timmy Robinson’s throw was up the line. Maris also took second on the throw, which enabled him to score when pinch hitter Kyle Plantier singled up the middle to put UCSB up 2-0.

With Mazza on the mound, that’s all the Gauchos really needed. He allowed just four hits and a walk in seven innings, striking out five batters before turning the ball over to the bullpen.

Alex Garcia flashed a 94-95 mph fastball in the eighth inning, but USC was able to make it a one-run game thanks to a pair of wild pitches from the 6’3″ freshman. Stahel led off with a single and moved up on a wild pitch and a groundout before scoring on another wild pitch. In the ninth inning, USC got a baserunner, but never truly threatened against closer Robby Nesovic, who picked up his third save of the season.

Mazza improved to 4-0 on the season while Bernardo Flores, who allowed an earned run in 3.2 innings, took his first loss of the season. USC now prepares for a top 10 showdown with crosstown rival UCLA while Santa Barbara will return to the greater Los Angeles area this weekend to take on Cal State Northridge.

One positive for the Trojans is that after losing their first game of the season the first time they met the Gauchos this year, they went 3-0 that weekend in the Dodger Stadium College Baseball Classic, beating then-No. 1 Vanderbilt, then-No. 4 UCLA and then-No. 6 TCU.

Here are some pictures from No. 11 UC Santa Barbara’s 2-1 win at No. 8 USC, including all three runs scored:

IN THEIR OWN WORDS

UC Santa Barbara head coach Andrew Checketts talks about the Gauchos’ big midweek 2-1 win over No. 8 USC and the pitching performance of Domenic Mazza shutting down a strong offensive club. Checketts also talks about the defensive prowess of Luke Swenson and what the former walk-on has meant for the club:

USC head coach Dan Hubbs talks about the Trojans’ inability to get the big hit that UC Santa Barbara was able to get in a two-run sixth inning and the impressive work of Domenic Mazza shutting down USC’s offense:

UC Santa Barbara OF Luke Swenson missed all of last season after tearing his ACL and having to have knee surgery, but he’s back and tearing things up for the Gauchos this year. He talks about being back on the field and his pair of web gems in right field that saved UCSB in a 2-1 win against No. 8 USC: