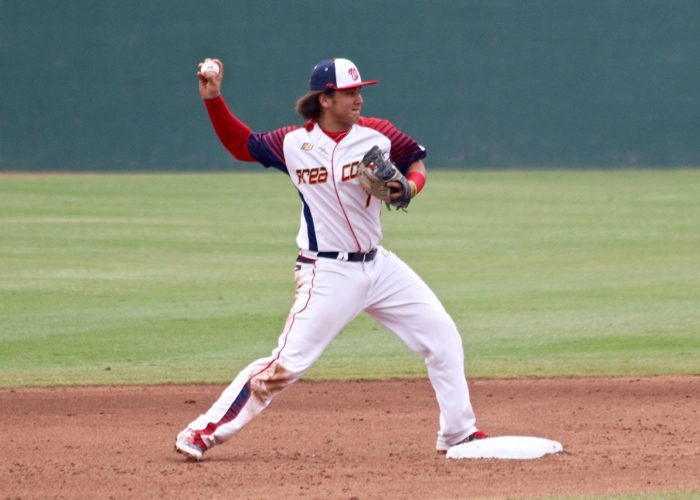 LONG BEACH, Calif. — The average baseball fan may one day know several of this year’s Area Code Baseball Games players by name, but for now it would be rare that any name would register. Well, that is except for one name.

Dante Bichette hit 274 home runs in the big leagues and was second in MVP voting in 1995, when the four-time all-star knocked 40 home runs and drove in 128 runs while hitting .340. His son, Dante Jr., was selected No. 51 overall in the 2011 draft. He is currently in the Yankees organization playing with Double-A Trenton.

Then there is current 2016 prospect Bo Bichette — the one name so distinctive and well-known because of Dante’s career that the casual fan in Long Beach this week might know him. Even if you didn’t know baseball, but have been watching the Nationals (Southeast) team, you would know the name Bo Bichette by this point.

Bichette has been hitting screamers all over the yard all week. In the Nationals’ first game on Friday, Bichette had a pair of hits, with a single to his pull side and a loud triple to the right-center field gap. The ball rocketed off his bat at 108.3 mph — the second highest exit speed we’ve seen this week. He hustled around for an RBI triple on the play. In his next at-bat, Bichette continued his loud contact with a 102.7 mph liner to right field that was caught on the run by the Brewers outfielder.