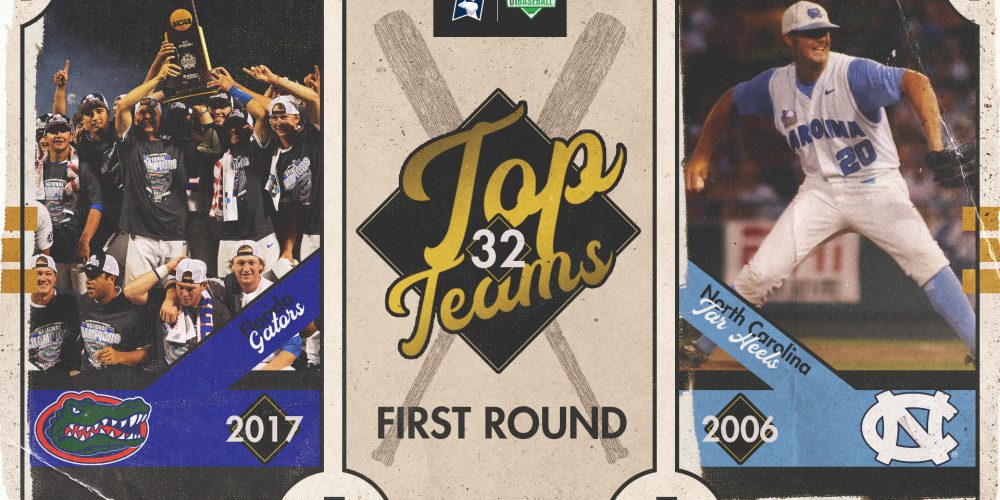 Today would have been the day four of the 2020 College World Series. Since we don’t have live baseball to watch, we’re taking a look back at the greatest CWS teams of the modern 64-team NCAA tournament era. In conjunction with NCAA.com, we’ve made our picks for the 32 best Omaha teams since 1999 and seeded them into a bracket.

The Gators made seven trips to Omaha in the 2010s under Kevin O’Sullivan, and they were regularly among the most talented teams in college baseball. But the 2017 Florida team finally broke through and won the first national title in program history, making it the greatest group of Gators ever. After going 21-9 in the SEC to win the Eastern Division by two games and take the top seed in the SEC tournament, Florida landed the No. 3 national seed in the NCAA tournament. UF won its first two regional games before getting upset by Bethune-Cookman, but it bounced back to win the rematch. Then Florida won a compelling super regional matchup against Wake Forest in three games to reach Omaha, where it rode dominant pitching to the title. The Gators led the CWS field with a 2.33 staff ERA in Omaha, and its pitchers struck out 68 in 54 innings. Florida jumped out to a 2-0 record in bracket play with wins over national seeds TCU and Louisville, but the Frogs pushed the Gators to an if-necessary game in the bracket finals. CWS Most Outstanding Player Alex Faedo came up big in that game, working 7.1 shutout innings to lead Florida to a 3-0 victory and a trip to the Finals.

Florida matched up with fellow SEC powerhouse LSU in the Finals, and its pitching continued to shine. First-rounder Brady Singer threw seven strong innings in a 4-3 win in Game One, and then Tyler Dyson worked six strong innings in a 6-1 win in Game Two, completing the sweep. Faedo (2-0, 0.00 in 14 IP in Omaha), Singer (2-0, 2.57) and Jackson Kowar (who came out of the bullpen to finish the CWS clincher) were all first-round picks on the mound for this Florida team, while third baseman Jonathan India would join Faedo as a first-rounder in 2018. Florida also had one of the best closers of the era in Michael Byrne, a two-time first-team All-American who worked seven scoreless innings over four appearances in Omaha. Overpowering pitching was this team’s calling card, making up for the fact that this was one of the least imposing Florida offenses of the decade (it ranked 224th in the nation in batting and 180th in scoring).

North Carolina has been to Omaha seven times since 2006, and it isn’t easy to rank its best teams in that span. You can make a compelling case for the 2007 team that fell in the CWS Finals, or the 2013 team that earned the No. 1 national seed and reached the national semifinals — and it was hard to leave both of those teams out of our field of 32. But we’re giving the nod to UNC’s first Omaha team of the era, the 2006 squad that came within a whisker of winning the national title. These Tar Heels went 22-8 in conference play to win their division and earn the No. 2 seed in the ACC tournament, where an 0-2 showing likely prevented them from landing a top-eight national seed. UNC’s bats caught fire in the Chapel Hill Regional, scoring 43 runs in a 3-0 waltz through the weekend. Then the Heels went to Tuscaloosa and took down national seed Alabama, advancing to Omaha on Chad Flack’s walk-off two-run homer in the bottom of the ninth, turning a 7-6 deficit into an 8-7 win.

The Heels kept rolling at Rosenblatt, taking down national powers Cal State Fullerton, Clemson and Fullerton again to reach the CWS Finals against Oregon State. UNC won the Finals opener but lost Game Two, setting up one of the most dramatic winner-take-all showdowns of the modern era. First-round pick and future big leaguer Daniel Bard earned the start in that game and cruised into the eighth inning, with the score tied 2-2. But Oregon State mounted a two-out rally that was capped by an unearned run on an error, lifting the Beavers to a 3-2 victory.

Despite the heart-breaking loss, the 2006 UNC team holds up as one of the era’s most talented, led by UNC’s all-time wins leader Robert Woodard and future major leaguers Bard, Andrew Miller, Andrew Carignan, Adam Warren, Luke Putkonen and Rob Wooten on the mound, plus Tim Federowicz behind the plate. The lineup was deep and powerful, led by Flack, Federowicz, Josh Horton, Reid Fronk, Jay Cox and Benji Johnson.

How They Match Up: North Carolina is clearly the underdog on paper against a Florida team that finished the job of winning a title, and had four first-round picks on the roster. But UNC was actually the more balanced team thanks to its far superior offense, which ranked 22nd nationally in batting and 33rd in scoring (while Florida was 224th in batting and 180th in scoring). UNC even ranked better in staff ERA (No. 9, while Florida was No. 17). But the Gators were an elite defensive squad, ranking eighth in fielding percentage — and defense proved to be UNC’s fatal flaw when it mattered most.

The @DiamondHeels are clearly the underdog on paper against a @GatorsBB team that finished the job of winning a title, and had four first-round picks on the roster. If these two teams played, who wins?