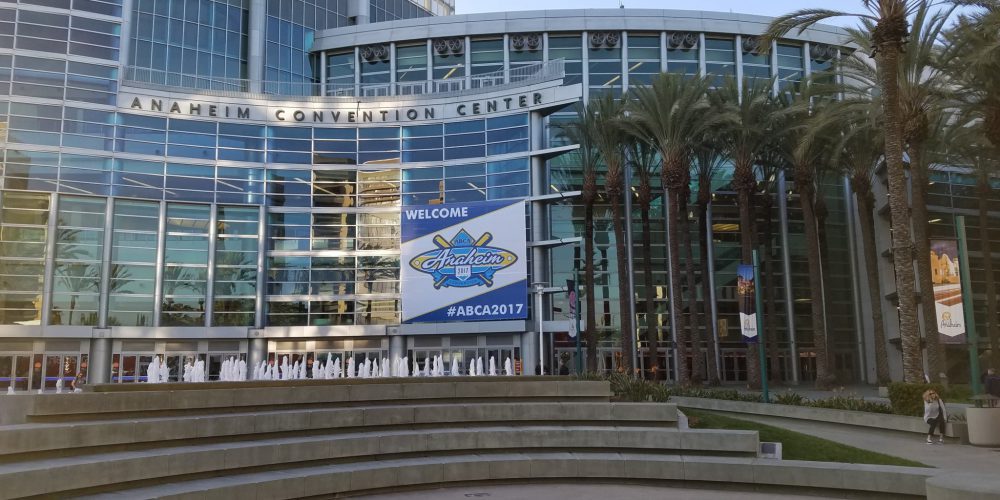 ANAHEIM, Calif. — One of the highlights of the annual American Baseball Coaches Association convention is Thursday night’s Division I business meeting, when college baseball’s leaders get together with all D-I coaches present to discuss pending NCAA legislation and goals for future legislation as well as other ideas to help grow the game.

Here’s a look at some of the major issues that were discussed at the 2017 convention in Anaheim:

There are two key pieces of legislation currently in the pipeline that will go up for a vote at the NCAA’s Division I Board of Directors meeting in April. These proposals affect how college teams can apportion their 11.7 scholarships. Currently, teams can distribute athletic aid to a maximum of 27 players (called “counters”) on their 35-man roster, and every player who receives athletic aid must receive a minimum 25 percent scholarship. The two proposals on the table are to remove those restrictions, giving coaches more freedom with the way they distribute aid.

Many coaches believe the current rules are too restrictive. It’s difficult enough to construct a 35-man roster with just 11.7 scholarships; a lot of coaches want the ability to distribute their modest resources however they see fit. An ABCA survey revealed that 65.4 percent of coaches want to get rid of the 25 percent rule, compared with 34.6 percent who want to keep it. That 20-point gap is pretty substantial. A smaller majority also wants to get rid of the 27-man counter rule: 59 percent to 41 percent.

Some coaches we spoke with liked UMass-Lowell’s Ken Harring’s suggestion: eliminate the 25 percent rule, but also bring back the one-time transfer exemption. Originally, the 25 percent rule and 27-man counter rule were put into place to force schools to make a more significant commitment to players, in exchange for players giving up their right to transfer freely. Forcing players to sit out a year when they transfer has dramatically cut down on transfers between four-year schools, which has helped boost baseball’s Academic Progress Rate — and that was the top priority of the entire legislative package. That no-transfer rule has been in place since 2008, and don’t expect it to go away anytime soon — after all, that’s the single biggest reason that baseball’s APR is no longer in trouble.

Is it fair to players to take away the 25 percent rule without allowing them to transfer freely? That’s the question that the Board of Directors will have to answer in April. If a player is on a “books scholarship,” for instance, should he be allowed to transfer to a school that will give him 50 percent?

It’s clear that most coaches want to get rid of the 25 percent rule, but the will of the coaches doesn’t always translate into votes from their schools’ administrators. University presidents and athletics directors have their own agendas and their own understanding (or lack of understanding) of the unique set of issues facing baseball. ABCA executive director Craig Keilitz repeatedly emphasized in his address to coaches that if they feel strongly about the proposals on the table, they must sit down with their ADs and explain why these issues are important. 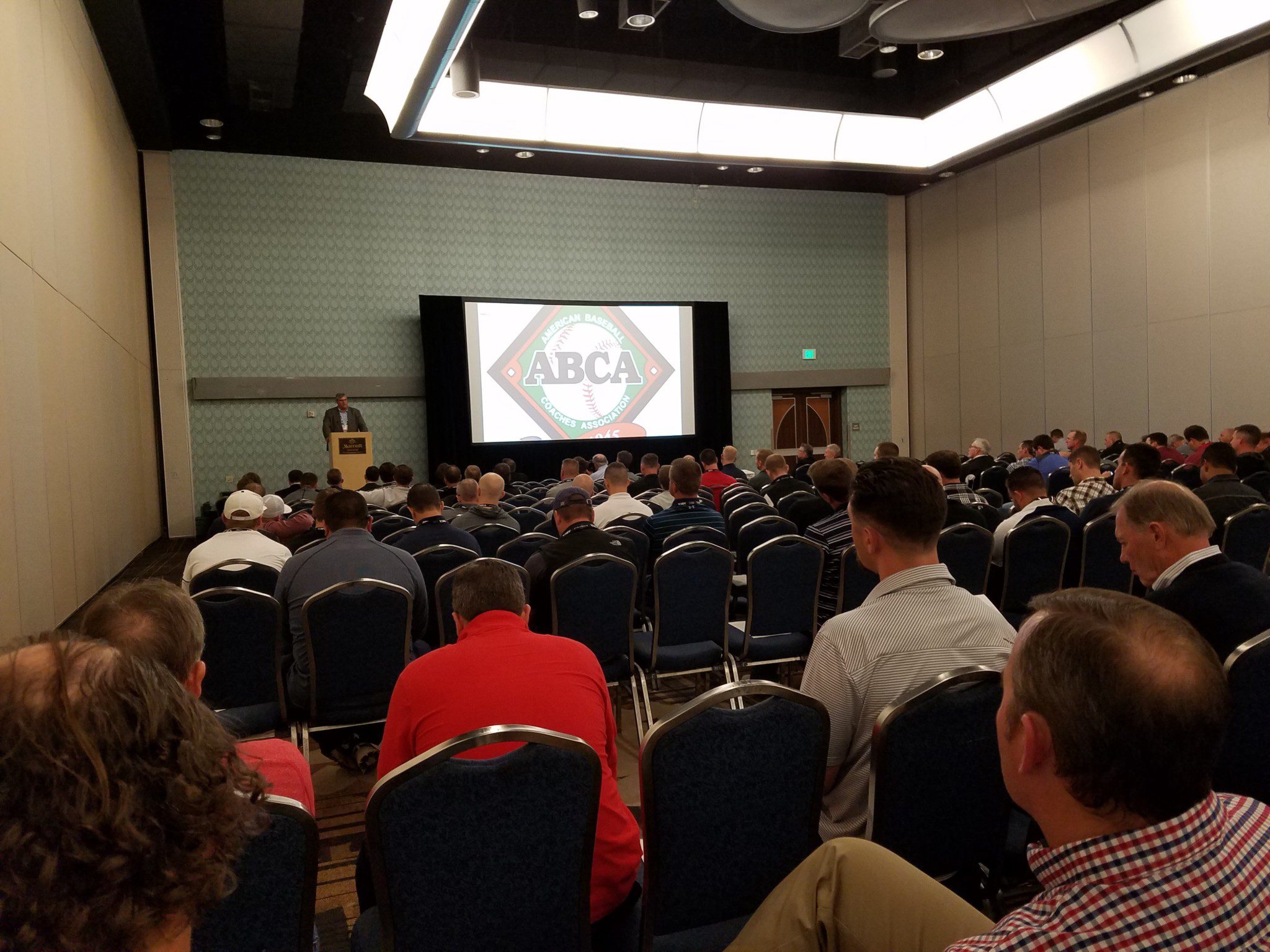 The ABCA’s Division I business meeting

So it’s difficult to say whether the 25 percent rule will be repealed, the 27-man counter rule will be repealed, both or neither. Some coaches are concerned that getting rid of the 27-man counter rule will hurt parity and help the big powers, but it’s important to note that the 35-man roster cap isn’t going anywhere. The 35-man cap is probably the single biggest reason for the increased parity in college baseball over the last decade; big schools can’t carry 25 walk-ons anymore. They are limited to 35-man rosters, and so the 20 or 25 players who might have been content to walk on at LSU or Mississippi State or Arizona State are now going to smaller schools instead. That won’t change if the 27-man counter rule is repealed.

The difference is that right now, the last eight players on every team’s 35-man roster are walk-ons (though they are allowed to receive academic or institutional aid, which is a big advantage to programs like Vanderbilt, Rice and Virginia that have a lot of financial aid to give). Some smaller schools are concerned that if the 27-man counter rule is abolished, more players will choose to accept smaller scholarships at big schools instead of bigger scholarships at smaller schools.

As the 59-41 survey split shows, coaches are still pretty divided on the 27-man rule, and the lack of overwhelming support for the measure from coaches might hurt it with the Board of Directors. We’ll find out in April.

Keilitz said there are two proposals the ABCA is working to get into the legislative cycle that starts in September, to be voted upon in 2018:

1. The addition of four fall exhibition games that won’t count against a team’s 56-game limit. Currently, college baseball teams are allowed to play up to four fall scrimmages against other teams, but each fall game they play reduces the number of games they can play in the spring — so if you choose to play four fall games, you can only play 52 in the spring. Keilitz said 88 percent of Division I coaches support this proposal, and he pointed out that softball teams, which also play 56 games in the spring, are permitted to play eight games against outside competition in the fall, and none of them count against a team’s 56-game spring limit.

“We should re-write the legislation to say we want half what softball has,” Keilitz quipped. “With that said, it’s just one of those things. The NCAA started to eliminate some of that (disparity with softball), but my point is until you eliminate it, give baseball our due on that, let the student-athletes compete more. I’d be disappointed if we can’t get that through in the next few years.”

2. Allowing college baseball programs to hire a fourth full-time coach. This proposal is overwhelmingly popular with the ABCA membership (86 percent support it), but Keilitz indicated it looks like a real long shot. Currently, baseball is allowed one head coach and two-full-time assistants for a 35-man roster, and Keilitz pointed out that the ratio of one coach to nearly 12 players is the worst ratio in college sports. But he said athletic directors just aren’t looking to add new positions to their payroll right now.

“People really aren’t coming forward to spend more money,” Keilitz said. “However with that said, there’s a need, it should be filled. We don’t have an entry-level position. You need to be fairly well off to be a volunteer coach, because how many people can move to a city, work 80 hours a week to be a volunteer for three years? So those are issues we’re looking at, it’s important to our coaches, it’s certainly important to our student-athletes, so we’re going to work to get those things done.”

The ABCA has convened a new Pace of Play Committee to study ways for college baseball to boost its appeal to fans by improving the speed of the game. Vanderbilt coach Tim Corbin is serving as the chairman of the seven-coach committee.

The most innovative idea being discussed by the group is the installation of a speaker system inside the helmet of the catcher to allow coaches to call pitches without the catcher having to look over to the dugout for signs. Football coaches use headsets to communicate with quarterbacks, and it stands to reason that the same technology could significant help speed up the pace in baseball.

“Whenever you throw things out there new to the game, people say, ‘What are you talking about?’ But there’s roughly 300 pitches in a game. And if you save 10 seconds off each pitch, you’re talking about 50 minutes. But realistically, you could save five seconds off every pitch, you’re talking about 25 minutes with no change in the game,” Keilitz said. “I know it’s unique, but I’m currently working with some technology companies to figure out how we could get it done, is it feasible, and then finding a couple of conferences that could do it, if it is a pilot-type program throughout the year. We’d need 100 percent buy-in with the coaches saying this is something we want to do, and we’re going to do it for a year and see what happens. With that said, we’ve got a long ways to go.”

Georgia pitching coach Fred Corral said he has communicated with his catchers using a bluetooth headset during fall ball at Georgia and Memphis, and it has led to a “night and day difference.” Corral said he particularly likes the headset approach because it makes it easier to teach the game by providing instant feedback after each pitch. He said the Bulldogs did it for less than $100 using a bluetooth headset and a phone. Here’s a video that shows how the Georgia system worked.

Corral explained his system in a Twitter conversation, which led to a prolonged discussion on my Twitter feed about the merits of having coaches call pitches at all. Many critics of college baseball — scouts in particular — believe that coaches over-manage the game and would like to see more schools teach their catchers how to call their own game. Of course, it’s easy to do that in the minor leagues, where winning and losing doesn’t really matter. The stakes are higher in college baseball, where coaches’ livelihoods depend upon winning games. Many pitching coaches spend countless hours breaking down film to try to come up with the best game plan against opposing pitchers, and most college catchers don’t have the time to do that (they are still student-athletes, after all). They’re also 18-to-21-year-olds who are still learning the game; it’s a lot to ask a college coach to stake his livelihood on the pitch-calling acumen and judgment of a developing 19-year-old.

I admire the programs that let catchers call their own games, but those programs are few and far between, and the reality is most coaches are not going to give up calling pitches from the dugout anytime soon. So that means the headset idea might be the best way to shave significant time off the length of the game. Corbin indicated the SEC, with its abundant resources, might be a perfect conference to serve as guinea pig for a pilot program.

Some other points that Corbin called “problematic” when it comes to pace of play:

• Transition time of new pitchers coming into the game.

• Keeping hitters in the batter’s box.

The committee will look for ways to tighten up those aspects of the game as well.

• Louisville coach Dan McDonnell, who had served as the ABCA’s Division I chair, has been appointed 4th Vice President of the ABCA, putting him on the road to becoming the ABCA’s overall president. TCU coach Jim Schlossnagle was elected to replace McDonnell as the Division I chair.

One seat is still TBD. Sidwell will serve as the new chairman of the committee.

• One minor but still noteworthy change: regional hosts will no longer have to use the visiting dugouts for NCAA tournament games when they are designated as the visiting team.

• Online streaming continues to help college baseball expand its reach. This was the most viewed CWS on WatchESPN, with a total of 71.3 million live minutes viewed. Game Three of the Finals was the most viewed college baseball game ever on WatchESPN, with 294,000 live unique viewers, 17.2 million live minutes viewed, and an average time spent per viewer of 59 minutes. During the 2016 regular season, 217 Division I teams (72 percent) appeared on an ESPN platform at some point.