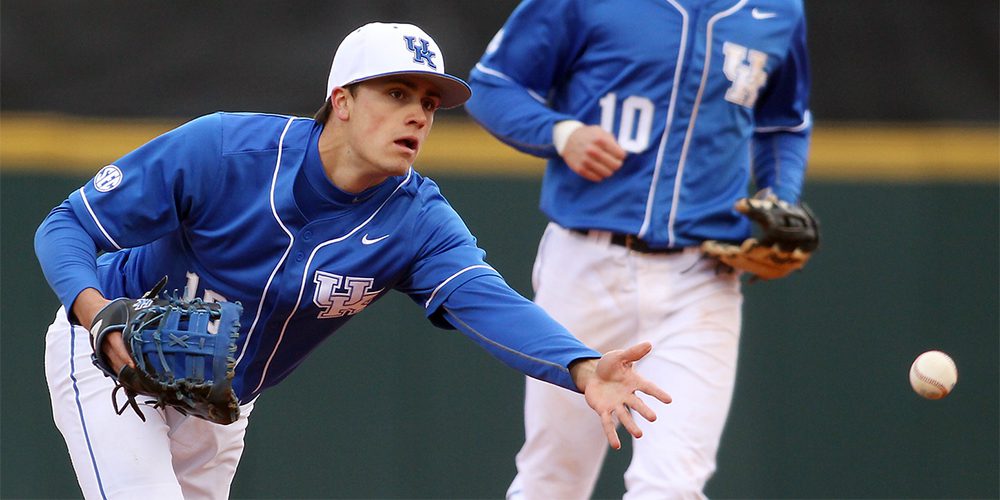 Most Exciting Player: Matt Lloyd, Indiana
Lloyd is one of the best two-way threats in the country, leading the Hoosiers at the dish by posting .317-11-46 numbers and also going 3-1, 2.51 with nine saves from out of the ‘pen. Need a run scored? Need a rally stopped? Lloyd is the Swiss Army Knife for the Hoosiers

Best Hitter: Tristan Pompey, Kentucky
Pompey leads the Bat Cats with a .369 average and nine home runs. He also has a staggering 41 walks on the season. But perhaps his most impressive stat is his hitting .410-9-27 in 30 SEC games this season. That’s a whale of a campaign there.

Best Defender: Evan White, Kentucky
Yes, a first baseman gets the best glove award of this regional. Coach Nick Mingione calls him “the best first baseman in the country” as White has earned All-SEC Defensive Team honors twice in his career. This spring he has not committed a single error all year. Yep, none. White also hit a stout .366 with eight dingers and 38 RBIs.

Best Pitcher: Sean Hjelle, Kentucky
Facing off with the 6-foot-11 Wildcat righty, whose name is pronounced “Jelly”, can turn any batter’s knees to jelly. An intimidating force off the rubber, Hjelle can run it up to the mid-90s. His numbers might actually indicate he hasn’t reached his potential this season, going 9-3, 3.87 with 91 Ks, but also 28 walks and 12 plunkings. But when he’s on, it can be a thing of beauty.

X Factor: The Cliff
This is just the second time in program history that Cliff Hagan Stadium will host in the postseason. With its close confines this place has a reputation for being a launching pad. If the winds are favorable, look for a lot of offense this weekend. Advantage: Wildcats (but keep an eye on NC State’s powerful offense too).

Best Starting Rotation: Kentucky
Though they can show some dents in the armor, the Wildcat rotation of Hjelle-Lewis-Logue has the most potential for domination. Freshman Zach Thompson has been a revelation for the Cats as well, going 7-2, 3.34 with 83Ks in just 64 innings this season. He could be used this weekend if it goes to an “if necessary” game.

Best Bullpen: Kentucky
None of the bullpens in this regional will wow you with eye-popping numbers. Logan Salow is pretty stout, with a 1.72 ERA and 64 strikeouts in 47 innings, but he also has just a 2-6 record. Go figure. Chris Machamer, Brad Schaenzer and Colton Cleary add solid depth to the corps, but none are shutdown arms.

Best Offensive Team: Kentucky
This is a no-brainer, for sure. The Bat Cats pillage and plunder at a .317 pace and have also blasted 66 home runs and 138 doubles. The rest of the regional field hits .277 or below. Six of the regulars in the Big Blue lineup hit .310 or better. This is as balanced and as intimidating as any one-through-nine in the country.

Best Defensive Team: Ohio
The Bobcats have the best defensive numbers in the regional, sweeping at an impressive .980 percentage this season. Three-fourths of the infield is made up of seniors, led by the double-play combo of SS Tyler Finkler and 2B Ty Black, who are as smooth as Kentucky sour mash, committing just 16 errors between them. This is a defense that can keep OU in any game.

Kentucky’s Win Probability (1-to-10): 7
The Wildcats can be a little too on the wild side from time to time, suffering curious losses like losing a home series to Georgia, yet they can also pull off a sweep at Texas A&M. So you never know what you’re going to get. And the one thing that keeps me hesitant on calling this one a cakewalk for the Cats is the performance of the SEC in the Big Dance a year ago. Who knows if that upset bug is going to rear its ugly head after all here in Lexington? Don’t count it out.

How about THIS for a first season as head coach? Nick Mingione is a hot property now. His heat level goes to 11 and he’s used all 11 decibels to get the most out of his team this season.