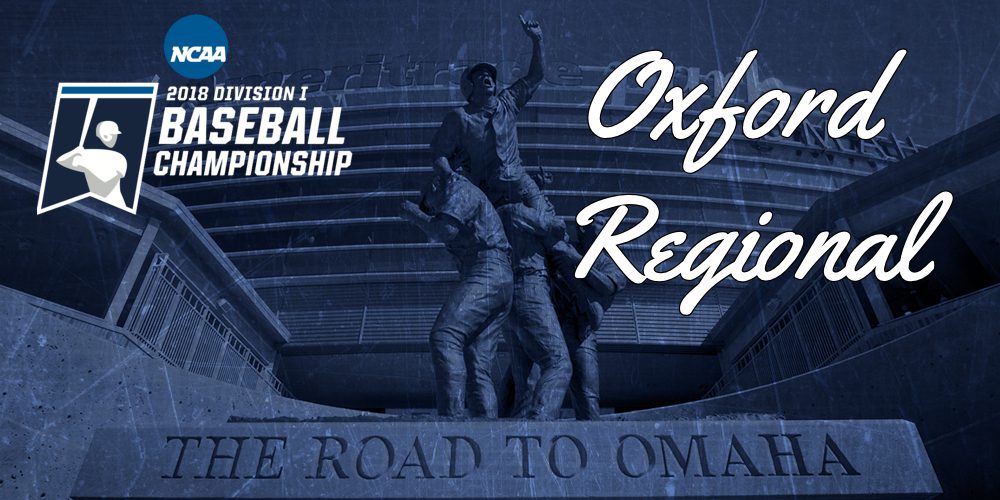 Most Exciting Player: Jeremy Eierman, SS, Missouri State. Though he hasn’t been able to duplicate his 23-homer, 1.106 OPS sophomore campaign, Eierman is still the most talented position player in this regional, a playmaker at short and a bona fide power/speed threat with 10 homers and 20 stolen bases in 23 tries.

Best Hitter: Kevin Strohschein, DH, Tennessee Tech. Despite playing through an elbow injury that has relegated him to DH duties, Strohschein has put up absurd offensive numbers (.406/.463/.713, 18 HR, 17 2B) as the centerpiece of college baseball’s most explosive lineup. Coach Matt Bragga refers to him as “a freak of nature” with tremendous bat speed and prodigious power.

Best Defensive Player: Grae Kessinger, SS, Ole Miss. It’s a close call between Kessinger and Eierman, who have identical fielding percentages. Take your pick… We’ll lean ever so slightly toward Kessinger, a fluid, natural shortstop with range and arm strength.

Best Pitcher: Miller Hogan, RHP Saint Louis. A three-year member of SLU’s weekend rotation with a 2.60 career ERA, Hogan is having his best year as a junior, going 10-3, 2.19 with a dazzling 129-12 K-BB mark in 102.2 innings. His diverse arsenal includes a low-90s four-seamer that bumps 94, a sinker, slider, splitter and a curveball.

X-Factor: Ole Miss injuries. Kessinger tweaked a hamstring in the SEC tournament, and standout freshman third baseman Tyler Keenan missed the last four games with a wrist injury. Both were considered day to day heading into this weekend, and if they’re operating at less than 100 percent it could impact this regional in a significant way.

Best Starting Rotation: Saint Louis. Certainly Ole Miss can make an argument that it has the most talented trio in Ryan Rolison, Brady Feigl and James McArthur — their numbers aren’t as good as SLU’s but obviously pitching in the SEC is a lot more rigorous than the Atlantic 10. But Hogan, Jackson Wark (9-2, 3.40) and Drew Reveno (10-2, 1.84) all have good stuff too, with fastballs that reach the low 90s, and they have been much more consistent than the Ole Miss starters.

Best Bullpen: Ole Miss. We expected the Rebels to have the best bullpen in college baseball, and that hasn’t materialized, as former closer Dallas Woolfolk struggled for much of the year and then stepped away from the team for health reasons in May, and fellow mainstay Will Stokes has unexpectedly struggled as well, posting a 6.25 ERA. Still, the Rebels are plenty deep in the pen, and they have one of the nation’s best shutdown closers in breakout star Parker Caracci (1.85 ERA, 10 saves, 68-10 K-BB in 43.2 IP).

Best Defensive Team: Ole Miss. The Rebels have the highest fielding percentage in this quartet (.977, 37th in the nation), just a tick above Missouri State. The Rebels have good playmakers up the middle with Kessinger at short, Will Golsan in center and Nick Fortes behind the plate.

No. 1 Seed Win Probability (1-10): 5. The committee did Ole Miss no favors by giving the No. 4 national seed a date with Miller Hogan and the Billikens in the opener, along with a very dangerous No. 3 seed in Missouri State, which won a regional just last year. Tennessee Tech was also in a regional last year and has a chance to bash its way through this regional. This is one of the most loaded regionals in the tournament — so Ole Miss is a clear favorite at home, where it is 28-4 this season, but don’t expect the Rebs to breeze through this thing without a fight. This is one of the few regionals were all four teams have a legitimate chance to advance.