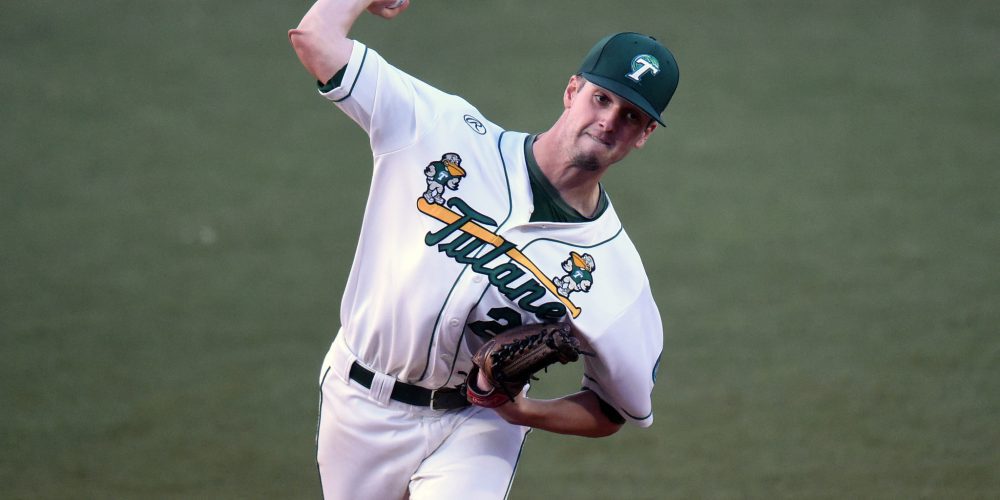 Team of the day: Tulane

The Green Wave took a step forward last season by reaching the NCAA postseason. Now, it looks like this team will have much higher aspirations come that same time this season. Tulane senior righthander Emerson Gibbs struck out five and walked just one in a complete game shutout, 3-0 win over East Carolina. Meanwhile, shortstop Stephen Alemais hit a home run and Hunter Williams had another productive night with a pair of hits. With the series win, Tulane is the team to beat in the American with a pair of conference series wins, along with a 21-9 overall record.

The Owls were on the wrong side of the ledger to start the weekend against Charlotte. However, they bounced back in impressive fashion Saturday afternoon with a dominant 17-8 win over the 49ers. And, boy, how about the ultra-talented and rising shortstop? Chatham had five hits, one a home run, along with three runs scored and seven RBIs. For the year, Chatham is now hitting .403 with three homers and 28 RBIs.

Upset of the day: UAB over Rice

Wayne Graham’s Owls have been sizzling hot the past couple of weeks, but the Blazers finally put some water on the fire with a 6-2 road win on Saturday. UAB starting pitcher Ryan Ruggles allowed just two runs in 5.2 innings of work, while Thomas Lowery was terrific out of the bullpen with 3.1 shutout innings of work. UAB’s offense touched up Rice lefthander Blake Fox for five runs on seven hits in seven innings, with leadoff hitter Brewer Hicklen leading the way with a four-hit performance.

RED RAIDERS RAGE … AGAIN: What is with Texas Tech these days? Tim Tadlock’s club just continues to impress, clinching a huge road series victory over Oklahoma State with an 8-2 triumph. Tech’s Cory Raley had a double, four hits and four RBIs to lead the charge, while Tyler Neslony smacked a pair of doubles. Meanwhile, Steven Gingery allowed just a run in four innings, while Robert Dugger and Hayden Howard also were strong out of the pen. Now, Texas Tech is 23-9, 10-1 in the Big 12, and likely will skyrocket up our rankings. Furthermore, Tech continues to see its RPI climb and now is a favorite to earn a regional host.

MORGAN’S MOW JOB: Gonzaga captured a 3-0 win over Portland on Saturday and sophomore righthander Eli Morgan was terrific, striking out 11, walking one and allowing four hits in a complete game performance. Gonzaga is 19-10 overall, 8-3 in the WCC and continues to be in the hunt for an at-large bid heading into the second half of the season.

VICTORY FOR VAUGHN: Belmont made easy work of SIU-Edwardsville on Saturday with a 12-0 triumph. And while the offense certainly took care of business, the most impressive performance was from starting pitcher Tyler Vaughn, who struck out eight, walked one and allowed six hits in a complete game performance.

THE REAL DEVITO: New Mexico took charge of the Mountain West regular season title race on Saturday with a 14-13 win over Fresno State to clinch an important series win. UNM’s Chris DeVito had a ridiculous day at the plate, going 5-for-7 with a trio of homers and six RBIs, while third baseman Carl Stajduhar had six hits and three RBIs. With the win, UNM improves to 22-9 overall, along with an RPI nearing the 30s. Coach Ray Birmingham is one of the best in the business, and he again has the Lobos in good shape.

KEAFFABER WITH A K: Indiana State hit the road and captured a 3-0 win over Southern Illinois, and it was talented junior lefthander Ryan Keaffaber who led the charge, striking out four, walking one and allowing three hits in a complete game performance. He also threw 107 pitches, 75 of those for strikes.

COMPLETE KELLER: Milwaukee took care of business at home in a 2-0 win over Wright State. Righthander Brian Keller led the charge for the Panthers, striking out nine, walking two and allowing just three hits in the complete game performance.

CHARLESTON CHARGES BACK: College of Charleston dropped the series opener to UC Santa Barbara on Friday, but bounced back in impressive fashion on Saturday with a 10-3 triumph. Charleston set the tone in the contest with a six-run fifth inning with Bradley Jones’ three-run homer leading the way. Jones finished the game with two hits, while Jake Maziar had two hits and two RBIs. Our Aaron Fitt reported on the game, and this result sets up what should be a fantastic series finale.

BULLDOGS BOUNCE BACK: Florida had its way with righthander Dakota Hudson and Mississippi State in the series opener, but how about the way the Bulldogs responded in a 10-4 Game Two triumph? MSU touched up usually reliable UF starting pitcher Alex Faedo for nine runs in just five innings, getting off to a 9-0 lead before the Gators had a chance to regroup. Cody Brown led the charge with a grand slam, while the top five hitters in the batting order totaled 12 hits. While Austin Sexton had a rather pedestrian start for the Bulldogs, sidewinder Ryan Rigby was terrific out of the pen, striking out four and allowing just a run in five innings.

HOGS NOT SO HOT: Looking to get back on track this weekend at Ole Miss, Arkansas moved hard-throwing righthander Zach Jackson to the weekend rotation. Well, it’s safe to say Jackson didn’t have a great start to his debut, allowing six runs (five earned) on eight hits in five innings in a 14-9 loss to the Rebels to lose the series. The silver lining? Jackson did settle down and put together clean innings to finish his start. With the loss, though, the Hogs are now 4-7 in the SEC, while Ole Miss picked up a much-needed conference home series win. For the Rebels, Ryan Olenek had three hits and two RBIs, while catcher Henri Lartigue had two hits and three RBIs.

KENTUCKY CRUSH: The Wildcats just continue to take care of business in the SEC, winning yet another series with a 6-2 win over Alabama. How UK won the series is the most impressive part, as Riley Mahan smacked a walk-off grand slam to beat the Crimson Tide and take the series. Meanwhile, UK starting pitcher Dustin Beggs put together yet another quality start, striking out 10, walking one and allowing just a run on four hits in seven innings. With the win, UK is 22-8 overall, 8-2 in the SEC and has an RPI of 19.

AGGIES ACT: Much was said about Texas A&M after its tough weekend in Gainesville last week, but it has responded this weekend in impressive fashion, clinching a series win over Georgia with a 15-1 triumph on Saturday. The Aggies actually hit back-to-back-to-back in the contest, with Hunter Melton finished the day with four RBIs, while Boomer White knocked in three runs to help lead the charge. On the mound, righthander Jace Vines struck out seven, walked one and allowed a run on eight hits in eight innings.

SIZZLING STANFORD: Stanford has flown a little bit under the radar so far this season despite racking up some nice wins. However, under the radar no more, as the Cardinal finished off a road series win over UCLA with an 8-2 victory on Saturday. Cardinal reliever Andrew Summerville allowed just a hit in five innings, while Matt Winaker had two hits and two RBIs and leadoff hitter Tommy Edman had three hits and three RBIs. Stanford is 7-3 in the Pac-12 and in the thick of the conference title race.

LOUISVILLE RESPONDS: The best sign of an elite team is how they respond from adversity. Well, the Cardinals dropped a tough series opener to Florida State on Friday and responded with a dominant 7-1 victory. UL lefthander Drew Harrington struck out five and allowed a run on two hits in 7.2 innings, while Danny Rosenbaum had a double and three RBIs, and Blake Tiberi finished the contest with two hits and two RBIs, with three other Cardinals collecting two hits as well.

BUKAUSKAS SHINES: Last weekend, I tweeted and wrote about how impressive the North Carolina sophomore righthander was at times. Though he had the one or two innings against Miami that kind of tainted his outing, that wasn’t the case Saturday in a win over Virginia Tech. Bukauskas was electric with his typical mid-90s velocity on his fastball, along with his 86-88 mph slider, and struck out 13, while allowing just a run on two hits in 7.1 innings. Amazingly, Bukauskas and the Tar Heels handed the Hokies their 17th-straight loss.

WOOD’S WAY: Oral Roberts swept a doubleheader from Western Illinois on Saturday, and talented righthander Nick Wood led the charge for the Golden Eagles. He threw the program’s first one-hit shutout since 2009 in a 6-0 victory. Wood struck out seven and walked just one in the complete game performance.