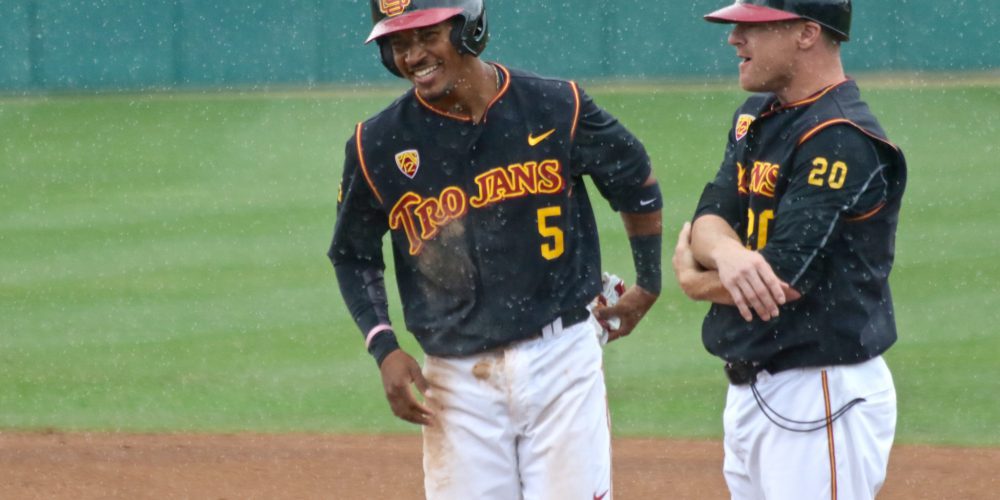 Reggie Southall had four hits as USC was all smiles even in the rain. (Shotgun Spratling)

Confident Trojans Play Up to Potential

LOS ANGELES — Confidence. Like many other mental aspects of college baseball, it can be contagious.

USC has struggled to play up to their potential at times this season, but this weekend, the Trojans (15-14, 5-3) have looked like the preseason top 15 team they were expected to be. They defeated Utah at Dedeaux Field Saturday afternoon, 6-1, to take the series behind a lights out performance from lefthander Bernardo Flores.

Flores, who has struggled with throwing strikes this season faced the minimum over six innings of relief, allowing just one hit and no walks while striking out three. Like the Trojans as a whole, he continually attacked rather than being hesitant.

The Trojans fell behind 1-0 in the first inning when DaShawn Kiersey Jr. scored on a Hunter Simmons sacrifice fly and looked like home plate would be off limits for them when Utah right fielder Josh Rose hosed a pair of USC runners trying to tag from third base in the early frames. But the Trojans stayed aggressive and broke through with a pair of runs in the fourth inning. Timmy Robinson tied the score, coming around from second base on an Angelo Armenta infield single up the middle. Armenta then came home when AJ Ramirez rocked a ball off the left field wall.

USC broke the game open in the sixth inning when Reggie Southall’s third of four hits plated a run and Corey Dempster followed two batters later with a three-run homer.

Utah (10-17, 7-4) had opportunities against USC starter Mitch Hart. However, Hart, who was on a pitch count while making his second appearance of the season, minimized the damage allowing just one run in three innings despite giving up four hits and two walks. 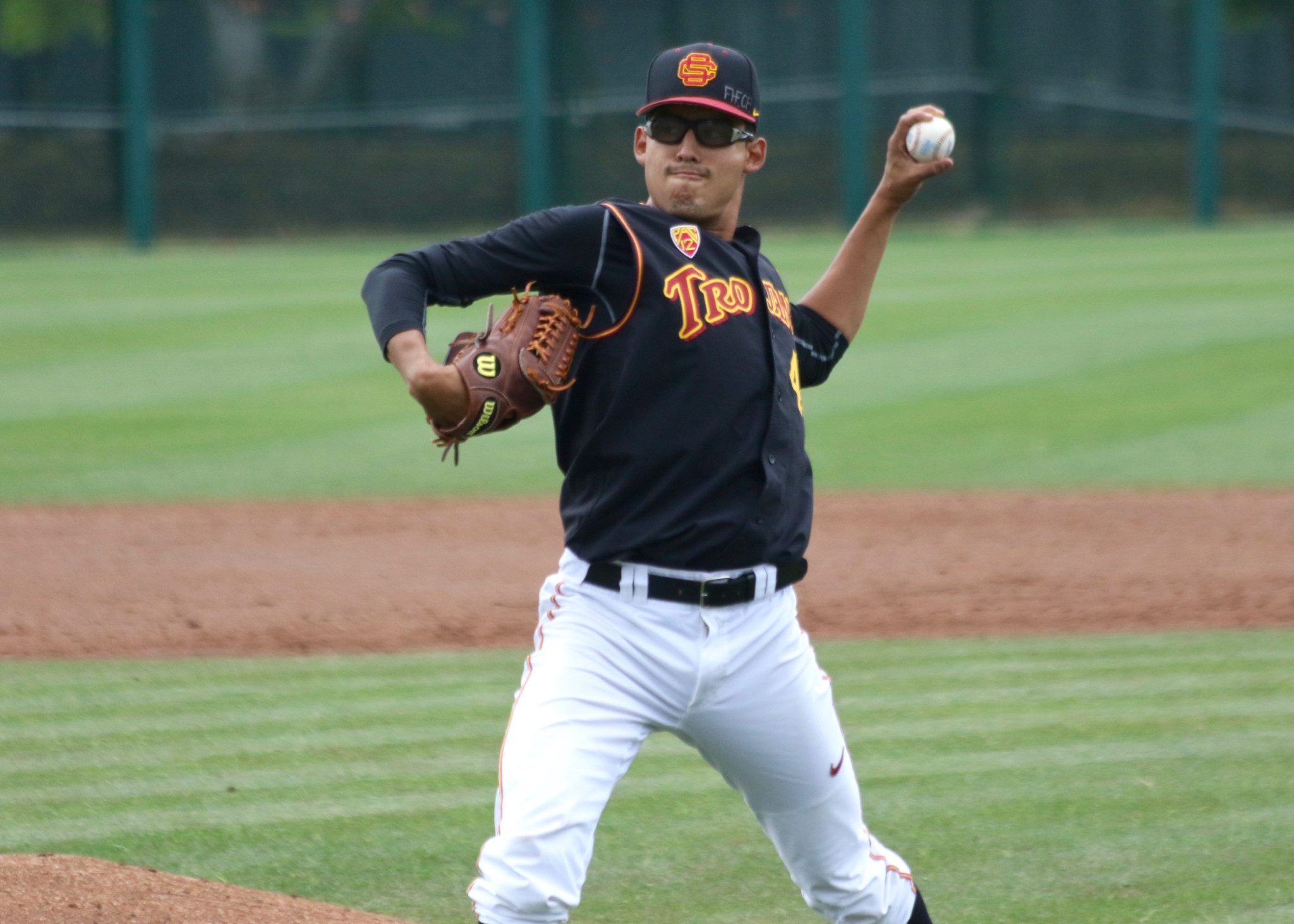 Bernardo Flores had the best outing of his USC career. (Shotgun Spratling)

Bernardo Flores pitched with confidence. The junior lefthander went after hitters and forced the issue down in the zone rather than trying to nibble on the corners. Though he has normally worked consistently at 93-94 mph and has been up to 97 in bullpen work, Flores was much more effective Saturday sitting at 89-91.

He attacked the zone and got the Utah batters to get themselves out. Flores allowed just one hit in six innings and picked off the runner immediately after. Only one other Ute reached base (via an error), but Flores faced the minimum as he induced a 6-4-3 double play on the very next pitch on a 77-mph changeup that was in the middle of the plate, but down in the zone, keeping the hitter from being able to make solid contact.

Flores entered striking out a batter per inning. He had only three strikeouts, but needed just 61 pitches to carve up the Utah lineup and pick up the win in relief. He mixed his pitches well and threw his off-speed pitches for strikes, mixing a curveball, changeup and a slider/cutter along with the fastball. Focused on throwing strikes and being aggressive in the zone, Flores used the cutter more frequently and kept Utah from barreling up many balls.

Last season, redshirt junior outfielder Bobby Stahel popped up out of nowhere to have a monster season. It was exactly what USC needed to get over the hump and end the longest postseason drought in program history. But Stahel parlayed his monster season into a 20th round selection by the Colorado Rockies.

USC has missed the presence of Stahel and Garrett Stubbs at the top of the lineup this year. Replacing them was one of their biggest question marks coming into the season. But now another junior outfielder has become a revelation at the top of the lineup for the Trojans. Like Stahel, Corey Dempster had seen some playing time early in his USC career, but hadn’t found consistent success. Dempster came into this season without a solidified position and platooned with other players early in the year, but he has now locked down one of the outfield spots and taken over the leadoff spot with his versatile attack. 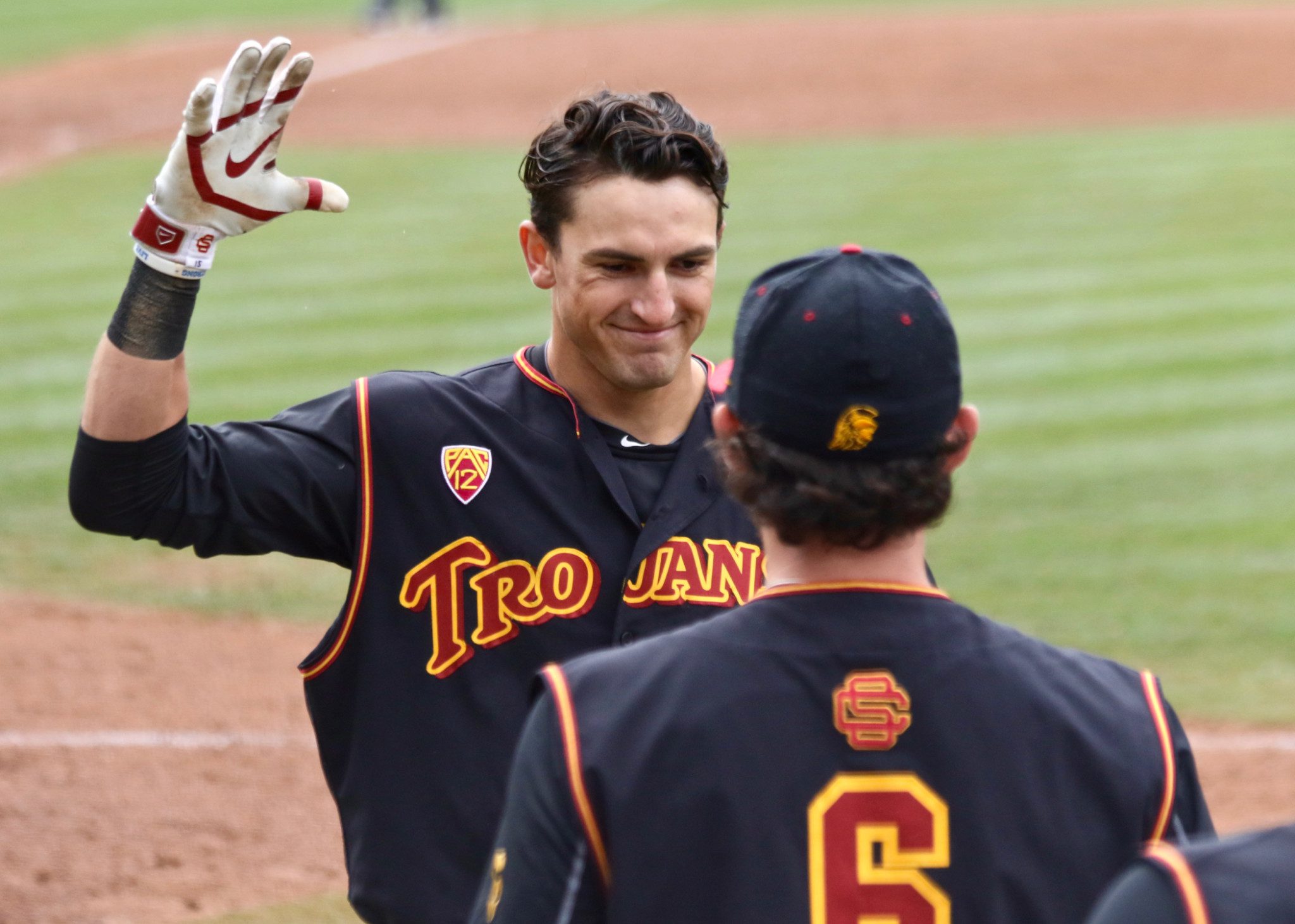 Corey Dempster is congratulated after his three-run homer. (Shotgun Spratling)

Dempster displayed a little bit of everything on Saturday. He opened the game for USC by drawing a full count walk after falling behind 1-2 in the count. Later, he singled to right-center field and stole second base. He showcased his pop in the sixth inning when he broke the game open with a three-run homer to left-center field that was a line drive that just kept going.

On the season, Dempster is batting .327/.413/.655 with eight extra-base hits, including four homers, in 55 at-bats. Despite starting less than half the games, Dempster is either first or second on the team in triples, home runs, slugging percentage and stolen bases.

USC head coach Dan Hubbs talks about the Trojans’ 6-1 win over Utah to win the series and striving to live up to the team’s potential.

Hubbs also discusses the pitching performance of Bernardo Flores and the impact of Corey Dempster in the leadoff spot:

Utah head coach Bill Kinneberg talks about the Utes’ missed opportunities early in a loss to USC and the impact of Utah’s two sets of brothers.

Kinneberg also discusses the impact of DaShawn Keirsey Jr. and Josh Rose throwing out a pair of men at the plate:

USC LHP Bernardo Flores talks about his impressive six-inning outing against Utah and how he was successful by attacking the strike zone using a cutter more often:

– Utah missed opportunities early in the game when they had USC starter Mitch Hart on the ropes. Bill Kinneberg said that’s what has been the difference this weekend versus the first three weeks of Pac-12 play. The Utes struggled early this season, but have got better pitching recently and can be a dynamic offense when DaShawn Keirsey Jr. is getting on base at the top of the lineup.

– This is beginning to look like the USC team we expected to see. The Trojans are starting to get healthy and players they expected to provide big contributions have been stepping up recently. If Bernardo Flores can build on Saturday’s performance, watch out for USC in the Pac-12.