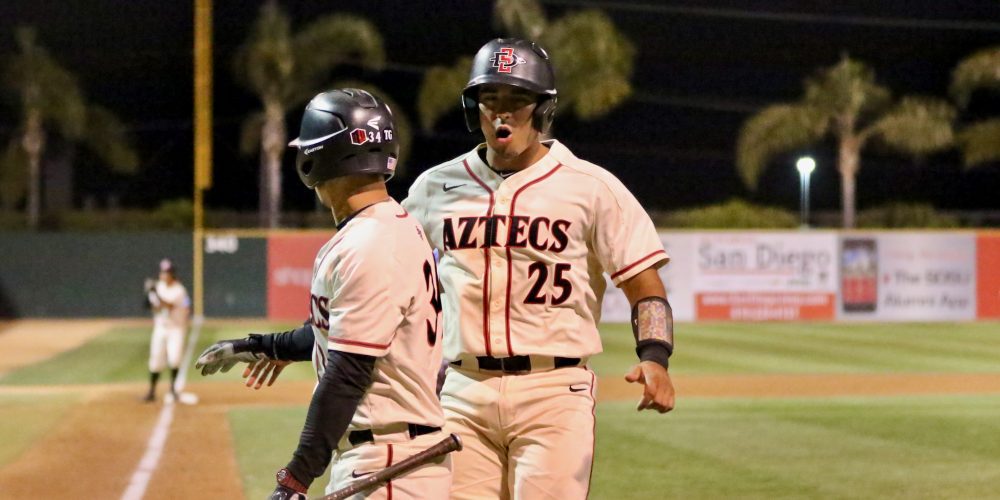 SAN DIEGO — David Hensley was pumped. His sacrifice fly to right field had tied the game and put the go-ahead run 90 feet away for the middle of the lineup.

Hensley was so excited he nearly failed to complete his offensive teammate duties. He blew past San Diego State’s three-hole hitter Chase Calabuig as he bounded toward the dugout. Calabuig screamed multiple times trying to catch Hensley’s attention before getting him to reverse course and return to the home plate area.

The 6-foot-6 shortstop came back and leaned over, craning his neck to whisper a scouting report to the 5-foot-11 Calabuig.

Before Hensley could even stride to the plate, a San Jose State coach had popped out of the dugout to make a pitching change. With the bases loaded and one out in the seventh inning, the Spartans brought in their most-relied upon reliever, righthander Fineas Del Bonta-Smith, to try to hold a 1-0 advantage.

Hensley had watched and studied Del Bonta-Smith’s warmups looking for an edge. Somewhere between those warmup pitches and his sacrificial fly ball, Hensley thought he had picked up an advantage. It’s this information that Calabuig received.

“David gave me a little insight that he was pre-gripping into his glove,” Calabuig said. “He showed four-seam fastball. I just stuck with it, sat fastball and there it was and I was able to put it up the middle.”

On the first pitch he saw, Calabuig hit a single up the middle that pushed across the winning run in San Diego State’s 2-1 win over San Jose State in the opening round of the Mountain West tournament. 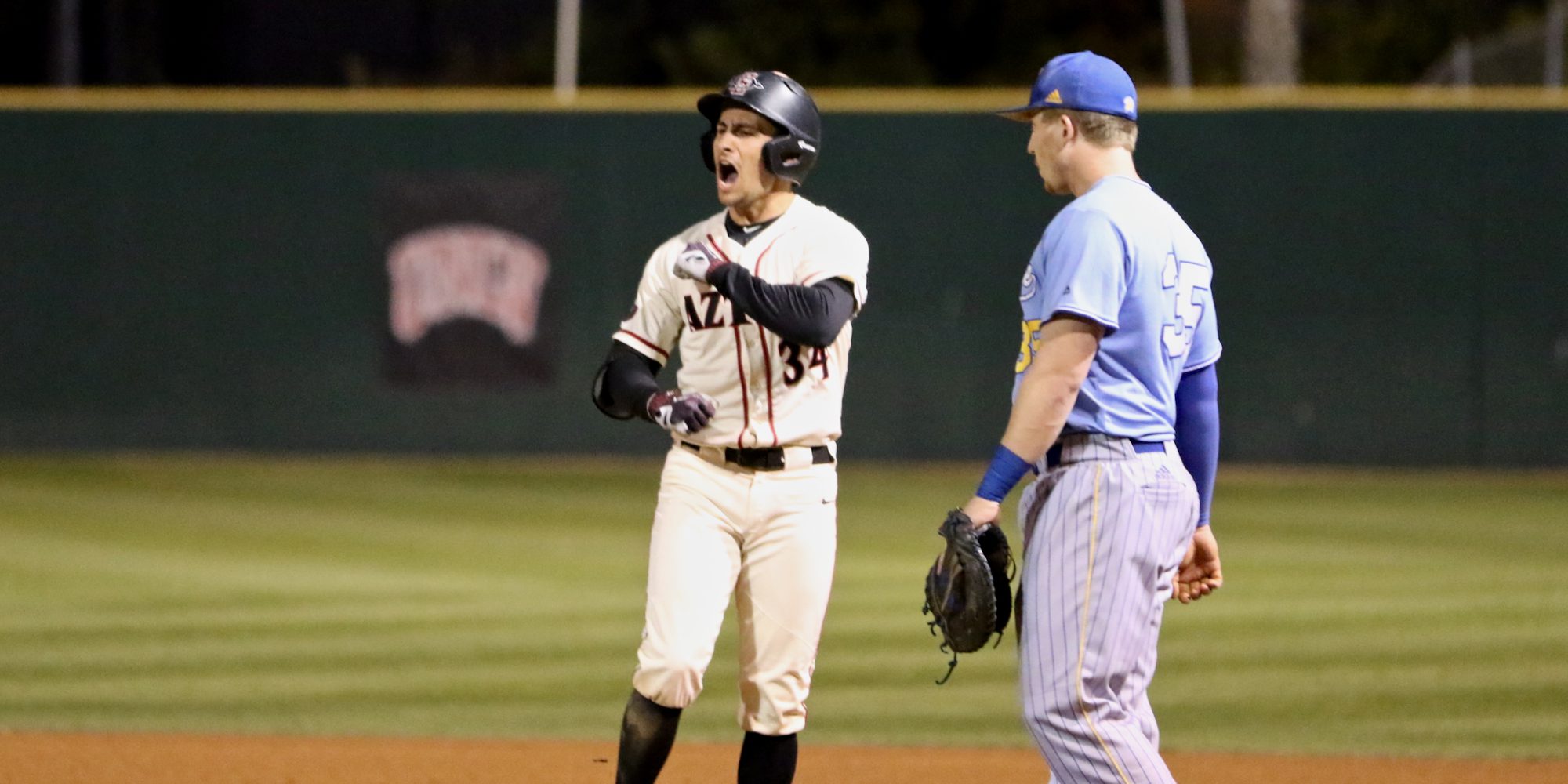 Two Aztec seniors had tied the score and quickly untied it, which was fitting after the team’s veterans had called the dugout together before the half inning had begun.

“It was a great job by Chad [Bible] and some of the veteran guys that brought the guys together,” Calabuig said. “Kind of bring them, rally them together and just calm it down and say hey, ‘Let’s relax. It’s only a one-run game. We’ve got three innings to do some work. We’ve seen [San Jose State starter Andrew Mitchel] three times now. We’ll get to him. It’s going to happen.’”

Mitchel had allowed just two hits and had escaped a bases loaded jam in the sixth inning, but a double off the wall and an infield single got the bullpen active and a walk ended Mitchel’s stellar outing. It was then that the Aztecs pushed across the tying and go-ahead runs, the latter on Calabuig’s 125th career RBI to go long with more than 250 hits and 150 runs. 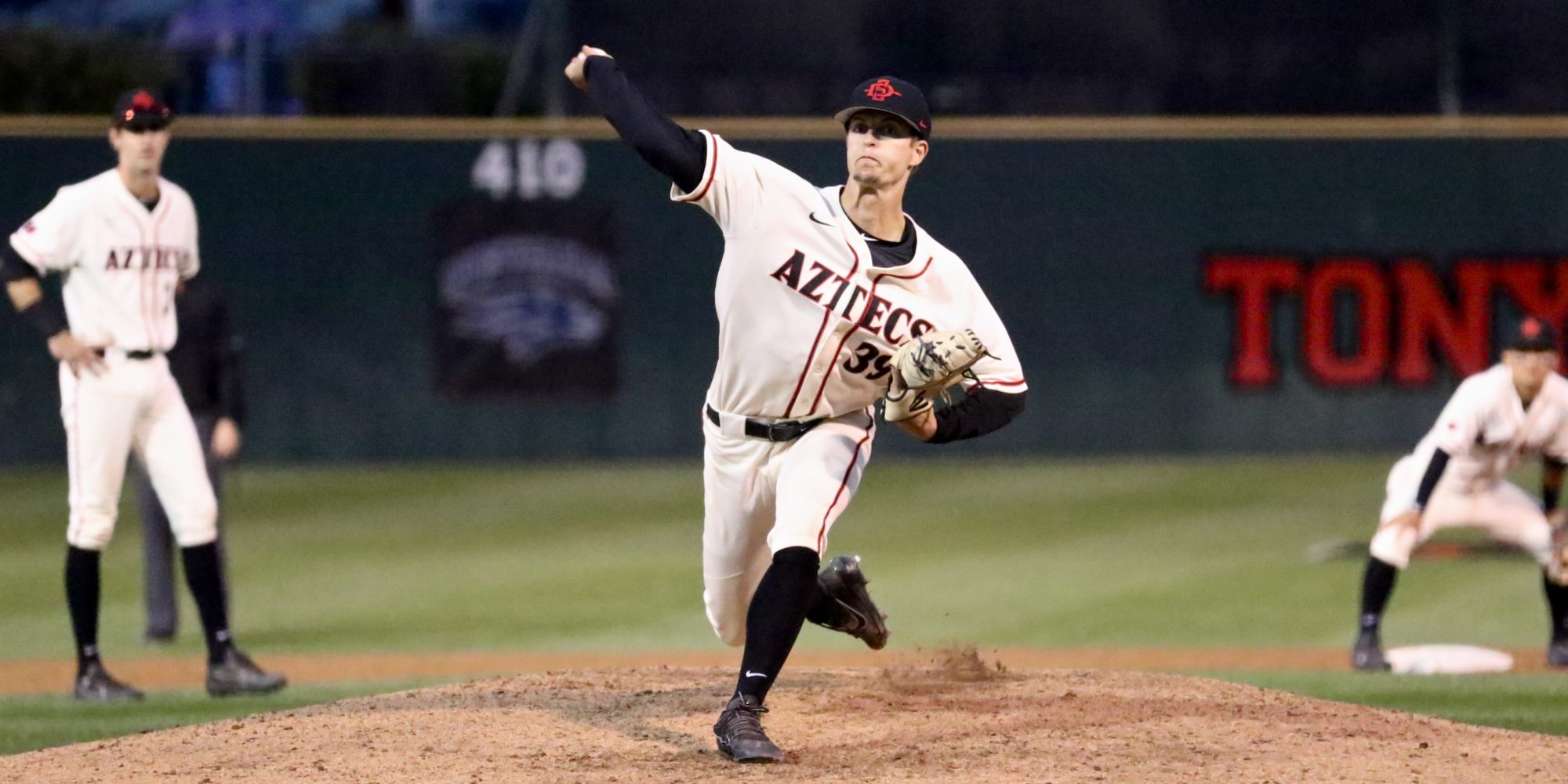 On Wednesday, San Diego State righthander Garrett Hill and San Jose State lefthander Andrew Mitchel were voted Mountain West Co-Pitchers of the Year. A day later they were matched up in the conference’s top pitching showdown.

“From a baseball standpoint, it’s fun to watch those two kids compete against each other,” San Jose State interim head coach Brad Sanfilippo said.  “We knew offensively it was going to be grind it out and take advantage of your opportunities.”

But coming into the matchup, Hill and Mitchel appeared headed in different directions.

Hill had been nearly unhittable early in the season, but seemed to hit a wall and faded down the stretch. After allowing eight earned runs in his first eight starts, including three consecutive scoreless outings at one point, Hill allowed 21 earned runs over a five-start stretch to end the year.

Mitchel had become nearly unbeatable in the weekend swing game in the middle of the series. He had allowed one earned run in each of his final three starts of the regular season, but he lost 2-1 at San Diego State in one of those. He had a shot at redemption and a chance to push the Spartans into the winner’s bracket on Wednesday.

San Jose State had an apparent advantage, but postseason baseball with regional berths on the line tends the bring out the best and Hill rose to the occasion.

“He needed that,” San Diego State head coach Mark Martinez said. “I saw tonight he pitched with more confidence than he has probably the last three outings.”

Both pitchers delivered sterling efforts going back and forth. Through the first three innings, there were three baserunners with one being eliminated by a double play. In the fourth inning, San Jose State (26-29) took a 1-0 lead when David Campbell’s chop bounded over the head of the first baseman and down the right field line, scoring Shane Timmons from first base on a double. Hill stranded Campbell and got out of another jam stranding two an inning later. 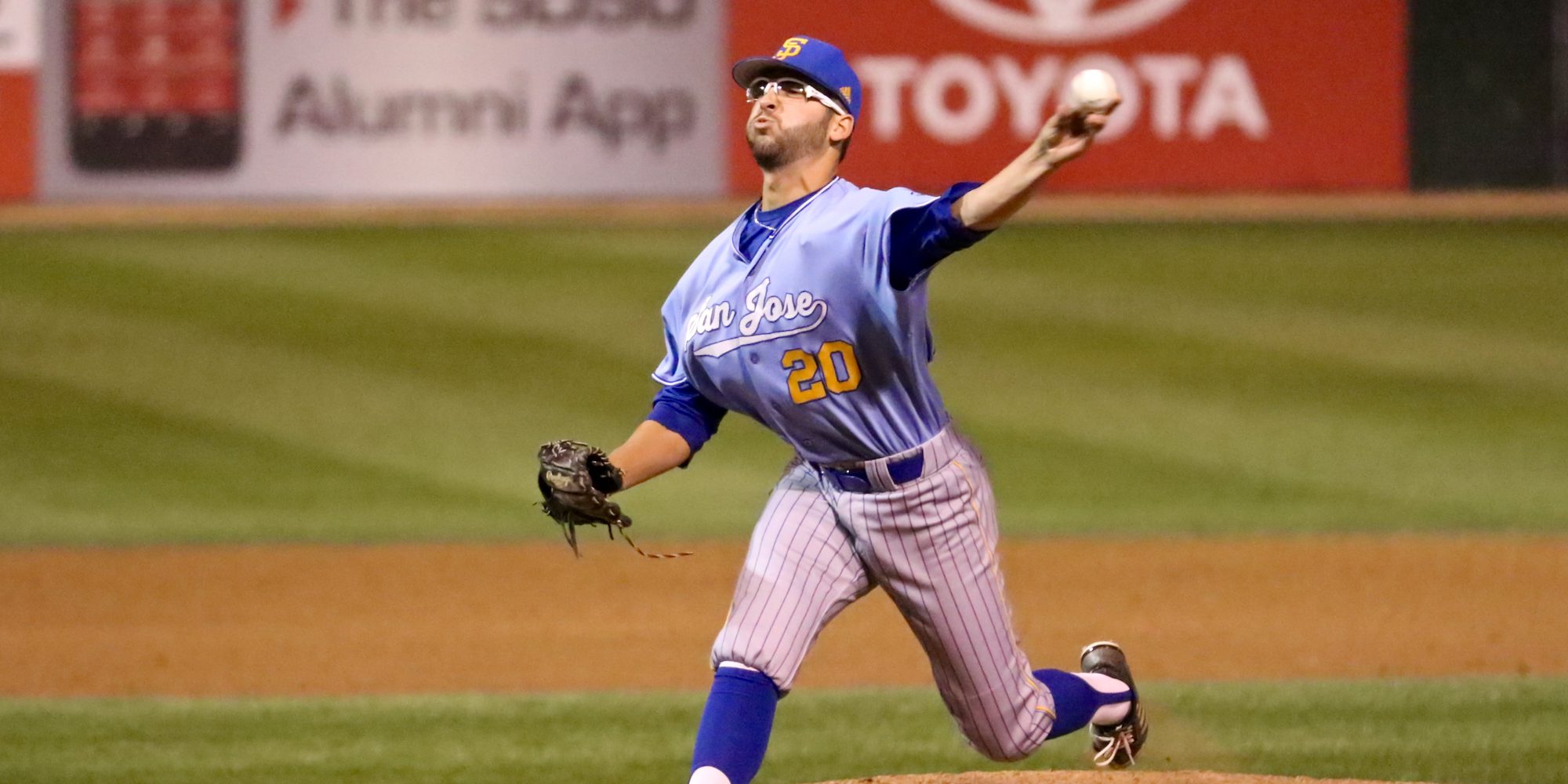 It was the only run until the seventh inning with Mitchel trying to steal the show on San Diego State’s home field. His mid- to high-80s fastball made batters feel like they were swinging at 94 because he was able to move it around the zone and get the Aztecs to chase out of the zone.

“Andrew is just ultra-competitive,” Sanfilippo said. “You can say that about people, but it is a fistfight to try and get the ball from that guy on the mound. He is our leader in terms of his competitiveness and his desire to win.”

He showed his tenacity and a little fire in the sixth inning when he got San Diego State’s most proficient hitter this season, Jordan Verdon, to pop out with two runners on and Julian Escobedo swinging with the bases loaded to escape unscathed. But an inning later, he did not find the same fortune.

“I can’t say enough about Mr. Mitchel. It was an unbelievable performance by him,” Martinez said. “He has done so well against us all year long. We’re very, very fortunate to get out of here with the W.” 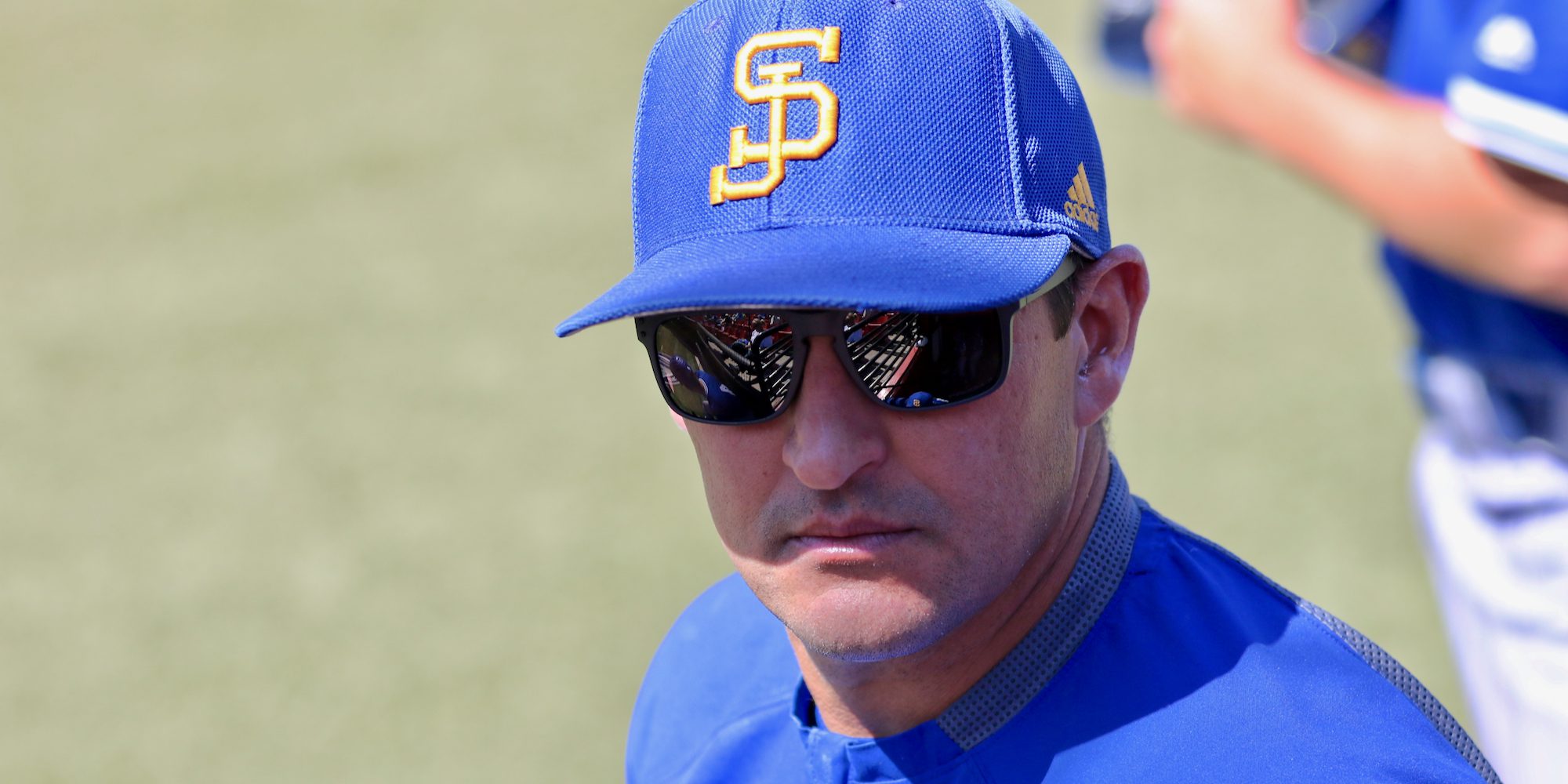 In January, Brad Sanfilippo was sitting at home contemplating what to do during this baseball season. He was a man without a country, a coach without a team.

After three years as an assistant at California, Sanfilippo had been named the program’s interim coach. Dave Esquer bounced back across the bay, returning to his alma mater, Stanford, after 18 years with the Golden Bears. But after a search, Cal hired Mike Neu from Pacific as its head coach and Sanfilippo wasn’t retained.

Sanfilippo got a couple of offers that didn’t feel like ideal fits. He was interviewing with colleges and considering some high school opportunities, but he was determined to make the most of the separation. If the right opportunity didn’t come along, he was content to stay at home with his young daughter.

But then he got a phone call that was a game changer.

San Jose State had placed head coach Jason Hawkins on administrative leave while it executed an internal investigation into potential NCAA violations concerning practice hours. Sanfilippo interviewed with the school and was appointed interim head coach on Jan. 29. He had three weeks to get acquainted with the team and try to incorporate pieces of his own system before the start of the season. There wasn’t time for a full installment, but he did have an advantage. He had recruited several of the Spartans’ veteran players as San Jose State’s recruiting coordinator and third base coach in 2013 and 2014.

“I’m grateful for the opportunity to be able to come back and actually coach some of the guys,” Sanfilippo said. “To get back and to have some familiarity with each other, I think that was helpful for everybody just to have that relationship already established.”

When Hawkins resigned in the days leading up to the season, Sanfilippo knew he was getting the reins for the year. This would be his team. He turned to the team’s elder statesmen.

“I had a couple sit-downs in my office with the seniors,” Sanfilippo said. “Just kind of laid it all on the table in terms of what they needed from me and what I needed from them.”

An early three-game win streak pushed the Spartans to 5-4, but they’ve been fighting to get back to .500 ever since. They lost 15 of their next 20 games, which seemed par for the course for a program that was picked to finish last in the conference. It hadn’t won 20 games in five years, hadn’t had a winning record since 2011 and hadn’t made an NCAA regional since 2002. 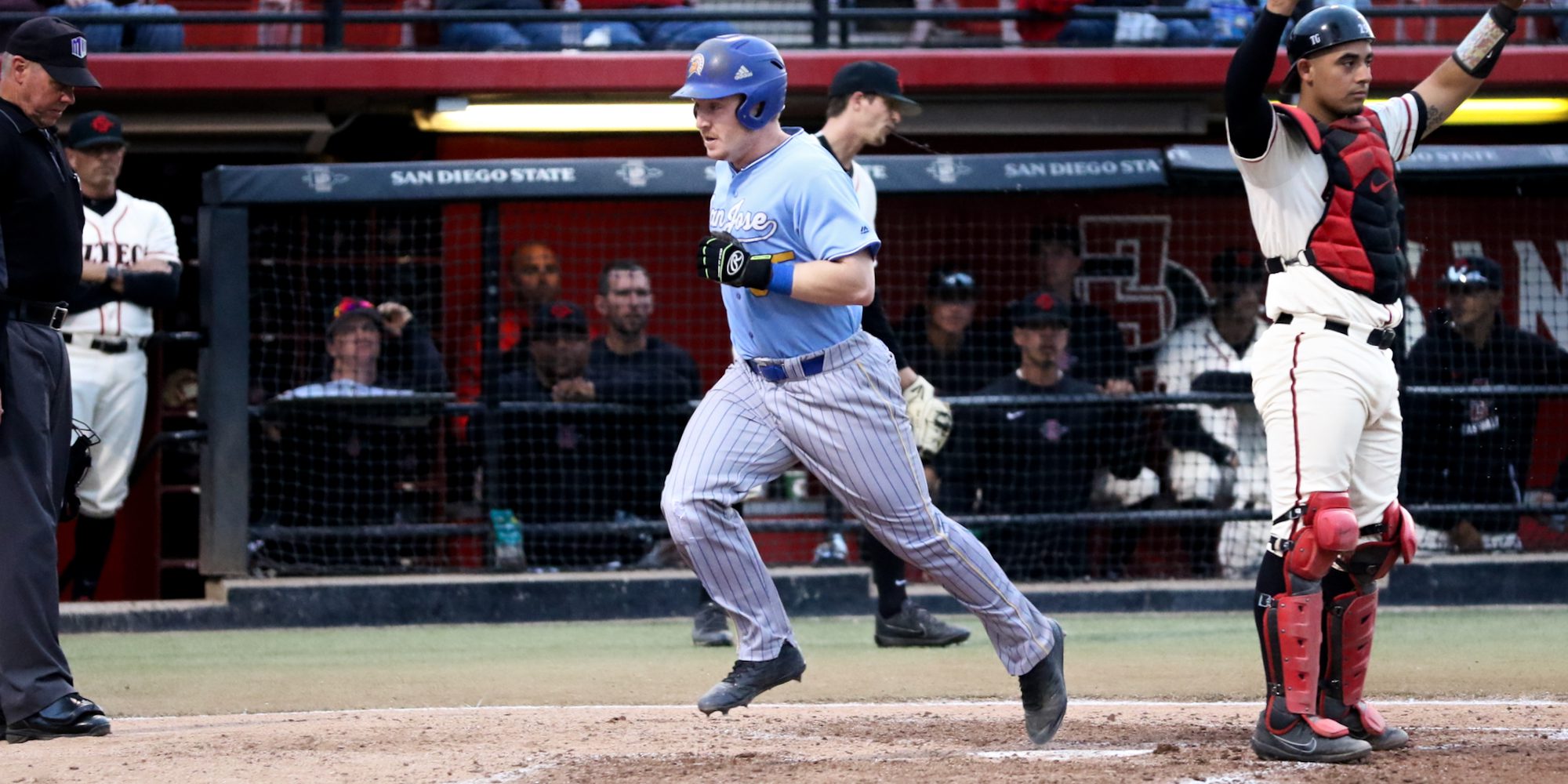 Shane Timmons is one of five senior regulars in the San Jose State lineup. (Shotgun Spratling)

But slowly San Jose State started to turn the corner.

It started with a series loss to Nevada. The Spartans couldn’t hold an early lead in the first game, losing 10-9. They rallied late to tie the next day, but lost 5-4 in extra innings. Then on Sunday, they beat the Wolf Pack to salvage the series. Two tight losses and a win. They built off their weekend finish with a midweek win over Santa Clara. The next weekend, San Jose State won a rivalry series on the road at Fresno State. That started a run of six straight weekends where the Spartans could not be vanquished. They won five series and split a sixth.

“We had some turning-point games that kind of gave a glimpse into how good our team could be when we played well,” Sanfilippo said.

The Spartans finished the regular season going 16-9 in their final 25 games to push themselves into the Mountain West tournament. Their first win during that stretch, 15-7, over Fresno State was one of only two by more than three runs. San Jose State found ways to win the tight games they had previously let slip away.

“It’s been an awesome run to see them play as well as they’ve played,” Sanfilippo said. “These seniors especially have had some hard times. It’s been fun to watch them celebrate together and have some success. That makes tonight hard. When you’re playing high-level baseball games, sometimes they finish like this.”

It was a tough loss that puts the Spartans on the brink of a conclusion to their improbable season. However, the overall experience this year is one Sanfilippo won’t be able to forget.

“For me to just be able to spend time with these guys and help them, coach them and watch these guys develop and become the baseball team that we’ve become, it’s been a real special year for me coaching wise.”

San Diego State senior outfielder Chase Calabuig talks about his game-winning hit and getting to play the Mountain West tournament at Tony Gwynn Stadium. He also discusses how the Aztecs’ MWC tournament and regional experience can help them this week:

Aztecs head coach Mark Martinez talks about the Aztecs’ 2-1 win over San Jose State in the opening round of the Mountain West tournament and the fight of his team. Martinez also talks about the pitchers’ duel between Garret Hill and Andrew Mitchel and hosting the tournament at Tony Gwynn Stadium: