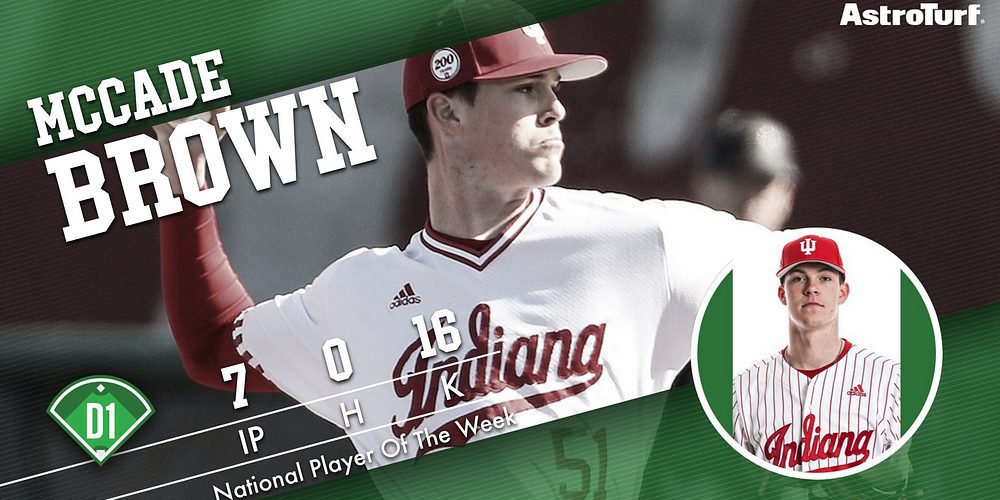 After an outstanding 12 strikeout debut against Rutgers last week, it was difficult to envision McCade Brown toping that performance in his encore against Penn State over the weekend, but the fourth-year junior did just that.

Toeing the rubber against the Nittany Lions on Saturday, Brown’s evening got off to an inauspicious start as he missed his spots early and walked a pair of hitters in the opening frame.

As pitching coach Justin Parker ventured out for a mound visit, he brought with him a rosin bag to see if he could help Brown improve his grip on the dry brisk night. He also offered coaching insights to help with the righthander’s rhythm.

“I just talked to him about his tempo,” said Parker. “When he gets into a better tempo and a little more upbeat with his timing, everything falls into place. I thought he was a little bit stagnant early trying to find it, and as he got off to a little bit of a rocky start, he slowed down even a little bit more.”

“My timing was kind of off,” said Brown of Parker’s visit. “So, he was just talking to me about some of my different queues. Getting my glove tap back into my mechanics and a little bit with grip as well.”

The meeting on the mound worked, and after the visit Brown proceeded to punchout 10 of the next 11 hitters.

Leaning on a steady diet of fastballs and curveballs, the 6-foot-6, 225-pound hurler tossed seven innings of no-hit baseball and tied a program record with 16 punchouts. Outside of the two walks in the first, just one additional Nittany Lion reached base during the contest. Penn State second basemen Gavin Homer was hit by a pitch in the sixth, but he was promptly picked off by Brown after straying too far off the bag.

Brown generates some of the easiest velocity you’ll see among the college ranks, and the heater averaged 93.5 mph on Saturday, topping out at 96 mph.

Coming in at 79-83 mph with 12-to-6 movement, Brown’s spike curveball was unhittable on Saturday, as the pitch elicited 15 empty swings on the day. He missed bats with his fastball and slider as well, but the newly developed curveball was the outpitch of choice.

“I really do trust the curveball now, even though it is kind of a newer pitch in the past year,” said Brown. “I tried to use the slider more in early in counts and then definitely go to curveball for the put-away. But I trust both and it just depends on what’s working that day.”

Well known in scouting circles for several years, evaluators were just waiting for Brown to show more consistent results in games that matter after entering the season with a disproportionally high 14.85 ERA and 13 free passes in just 6.2 collegiate innings. In stark contrast, through two starts this season, he’s now struck out 28 hitters in 14 innings compared to just two walks.

“I think maybe it appears to everyone outside of here that it’s an overnight thing more than it does to us, said Parker. “We were expecting more of this in game production to happen last spring, and then COVID hit. So, I think he appears to be more of a hidden commodity to others than he’s been in our building. A lot of it is physical development, core control and just continuing to grow and add strength. He’s young for his grade, his stuff has been loud, but he’s gotten more and more comfortable.”

Brown produced video game numbers last summer, giving us a glimpse of things to come. Pitching in the Kernels Collegiate League, the hometown product allowed just two hits in 19 innings, striking out a remarkable 44 hitters during that span. He credited at least a portion of his success to being able play in his hometown and with fellow Hoosiers Gabe Bierman and David Platt, commenting that he and his teammates supported one another as they worked on refine their respective arsenals.

Brown and the Hoosiers will look to stay hot against in state rival Purdue this weekend in Bloomington.