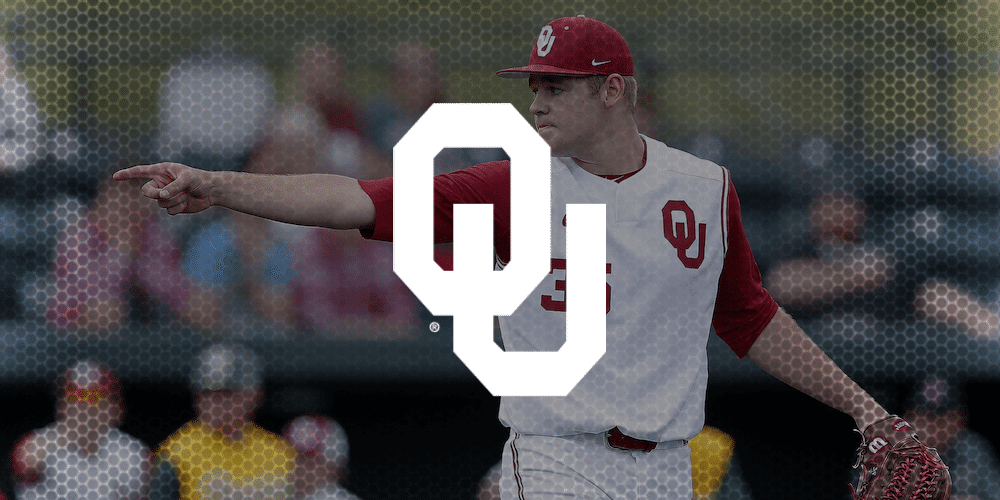 There might be some tough holes to fill, but there are plenty of reasons for optimism at Oklahoma as Skip Johnson’s program gears up for the 2019 campaign.

The Sooners put together a productive 2018 season that almost ended with a trip to the super regional round. However, Mississippi State’s heroics derailed that train and OU had some injuries during the regional, including one to Heisman Trophy winner and center fielder Kyler Murray.

Murray and others are now gone. Murray showed some big-time power during his time with the Sooners, while Johnson’s club now has the tough chore of replacing All-American outfielder Steele Walker as well. Cade Harris, another productive hitter on last year’s club, also must be replaced in the spring.

That’s just the beginning for the Sooners.

On the mound, the Sooners have the tough job of replacing a pair of weekend starters in Jake Irvin and Devon Perez, while Austin Hansen and others will be missed on the back-end of the bullpen.

Fortunately for Johnson and Co., Nathan Wiles returns after logging some significant innings last season, while Braidyn Fink is coming off a huge fall and Cade Cavalli showed premium stuff throughout the fall and likely will focus primarily on pitching in the spring.

The good news from a positional standpoint is OU will have one of the better defenders in the country in Brandon Zaragoza back at shortstop, while it’s also pleased to have Brylie Ware back at the hot corner. OU also has some stability behind the plate with the return of Brady Lindsly and Justin Mitchell, who platooned and logged significant innings last season.

So, where does this team stack up with last year’s in terms of fall progress?

“I think last year’s team was, of course, older, and I would say because of that, this club is not ahead of that team as of right now,” Johnson said. “That team was much older, and the fall was more of just getting guys back on the same page. With this team, we’ve got a lot of guys who are still in the process of development and trying to get better each week.

“The biggest thing I want to see from this team, is what are doing to get better each week?,” he continued. “Did we make the routine plays, did we communicate well, and things like that. You kind of go down the checklist and make sure you’re making progress.

Last season, the Sooners had an experienced rotation that included a pair of absolute work horses in Irvin and Perez. Those two worked well over 150 innings and were keys to OU’s success.

One for sure bet to be in the rotation is husky 6-foot-4, 228-pounder Nathan Wiles. Wiles tallied a 3.54 ERA in 15 starts last season and had a strong fall for the Sooners. He’ll occupy the No. 1 or No. 2 spot in the rotation. Wiles doesn’t have blow-away stuff, but he’ll command the zone and has enough stuff to keep hitters honest.

The big riser right now for the Sooners is 6-foot-4, 226-pounder, Cade Cavalli. Cavalli played both always last season, and likely will do that again in the spring, though Johnson made it clear he’d rather allow Cavalli, who has a premium arm, to focus on pitching.

Cavalli had a big fall on the bump. He sat 93-96 mph with his fastball, while also showcasing a power curveball at 80-84 and a slider/cutter at 88-91. The hard-throwing righty still needs to be better with his command at times, but Johnson loves the progress he’s making.

“His stuff is really electric, and he’s really good when he stays within the framework of being a pitcher and not a thrower,” he said. “It’s always been interesting to me, with pitchers I’ve worked with. The more we talk about swing and miss, the worse their numbers seem to be. I just want Cade to go out there and pitch, and if he does that, I like his chances. He just needs to avoid getting out of rhythm at times, which is what hurt him at times last year.”

Though the third spot in the rotation is still somewhat fluid, the safe bet right now is sophomore lefthander Levi Prater. Prater is a 6-foot, 174-pounder, who showed more velocity this fall, sitting more 89-91 and up to 92 mph with the fastball, while showing good overall stuff throwing across his body.

Another starting option could be Canadian righthander Ben Abram. Abram has a massive physique, standing at 6-foot-7, 264 pounds and could be an immediate impact arm. He will sit 86-89 mph with his fastball, but he’s a big and tall strike-thrower, who has feel for three pitches. Johnson said Abram reminds him a little of Wiles before his first season with the program.

Overall, the big key to this group is Cavalli. If he can match his stuff with pitchability, it gives the Sooners a bonafide ace on Fridays, while also having a quality and experienced starter in Wiles on Saturday, and a solid lefty like Prater to finish things off on Sunday.

If Cavalli doesn’t work out, there are other options, who for now, will have important bullpen roles.

The bad news for the Sooners is they must replace hard-throwing Austin Hansen and others. The good news? Hansen was one of those premier arms who stepped up last fall and turned into a big-time reliever in the spring.

Perhaps the Sooners have some options entering the spring that could follow those footsteps.

One of those guys could be junior lefthander Braidyn Fink. Fink is a 6-foot-1, 216-pounder, who threw some important innings last year, too, but who will likely occupy the closer role in 2019. Fink was terrific this past fall, sitting 90-93 and up to 94 mph with his fastball, while also showcasing an 84-87 mph slider. He has power and swing and miss type of stuff and could be a big-time stopper.

Sophomore righty Zack Matthews and freshman righty Wyatt Olds also will have important roles. Matthews had a good fall, while Olds showed consistency and an ability to be an immediate impact arm.

Jason Ruffcorn is another interesting option, but will he pitch in 2019?

Ruffcorn, a 6-foot1, 194-pounder, had an outstanding fall, but he’s currently waiting to see if he gets a waiver from the NCAA to play immediately after transferring from Texas A&M. A source says the decision is 50-50 at this point, though an initial request was denied.

Ruffcorn didn’t have much of a role for the Aggies, but he showed premium stuff this fall. He clearly took a step forward. He sat 90-94 and up to 95 with his fastball, while also showing a hard upper-80s slider. He would be an instant impact guy, but the Sooners might need to wait until 2020 for his services.

If Ruffcorn can’t go in ’19, the Sooners will be a little light in the high-quality depth department in the bullpen. However, OU is holding hope that the NCAA will reverse course with his appeal.

As we did in our last fall report, it’s time to take an inside look at the position battles for the Sooners. Let’s get started:

C — The Sooners have a pair of strong options here in Brady Lindsly and Justin Mitchell. Both earned significant playing time back there last season, while the two also have some versatility. Mitchell played in the outfield during the Tallahassee Regional, while Lindsly was a high school shortstop.

“We’ll definitely platoon out there,” he said. “Brady can play a few more positions than catcher if he needs to. After all, he has experience with that from high school. He can go to other spots in the infield, and he can go to first base. And Justin, of course, played in RF in the regional last year, so he can move around, too.”

1B — As we mentioned earlier, the Sooners will use Cavalli here at some point, but Johnson would prefer to not give him a heavy workload in the field. With that said, look for someone like sophomore Tyler Hardman to play first. Hardman is a 6-foot-3, 213-pounder, with a consistent offensive approach, and he also had the best fall of anyone on the team.

“Hardman was a big-time prospect out of high school and probably had the best offensive fall of anyone,” he said. “He’s going to play first or DH for us.”

2B — OU must replace Kyle Mendenhall, and there are a pair of junior college transfers in the mix: Conor McKenna and Tanner Tredaway. McKenna is a 6-foot-2, 200-pounder, who runs really well, can hit with consistency and who shows excellent instincts in the field. Tredaway has some versatility. Though he’s in the mix at second, he also could play in the outfield or at other positions if need be.

“Conor is a plus runner and defender, and I think he’s really going to hit,” Johnson said. “Tredaway hit something like .400 or so at Seminole last year, and I think he’s a guy who could play a little outfield for us, too. I think both guys could help us in other ways.”

SS — This is the strong suit of this Oklahoma team. Zaragoza is a 5-foot-11, 160-pounder, who finished last season with a fielding percentage just below .950. Zaragoza is a premier defender and provides stability on the left side of the infield when combined with Ware.

3B — This is another key position where the Sooners have experience back. Brylie Ware hit .331 (second on the team) last season and returns for another campaign. Ware made just five errors last season.

OF — The Sooners have some holes out here with the departures of Harris, Murray and Walker. One of those spots is likely to go to redshirt sophomore and junior college transfer Jordan Vujovich. Vujovich is a 6-foot, 192-pounder, who showed consistency and hits well from the left side, while senior Blake Brewster and freshman Milan Walla also are in the mix for a spot. Brewster has experience and Walla is a good athlete with some intriguing upside. Last but not least, the Sooners have another interesting option in Diego Muniz. Muniz is a 5-foot-8, 195-pounder, who had a strong fall at the plate. He can play in the outfield, or potentially at third or second base.