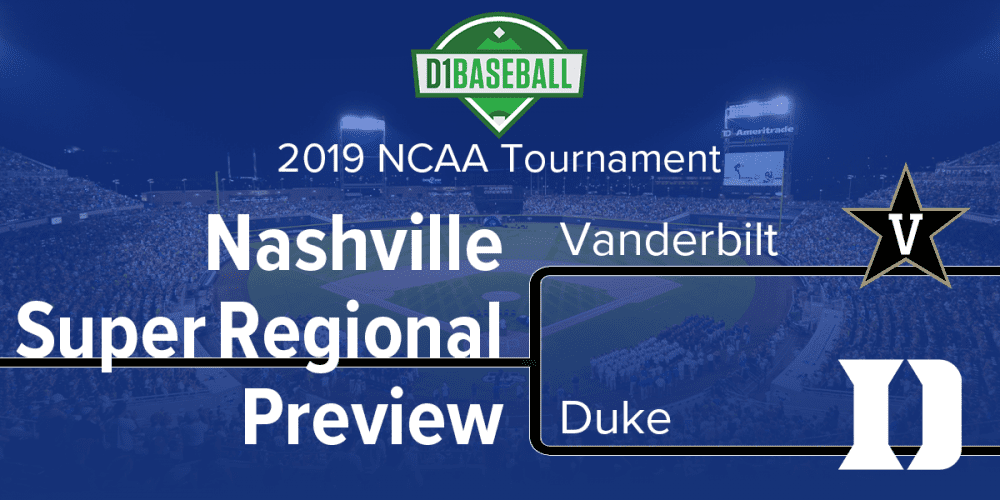 How Duke Got Here
Schedule and Results | Team Stats and Leaders

After reaching its first super regional a year ago, Duke lost a host of everyday regulars and entered 2019 just outside the preseason Top 25 rankings. High-profile lefties Graeme Stinson (a first-team preseason All-American) and Adam Laskey figured to anchor a loaded Duke pitching staff, but both southpaws missed most of the season due to injury, and Duke somehow finds itself in its second straight super regional anyway. At the start of April, the Blue Devils looked like a distant long shot to even make a regional, buried at 3-9 in the ACC. But the return of sophomore second baseman Joey Loperfido from injury helped solidify the defense and spark the offense, and the Devils went 18-12 down the stretch once Loperfido returned, finishing .500 in the ACC and sneaking into regionals as one of the last four teams in. Then they beat Texas A&M twice and host West Virginia once to win the Morgantown Regional, allowing just one run combined in the final two wins.

How Vanderbilt Got Here

Coming off back-to-back super regional appearances, Vandy entered this spring as the No. 1 team in the D1Baseball Top 25, and it finished the year ranked No. 1 in the RPI, earning the No. 2 national seed after winning the SEC’s regular-season and tournament championships. Vanderbilt is simply a juggernaut, and the Commodores have been just about unbeatable for two solid months, going 25-1 since April 16. They waltzed through the Nashville Regional, scoring 28 runs in three games against Ohio State and Indiana State.

If you’re nitpicking, Vanderbilt’s starting rotation isn’t nearly as imposing as its lineup or its bullpen … but it’s still really good. Drake Fellows (12-0, 3.87) is a proven three-year workhorse with a serious competitive streak atop the rotation, Kumar Rocker (9-5, 3.91) is a top-of-the-draft talent who has come on strong down the stretch of his freshman year, and Patrick Raby (9-1, 2.90) is another battle-tested competitor who has been a fixture in the rotation for four years. And Vandy has a fourth quality option in strike-throwing sophomore Mason Hickman (8-0 2.12, 107-20 K-BB in 80.2 IP), who started in place of Raby in the regional clincher and fired seven innings of one-run ball.

The bullpens are the biggest strengths of both of these pitching staffs. Duke has a big-time closer in RHP Thomas Girard (2.15 ERA, 9 SV, 61 K in 46 IP), who works in the low 90s with a wipeout slider helps him rack up strikeouts in tight spots. Girard and deceptive lefty Matt Dockman (6-1, 3.49) are the two linchpins in the bullpen, and the Blue Devils will lean heavily upon them, but freshman Jack Carey also contributed quality innings in the regional and can miss bats with his tight breaking ball.

Duke’s bullpen is good … but Vanderbilt’s bullpen is great. Nobody can match Vandy’s lefthanded velocity, as Jake Eder (2.88 ERA), Hugh Fisher (3.38) and Zach King all have big-time stuff. And righty Tyler Brown (2.66 ERA, 14 SV, 56-8 K-BB in 40.2 IP) is a premium closer, while Ethan Smith (4-0, 3.30) is yet another big arm from the right side. When Vanderbilt throws strikes — and it has done a much better job doing that as the year has progressed — this bullpen can be overwhelming.

Duke’s lineup is scrappy and competitive but not intimidating. The Blue Devils have some big-bodied middle-of-the-order guys who can drive the ball out of the park from time to time, but nobody has more than 10 homers (Michael Rothenberg), and the Devils rank just 133rd nationally in batting (.270) and 116th in scoring (6.1 runs per game). Duke does a good job hitting situationally up and down the lineup, and when catalysts Joey Loperfido and Kennie Taylor get on base, this lineup can put together big innings.

Vanderbilt simply has one of the most terrifying offenses in the country, ranking fourth nationally in both batting (.318) and scoring (8.5 runs per game), third in doubles (152) and slugging (.524), fifth in homers (87), sixth in OBP (.418) and 10th in walks (341). Pick your poison with this team — there’s no room to breathe. The bottom third is more pitchable than the top two-thirds, but Harrison Ray and Ty Duvall are capable bat-handlers, and Julian Infante is still a long ball threat in the nine-hole (11 HR). From 1-6, you won’t find a more dangerous group than Austin Martin, JJ Bleday, Ethan Paul, Philip Clarke, Pat DeMarco and Stephen Scott.

Duke’s defense was a real problem in the first half of the year, when second baseman Loperfido was sidelined due to injury, forcing several Devils to play out of position. It has been much better since Loperfido’s return, but a major key is the health of standout freshman shortstop Ethan Murray, who missed regionals after getting hit in the face by a pitch in the ACC tournament. He was expected to return in time for supers. Taylor is sensational in center field, a good runner with exceptional instincts and first-step quickness. Overall, this is a much better defensive team than its .968 fielding percentage suggests, since that figure was skewed by the rough first half — but it’s not a special defensive team.

Vanderbilt, on the other hand, is an excellent defensive team, and it ranks eighth in the nation with a .981 fielding percentage. Paul has made a seamless transition from second base to shortstop, providing steady veteran presence and playmaking ability. There aren’t any true elite defenders here, but the Duvall/Clarke tandem behind the plate is capable enough, the infield is very solid and the same goes for the outfield, where DeMarco and Bleday can really throw.

Give Duke coach Chris Pollard and his staff a ton of credit for turning the season around and getting their players to buy in, and give the players themselves a ton of credit too. Duke looked dead and buried, and then it rose from the ashes and found a way to get back to super regionals, despite the attrition on the mound. Duke is one of those “sum is greater than the parts” teams with serious toughness and character, and it does have valuable postseason experience from last year’s run to super regionals.

But once again, Vanderbilt gets the edge. The Commodores are loaded with upperclassmen who have been to back-to-back super regionals and are on a mission to get the Commodores back to Omaha and cut down the proverbial nets. That group of upperclassmen includes an uncommon core of ultra-experienced seniors in Paul, Scott, Raby and Infante, providing invaluable leadership and poise. Vandy also has the advantage of playing at home, where it feeds off the crowd and knows how to play every nook and cranny of its quirky stadium.

AN OPPOSING COACH BREAKS DOWN DUKE 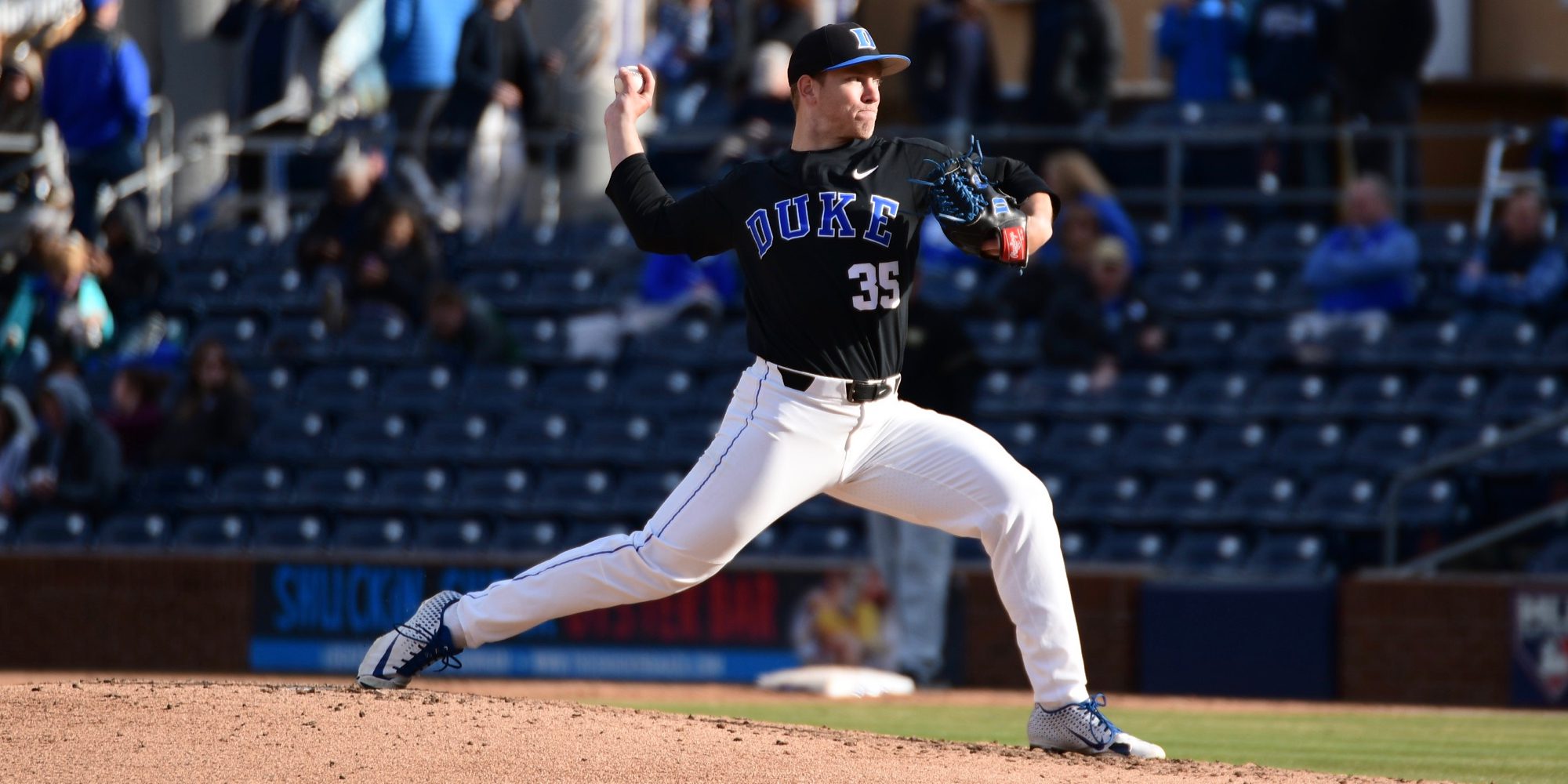 “I really like their team. I think Coach Pollard and his staff do a tremendous job of getting them ready for games and weekends like this.

“To build the program from where it was …