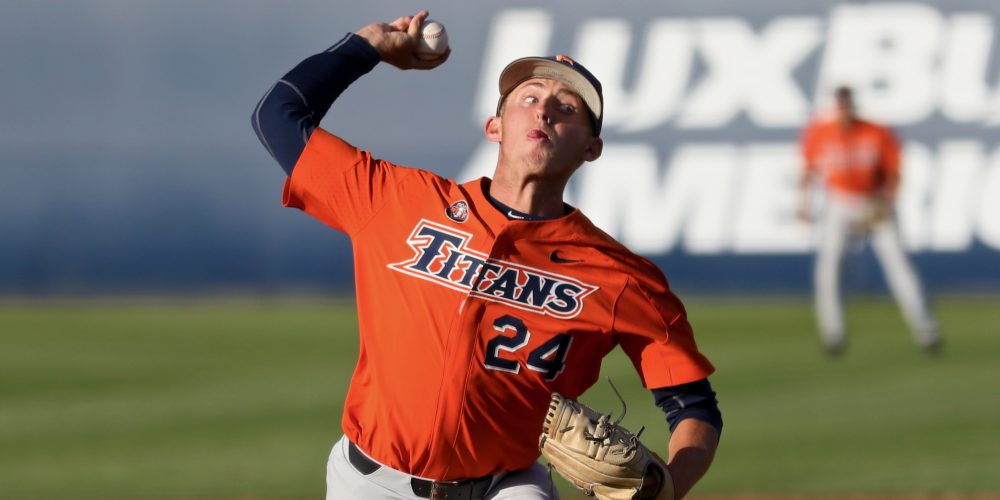 One of the most intriguing series of college baseball’s opening weekend is occurring in Pensacola, where No. 24 Oklahoma is taking on Virginia. The Cavaliers made a loud statement in Friday’s opener, holding the Sooners to two hits in a 6-0 victory.

Pitching was UVa’s bugaboo a year ago, but it might well be a strength in 2020. Fireballer Griff McGarry started and turned in five innings of one-hit ball, while striking out seven and walking three. If he can keep his walk rate in check this year, he has the talent to be very special. And Virginia’s bullpen might be one of the ACC’s best, anchored by power righty Kyle Whitten, quick-armed lefty Andrew Abbott and sidewinder Stephen Schoch, who combined to work four shutout innings of relief Friday.

The ‘Hoos were just outside our preseason Top 25, and if they can take another game against the Sooners this weekend they figure to be a shoo-in for a spot in the rankings come Monday.

Grand Canyon entered the season as one of the teams to beat in the WAC, so it’s no huge upset when the Antelopes beat a ranked team. But GCU certainly raised some eyebrows by dominating No. 22 Oklahoma State 10-3 on Friday.

Ace Kade Mechals — who went 11-1, 2.16 in a very offense-friendly conference last year — held the Cowboys to just one run over five strong innings of work, striking out eight. And the ‘Lopes hung five runs in two innings on Bryce Osmond, one of the most talented and highly ranked freshmen in the country. Drew Smith had a monster game for the Antelopes, going 3-for-6 with a double, a homer and six RBIs. Juan Colato added three hits and three RBIs for Grand Canyon.

A number of things caught my eye from the ACC slate Friday:

• Not only did North Carolina junior righthander Joey Lancellotti thrive in a starting role after spending the last two years in the bullpen, but he also announced to college baseball that he’s now a two-way player to be reckoned with. Lancellotti held Middle Tennessee to two runs on two hits over 5.1 innings in just the fourth start of his career, leading UNC to a 15-3 win. But he also batted in the 5-hole and delivered two hits and two RBIs. Lancellotti arrived on campus as a two-way player, but he registered just one at-bat over his two seasons at UNC — a program that hasn’t featured a notable two-way player in a very long time.

• NC State junior lefthander Nick Swiney picked up right where he left off in 2019. After coming on strong down the stretch last year, Swiney is now being counted upon to serve as the Friday starter, and his season debut was dazzling: 7 innings, 2 hits, 0 runs, 2 walks and 11 strikeouts against a very dangerous James Madison lineup, leading the Wolfpack to a 4-0 win. With a 90-94 fastball and the makes of two above-average to plus secondary pitches, Swiney has all the tools to become an All-American this spring — and he was my breakout star pick in our staff predictions on Friday.

• The biggest upset of the day was Niagara taking down Florida State (see Kendall’s section for more on that), but No. 15 Duke was also knocked off Friday, losing 2-1 to Patriot League favorite Army. Logan Smith silenced the Blue Devils for seven innings, allowing just one hit and no runs while striking out 10, and the Black Knights scored two runs (one earned) off preseason All-American Bryce Jarvis.

There are fewer compelling matchups on the SEC slate this week, but a few things stood out:

• Third-team preseason All-American Cole Henry (4 IP, 3 H, 0 R, 0 BB, 8 K) was dominant in LSU’s 8-1 win over Indiana, a projected regional team. A two-run homer by blue-chip freshman Cade Doughty spotted Henry to a lead in the first, and a three-run blast by Saul Garza broke it open in the third.

• Heralded freshman lefthander Connor Prielipp was outstanding in his debut for Alabama, which clobbered Northeastern 10-0. Prielipp, on a pitch count, earned the win with four shutout innings, allowing just one hit and striking out seven. Fellow freshman Owen Diodati led the offense with three RBIs and four runs.

• Even with JT Ginn on the mound, Mississippi State fell behind Wright State 5-1 in the fifth, but the Bulldogs stormed back to win 9-6. Rowdey Jordan’s two-run single and Justin Foscue’s two-run double highlighted a six-run sixth for MSU.

• South Carolina and Tennessee cruised to matching 10-0 wins against overmatched opponents. Carmen Mlodzinski turned in seven shutout innings for the Gamecocks against Holy Cross. Tennessee was without ace Garrett Crochet (out with some arm discomfort), but juco transfer Chad Dallas threw five shutout, and Sean Hunley followed with four shutout frames in a combined two-hitter.

• In a neat matchup between two teams pegged as sleepers by various D1Baseball staffers, Iowa won a taut 3-1 affair against Kent State. The Hawkeyes are happy to have ace Jack Dreyer back from injury (which limited him to two appearances a year ago); Dreyer allowed just two hits and a walk while striking out eight over five shutout frames. Dreyer also has a wonderful hidden talent, but I won’t spoil it for you — just want for Walter Villa’s upcoming feature on him.

• In one of the day’s most surprising results, Saint Joseph’s upset projected regional team Ohio State, 7-3. Joseph DiValerio held the Buckeyes to just one hit over five strong innings, and the Hawks took control with three runs in the fourth off Garrett Burhenn. Brendan Hueth had three hits and two RBIs to pace the Saint Joseph’s offense.

• And then there’s Nebraska — Kendall has more on Will Bolt’s striking debut as Huskers head coach below.

What better way to begin the season than with a mid-major showdown between Campbell, the Big South favorite, and South Alabama, the Sun Belt favorite.

Campbell junior righthander Cam Cowan made his debut with the Camels. The JC transfer was phenomenal against the hard-hitting Jaguars, taking a shutout into the ninth inning and striking out a whopping 15 hitters. Yet, he still lost, as South Al leadoff hitter Hunter Stokes hit a walk-off home run to beat the Camels.

The two teams combined for 31 strikeouts on the night. On a day where you can get some sloppy baseball, it was all golden at Stanky Field.

Kudos to Campbell and South Al for an Opening Night to remember.

Upset of the Day: Niagara shocks No. 12 Florida State

For eight innings, it appeared Florida State was destined to usher in the Mike Martin Jr. era in style with some stellar pitching and with Mike Martin Sr.’s grandson, Tyler, serving as the Seminoles’ leadoff hitter.

Well, the Purple Eagles had something else in mind. Though FSU led the game 1-0 entering the ninth inning, Niagara put up a three-spot in the frame with two of the runs scoring on walks and the other on an RBI single by Spencer Marcus.

A historic night was ruined for the Seminoles.

There was at least some good news. Heralded FSU junior righthander CJ Van Eyk put together a strong start, striking out eight, walking one and allowing two hits in five shutout innings. Meanwhile, NU was led by Tommy Bednarski, who allowed just one hit in four shutout innings, while Jacob Bruning allowed a run and two hits in three innings and Alex MacKinnon closed out the contest with five strikeouts in two shutout frames.

What a way to start the season by the Purple Eagles.

The Titans welcomed some fresh faces on Friday night as they tripped to NorCal to take on traditional rival Stanford, and they didn’t disappoint in an impressive 7-1 victory.

To no surprise, Fullerton righthander Tanner Bibee put together a strong start, striking out nine, walking three and allowing a run in six innings, while Evan Adolphus struck out four in three shutout innings.

Fullerton’s offense scored two early runs off Stanford ace righthander Brendan Beck before putting up a four-spot in the middle frames. Seven Fullerton hitters finished the night with a hit, while Kyle Luckham had the most productive day with three RBIs. Zach Lew also had a strong showing, walking twice and hitting a triple to help pace the CSF offense.

The Big West had some solid results on Friday. In addition to the Titans being victorious, Cal Poly shut out Connecticut, Cal State Northridge shutout San Francisco and UC Davis defeated Utah at home.

For the Titans, it was all about getting back to business against Stanford.

If first impressions meant everything all the time, the Beavers would be in terrific shape the rest of the season. OSU launched the Mitch Canham era Friday afternoon against New Mexico and could not have been more impressive, scoring a whopping nine runs in the first on the way to an 11-4 triumph over the Lobos.

In that wild first inning, Alex McGarry hit a three-run home run to start it off, Adley Rutschman’s replacement, Troy Claunch, hit a two-run double, Andy Armstrong hit a two-run double and Kyler McMahan hit an RBI single. Talented freshman Micah McDowell, who led the way atop the lineup with two hits, also scored on an error in the first inning.

Highlights from the season-opening win, our 11th in a row.#GoBeavs pic.twitter.com/pqDGEOb7Pl

Later in the game, Claunch hit yet another home run and brought in another run with an RBI single. Claunch finished the day with four RBIs, while Ryan Ober also had an impressive day with a pair of hits.

On the mound, OSU lefthander Christian Chamberlain had a strong first start, striking out five, walking two and allowing just a hit and a run in six innings.

The win over the Lobos was Oregon State’s 11th-straight Opening Day victory, while it was the first time since 2010 to best the 10-run mark in a season opener.

What a memorable day it was for Claunch and the Beavers, and certainly first-year head coach Mitch Canham.

Apparently, there’s something about first-year coaches and their teams having massive first innings. While Oregon State scored nine runs in the first inning out in Arizona, Nebraska went a step further with an 11-run first inning in a 19-9 win over Baylor.

Nebraska’s first inning didn’t include any majestic home runs, but it did include some opportunistic hits with Spencer Schwellenbach, Aaron Palensky, Luke Roskam (twice) and Jaxon Hallmark all recording RBI singles.

Roskam finished the evening with three hits along with center fielder Joe Acker, while Hallmark, Schwellenbach, Ty Roseberry and Cam Chick each finished the night with two hits.

It was a night to forget for Baylor junior righthander Jimmy Winston, who walked two and allowed nine runs (seven earned) on five hits.

New Nebraska head coach Will Bolt will remember this one for a while. Baylor, not so much.