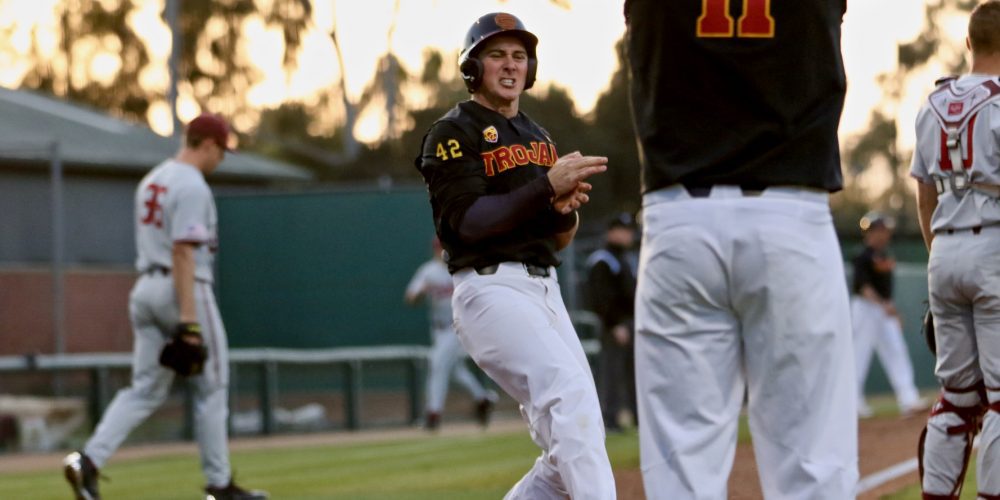 USC Finally Puts The Pieces Together

Clarke helped save the bullpen with the help of an offensive breakout in a 7-5 win over No. 21 Stanford Thursday night at Dedeaux Field to move USC back to .500 in conference play this season.

USC (16-12, 5-5) had scored more than six runs only twice since February and didn’t look to be getting out of their slump early. The Trojans struggled to figure out Cardinal starter Kris Bubic the initial time through the order, going hitless, but things began to open up upon a second viewing. Leadoff hitter David Edson worked a two-out walk and was doubled home by Brandon Perez, who then scored on a Lars Nootbaar single. Five straight Trojans reached — all after Bubic got to two strikes — as USC took a 2-1 lead but left the bases loaded.

Stanford (15-10, 2-5) retook the lead on a two-run double by freshman catcher Maverick Handley on a 3-2, two-out pitch, but Bubic couldn’t hold it. He couldn’t regain the touch he had against USC early. His velocity dipped from 88-92 in the first inning to 85-88 dropping the variance from his plus changeup that stayed between 77-79 throughout his outing.

Bubic also struggled to command the inside half of the plate against right-handers.

“If he can’t get that, then everything kind of allows you to look that way [toward right field] and if he makes a mistake with the change, you have a chance to do something with it,” USC head coach Dan Hubbs said. “I was excited about how the offense swung it. We were able to do some things with the ball up in the zone.”

Catcher Cris Perez, a graduate transfer from Duke, immediately tied the game in the bottom of the fourth with a deep home run to dead center field. He was the first of five straight Trojans to reach base. Edson had an RBI single past a diving Mikey Diekroeger at third base to give USC the lead. After a pitching change, Perez produced the same result and Corey Dempster added a sacrifice fly to put USC up 7-5. It was the first time Bubic had not pitched into the sixth inning this season.