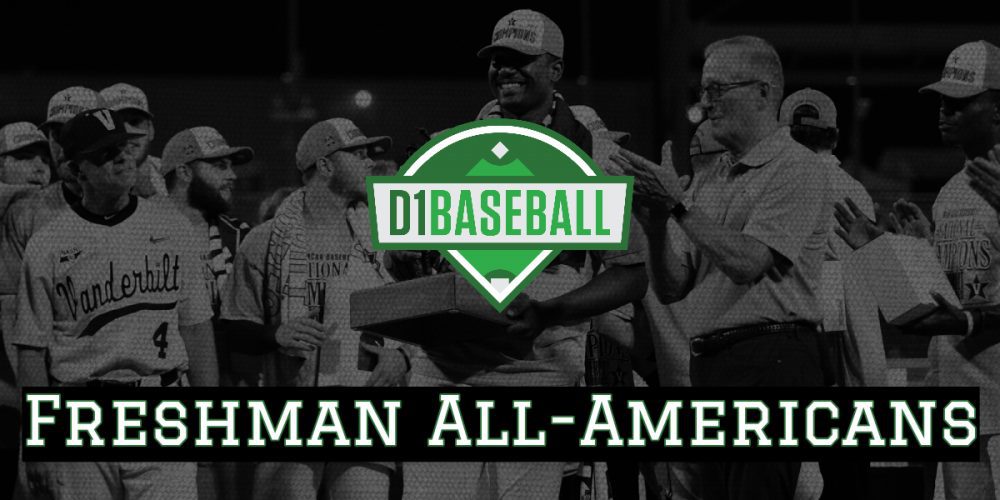 Vanderbilt righthander Kumar Rocker, the Most Outstanding Player of the 2019 College World Series, is the 2019 D1Baseball Freshman of the Year, headlining our Freshman All-America teams.

The highest-ranked freshman prospect to set foot on a college campus last fall (according to our partners at Prep Baseball Report), Rocker lived up to the hype by helping to lead Vanderbilt to its second national championship. He had some ups and downs in the first half of the season, but he really found his stride down the stretch, and he became a national sensation in the postseason. First he threw a 19-strikeout no-hitter in an elimination game against Duke in super regionals. Then he went 2-0, 1.46 with 17 strikeouts and three walks in 12.1 innings in Omaha, keeping Vandy’s season alive by earning the win in Game Two of the CWS Finals. Overall, Rocker finished the season 12-5, 3.25 with 114 strikeouts and 21 walks in 99.2 innings.

The ACC led all conferences with five first-team Freshman All-Americans and nine selections on the two teams. Rocker was one of four SEC pitchers to earn a spot on the first team, and the SEC landed five players overall on the two teams.