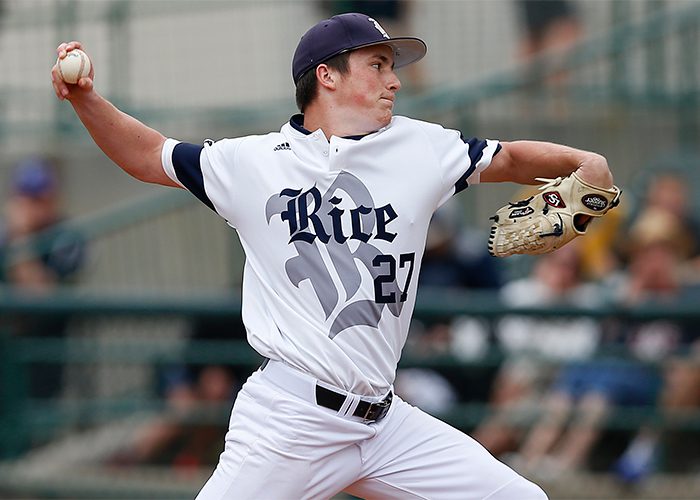 This past weekend, a couple of Big 12 teams made statements to rise to the top of the standings, and even defeat, Texas A&M showed it belong. Miss any of it? We’ll get you caught up with this weekend’s Southwest Region Snapshot:

So far this season, Oklahoma State has played its six biggest Big 12 games on the road, and it has left both TCU and Texas Tech with series victories. After dropping Friday’s contest to the Red Raiders 5-3, the Cowboys responded to win Game Two 8-2 behind an outstanding effort from Michael Freeman (8.0 IP, 0 ER, 1 R, 2 BB, 10 SO), who has now been named Big 12 Pitcher of the Week four times, and won Sunday’s rubber game 6-3 thanks to a four-RBI performance from leadoff man Gage Green. Sunday, Oklahoma State had to dig deep into the bullpen after Tyler Nurdin lasted just an inning, but it was able to piece together a strong enough performance thanks to Carson LaRue in relief. 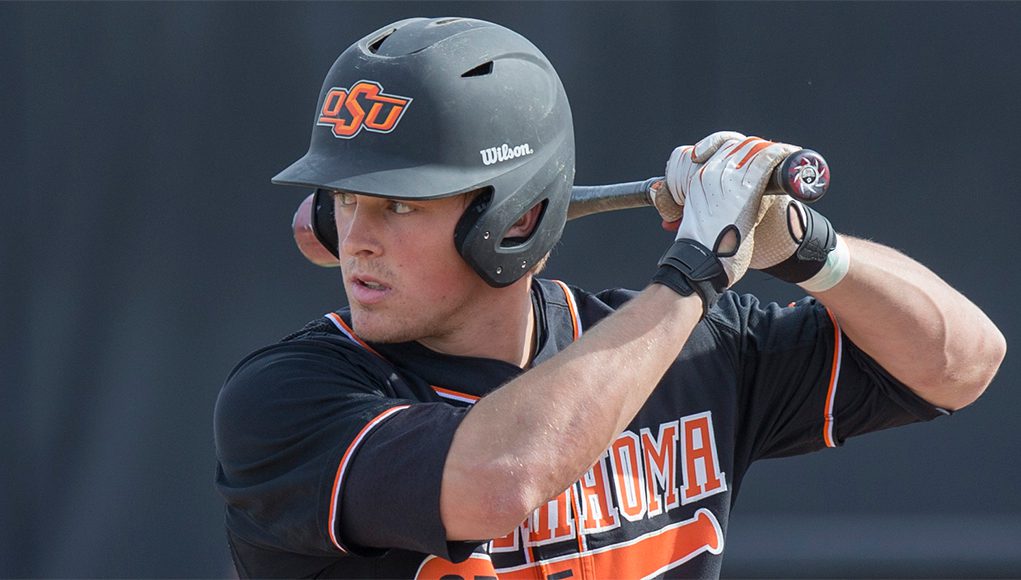 Now, everyone is looking up at the Cowboys (12-6) in the Big 12 standings. They’ve played one more series thus far than second place teams Oklahoma and TCU (both 10-5), but have a neutral-site series with Oklahoma, who it beat 24-2 earlier this season, and a home series against a struggling West Virginia squad remaining. At this point, it would be a surprise if Oklahoma State finished with less than 15 wins in conference play.

Meanwhile, Oklahoma has to not only play Oklahoma State, but it also hosts TCU in the final regular-season series.

Speaking of TCU, the Horned Frogs made a statement of their own. In a series against a desperate Texas team that needed a series win to keep its NCAA at-large hopes on life support, TCU might have buried Texas. After holding on to win Friday 6-5, TCU capitalized on Texas’ mistakes to pull away with a monster inning late in Saturday’s game, and was clearly the better team in a 7-1 Sunday win.

TCU’s talented starting pitching wasn’t up to its usual standards, and neither was the defense, which surprisingly committed six errors in the series. However, the bats picked up the slack. Cody Jones was up to his usual tricks with five runs scored in the three games, but the Horned Frogs enjoyed production from the entire lineup during different portions of the weekend, including the bottom three of that order that combined to score eight of TCU’s 24 runs in the series.

So while Oklahoma dropped two of three at home against Sam Houston State, TCU and Oklahoma State are finishing April on high notes as the conference-deciding series are on the horizon.

Even in defeat, Texas A&M looks the part

Texas A&M has lost back-to-back series in SEC play, with the latest defeat coming at No. 1 LSU in a hard-fought, fairly tight series. There’s really no reason to panic about the Aggies right now, or entertain the idea that the last two weeks in some way overshadows the entire season as a whole. Both LSU and A&M traded blows all weekend, with the Tigers making a couple more big plays late in the game to take the series at home.

When the dust settled after three games, LSU and Texas A&M both scored 15 runs; LSU had just four more total hits, and committed one fewer error. Basically, Baton Rouge hosted a championship-type atmosphere as two Omaha-type teams went toe-to-toe for 27 innings. They should both be better because of it.

With a chance to get back to the top of the American Athletic Conference standings, Houston came through with a big series win on the road despite dropping Friday’s game 2-1 in 11 innings. Against South Florida, which is now tied with Houston for the conference lead at 9-6, outfielder Kyle Survance was not going to let his team lose. UH held on to win 9-8 in Saturday’s contest, and was the better team in Sunday’s rubber game, thanks in part to Survance. The junior went 7-for-10 in the two Houston wins with five runs, four RBI, a homer, a triple, a double, and a steal. 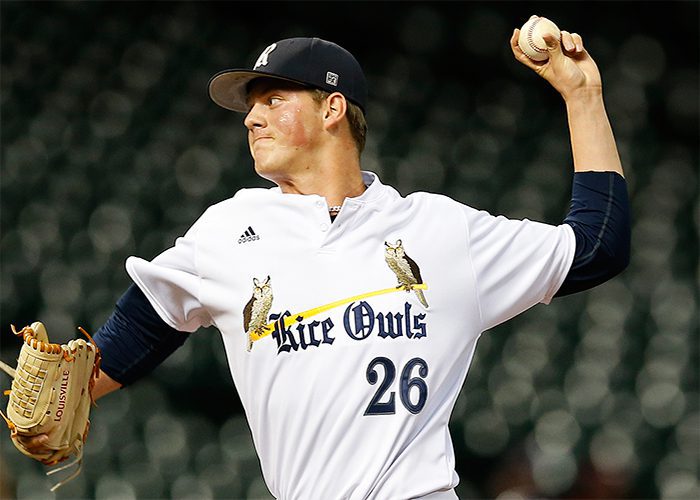 Blake Fox and Rice hope to finish the regular-season on a high note. (Rice athletics)

Now in a four-way tie on top of the conference, Houston is in position to win the league.

Crosstown rival Rice has been dealing with serious issues on the road of late, but appears to have taken a step forward with a road sweep over Western Kentucky. Although the Owls still continue to make errors far too often (half of WKU’s eight runs were unearned), they have to be very encouraged with the starting pitching. Jordan Stephens, Kevin McCanna, and Blake Fox combined to toss 17 innings and gave up just two earned runs with 21 strikeouts. McCanna was particularly impressive as he racked up 11 punchouts in seven innings with no earned runs. Before this series, pitching deep into games had been an issue for Rice’s starters.

With two series remaining, Rice is just percentage points behind Conference USA leaders Florida Atlantic and Middle Tennessee State – Rice has played one more series than both, and is ahead by two in the win column – and it gets a chance to jump Florida Atlantic after an off week.

• After being swept by TCU in what was probably a must-win series for NCAA purposes, the Longhorns are staring a disappointing season in the face. The only way they probably make the NCAA Tournament now is by winning the Big 12 Tournament, and they’ll need to finish Big 12 play strong in order to make sure they have that chance. Augie Garrido said after Sunday’s game that freshman Connor Mayes will likely be moving into the rotation. The righthander has been one of the few bright spots for Texas this year, and profiles as a potential Friday arm in the future with a strong three-pitch mix.

Right now, the best of the best in the Big 12 are starting to rise to the top. There’s probably a slight drop-off after the first two teams, another one after Oklahoma, and then another one after Texas Tech, although we’ll see those two teams in action this weekend. This week’s Big 12 power poll: