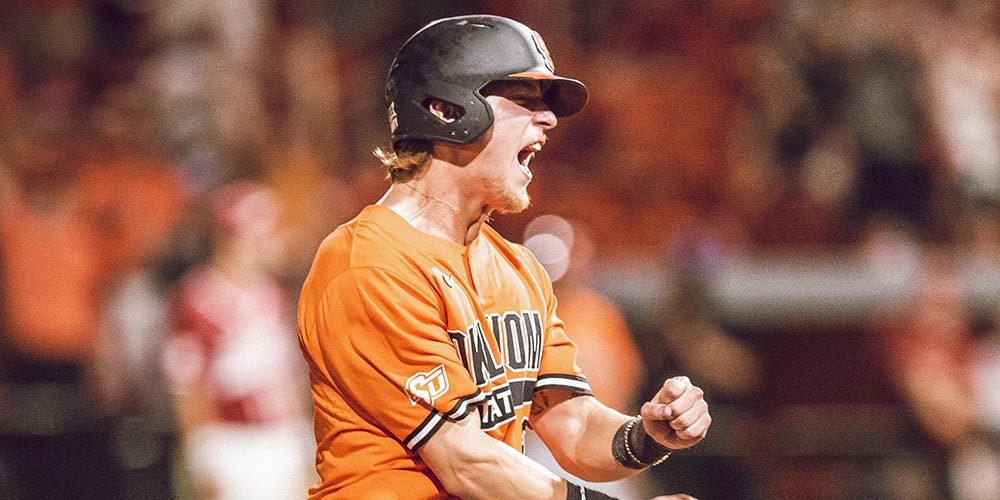 STILLWATER, Okla. – If Saturday night’s thrilling game between Oklahoma State and Arkansas wasn’t enough, a 20-12 win by the Razorbacks that forced the hometown Cowboys to play with their backs up against the wall Sunday delivered a pair of high-scoring OSU victories with no shortage of big moments. After overcoming a 12-0 deficit in its first game against Missouri State to win 29-15, Oklahoma State battled to the end in their second game to pull out an extra-innings win against Arkansas, 14-10.

Both wins allowed OSU to avoid elimination and stay alive with a chance to win the regional in its home ballpark.

It’s hard to know where to even start given the intensity that was shown on the field all day long. From the very beginning the Oklahoma State hitters showed absolutely no intimidation facing a live-armed righthander, Arkansas starter Jaxon Wiggins, who sat at 96-98 with his fastball and touched 99 miles per hour. After Wiggins struck out a pair of Pokes in the first inning, OSU bounced back and scored three runs in the top of the second, starting with a David Mendham solo home run, that chased Wiggins from the game before he could record five outs.

Roc Riggio continued to be electric at the plate, hitting an RBI single as part of that second inning and then blasting a two-run shot, his second of the day, in the top of the fourth that gave OSU a 5-2 lead. As Arkansas also battled back, the Cowboys added another run in the fifth on a Griffin Doersching home run – also his second of the day – and another single tally in the eighth on a Chase Adkison sacrifice fly.

Oklahoma State held a 7-5 lead heading into the bottom of the eighth only to see Arkansas once against respond loudly, scoring three runs and taking the lead on a two-run home run off the bat of catcher Michael Turner.

Once again, the Cowboys went back to work, undeterred, scoring three runs in the top of the ninth, taking the lead once more on a base hit by Mendham that got away from the left fielder, scoring a pair of runs. Marcus Brown drove home another run with a base hit and Oklahoma State headed to the bottom of the ninth with a precarious 10-8 lead.

True to the back-and-forth nature of the two games played between these two teams, Arkansas of course tied it up on a two-run single by Brady Slavens.

Riggio opened extra innings with a rocket of a ground-rule double. He and Zach Ehrhard – who followed Riggio’s double with a single – scored on a two-run single by Aidan Meola and Oklahoma State added two more on a towering blast down the left field line off the bat of Nolan McLean, his second home run of the day.

McLean, who was on the mound when Arkansas mounted their furious comeback on Saturday, came in to pitch in the ninth and initially blew OSU’s two-run lead in regulation. When he got another chance at closing out the game he didn’t disappoint, securing Oklahoma State’s second win of the day and extending their season by at least one more day.

“Just try to keep it fun,” a calm McLean said of his team’s character during an intense day. “Days like today are kind of what you dream about growing up and things you want to be a part of when you’re a little kid. When it finally happens you just try to have fun with each other and create memories. At this point in the year that’s all we’re trying to do, have as much fun as we can and play our butts off.”

Oklahoma State received 6.1 hard-fought innings from fifth-year lefthander Mitchell Stone. It didn’t always look pretty, and his pitching line (5 earned runs on 11 hits and 3 walks with 7 strikeouts) wasn’t one for the ages, but he threw strikes and put his team in a position to win the game.

It was Stone’s 15th appearance of the year and his eighth start. The 6.1 innings matched his season high recorded just two weeks ago, closing out the regular season with an extended relief appearance in a win against Baylor.

“Know what else it shows? Somebody in their fifth year that stuck it out, fought through injury and fought through tough times to be present for his time in a time they needed him the most,” Holliday said of Stone. “That was pretty darn awesome. Not many guys get to the end of the road like he did and I appreciate him for being loyal to this program and delivering when we needed him the most.”

For a team that has no shortage of significant contributors, Riggio is absolutely red-hot in this Stillwater Regional, scorching the ball nearly every time he steps into the batter’s box. Through four games he’s batting 13-for 23 (.565). Eight (4 doubles, 4 homers) of his base hits have gone for extra bases, he’s scored nine runs and has driven in 16, including 10 between two games on Sunday. He has raised his average 36 points (.257 to .293) in four games, no easy task at this point of the season.

Oklahoma State and Arkansas will play one more game at 6:00 p.m. on Monday to determine the winner of the Stillwater Regional and which team will advance to super regional play.

“This is something they’ll never forget,” Holliday added. “They’ll know they always have a fighting chance at anything they do no matter how low the odds may seem at the time.”

To advance to Sunday night’s game, Oklahoma State had to get past a dangerous Missouri State team they had beaten on Friday night, 10-5. In the rematch the Pokes spotted the Bears 12 runs, as MSU took an early 12-0 lead after a nine-run second and a three-run third before the Oklahoma State bats decided to wake up. And boy, did they wake up, exploding for six runs in the fourth, four runs in the fifth, seven in the six, five in the eight and seven in the ninth to win by a pair of touchdowns, 29-15.

There was no shortage of offensive heroes in this game, for either team, but it was Doersching’s sixth-inning grand slam that put Oklahoma State ahead for good. Doersching finished the game with three run-scoring hits, including a pair of RBI singles in a six-RBI performance at the plate.

One game removed from leaving 14 runners on base during their 20-12 loss to Arkansas on Saturday night, Oklahoma State’s six-run fourth inning was especially impressive while cutting Missouri State’s lead in half. In that inning the Cowboys manufactured those six runs by drawing two walks, getting hit by a pitch, hitting four singles, a double and a sacrifice fly, leaving just one runner on base when the dust settled.

Oklahoma State’s power started to re-appear the very next inning, as Riggio drilled a two-run bomb that sailed over the batter’s eye in straightaway center field. That was part of a four-run frame that pulled OSU to within three runs.

It was the sixth inning that the Cowboys just took over, a seven-run frame headlined by Doersching’s mammoth grand slam. That inning started with another tape measure shot off the bat of McLean and included an RBI double by Riggio. Justin Thompson, who had four hits in the game, drew a bases-loaded walk before Doersching stepped in the righthanded batter’s box.

OSU added five runs in the eighth and seven more in the ninth, sending 24 batters to the plate over the final two innings while putting the game out of reach.

“You saw everything he had in him to play the way he played,” Holliday said of Riggio’s performance this weekend. “But, if we really want to talk about people just emptying the tank [there’s] Trevor Martin, Mitchell Stone, Nolan McLean, the two kids that caught the game, the gritty little ballplayers in the one- and two-holes. The freshman that came up with the big hit. There’s so many kids that played with a fearlessness that allowed those things to happen. Roc was really good but there were a lot of other guys right there alongside him, including the big viking with his big homer in the first game that took us from being down when he hit the grand slam and turned the page on that. That was a moment, because you had to get through that first game for the second game to happen.

Not to be overlooked in a game with a score more befitting of a football game was Trevor Martin’s relief outing on the mound. Martin entered the game with one out in the third inning and gave the OSU hitters plenty of time to get back into this game. Martin did give up three solo home runs, but that’s pretty much all he allowed, striking out 16 batters over 6 2/3 innings, including the final batter of the game. He threw four distinct pitches but his 93-96 mph fastball was clearly his go-to pitch, sustaining that velo from beginning to end.

With Sunday’s loss Missouri State’s season came to a close, finishing the year 31-29 after claiming a spot in the NCAA Tournament by winning the Missouri Valley Conference’s automatic bid. They arrived in Stillwater with 99 home runs and added 11 more during regional play, which included their dramatic come-from-behind victory against Grand Canyon on Saturday.

“I just told them I appreciated how well they played the last two weeks,” Missouri State Head Coach Keith Guttin said, explaining what he told his team after the game. “A season with some ups and downs and they came together and played extremely well in the conference tournament. [We] competed well here, we just ran out of gas.”

Missouri State catcher Drake Baldwin was particularly locked in during the tournament, going 6-for-14 (.429) with three home runs, a double, six runs scored and 10 driven in.