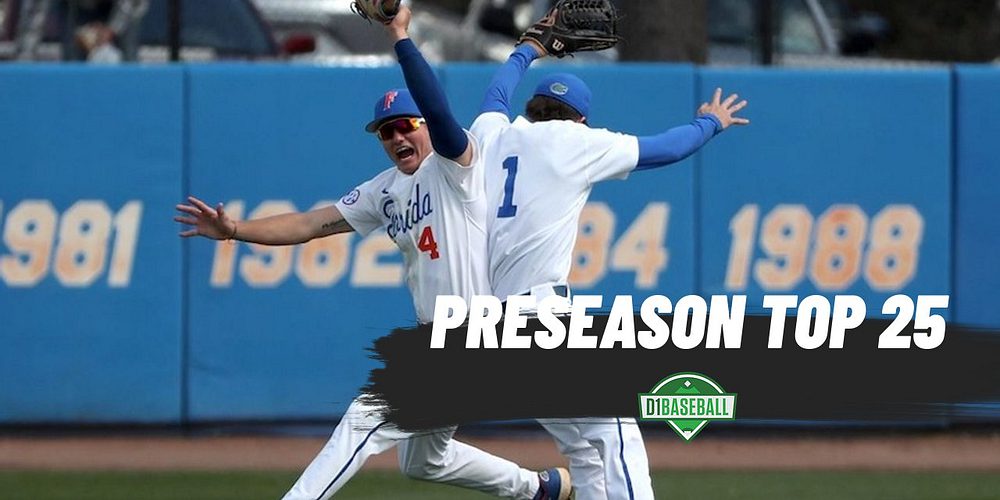 Florida opens the 2021 season exactly where it left off in 2020: ranked No. 1 in the D1Baseball Top 25. The Gators, who went 16-1 before the pandemic wiped out the season last spring, return an absurd collection of talent on the mound and around the diamond, making them the team to beat in college baseball. This marks the third time in the six-year history of the D1Baseball Top 25 that Florida has garnered the preseason No. 1 spot; it previously opened the season atop the rankings in 2016 and 2018. The Gators went to Omaha in both of those seasons.

Three other teams that finished last year ranked inside the top five are back in the top five in the preseason rankings, albeit in a different order. UCLA opens the year ranked No. 2 after ending last season at No. 5. Texas Tech is No. 3, one spot better than it finished 2020. And last year’s preseason No. 1, Louisville, begins the season ranked No. 5, one spot behind Vanderbilt (last year’s preseason No. 2).

Just three teams from the West Coast — where a number of prominent programs did not even have fall workouts due to the pandemic — crack the Top 25: No. 2 UCLA, No. 11 UC Santa Barbara and No. 22 Arizona.

Fifteen of the 25 teams in the preseason ranking ended the shortened 2020 campaign ranked in the Top 25.