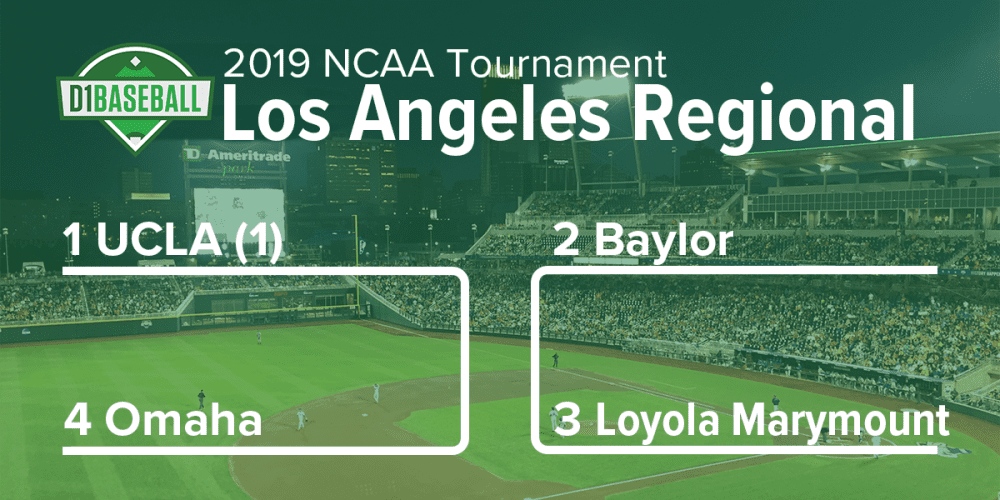 No. 1 national seed UCLA has been ranked No. 1 in the D1Baseball Top 25 for 11 straight weeks, won all 15 of its weekend series and went undefeated in midweek action. Taking down the Bruins will be a tall task, but Baylor, Loyola Marymount and Omaha will try to pull off the upset.

The Big 12 Co-Player of the Year can do a little bit of everything in the middle of the Baylor lineup. Wendzel hits for power (17 2B, 8 HR), average (.377) and gets on base nearly half the time (.488 OBP). He leads the team with 11 stolen bases and has heavenly flow coming out the back of his helmet.

The potential first round pick is a terrific backstop that helps his pitchers out in multiple ways. He hasn’t had an error all season. He’s a wall behind the dish, allowed only two passed balls and throws out 57 percent of would-be basestealers.

The Pac-12 Pitcher of the Year missed the first 12 games of the season, but didn’t waste any time getting back in the groove. He beat Oregon State in his first start, striking out eight in 4.2 innings. He followed with a brilliant start against the raucous Arizona lineup, giving up one hit in 7.1 innings. Garcia has not allowed more than two earned runs in an outing all year and has four double-digit strikeout performances, including recording the first 12 outs via punch outs against Washington. He’s only thrown 76 innings because of his late start, which might also make him the freshest ace in the tournament.

If Omaha wants to make some noise in its first Division I regional appearance, its pitching staff is going to have to step up. It enters with a 4.66 team ERA. Payton Kinney (11-1, 1.65) has outstanding numbers, but no one else has an ERA below 3.88, including No. 3 starter Spencer Koelewyn, who has the ability to be dynamic on the mound. The southpaw (4-2, 4.79 in 14 starts) was extremely difficult for opponents to hit. They only got 29 hits against Koelewyn in 56.1 innings for a nation best 4.63 hits allowed per nine innings while striking out 12.62 per nine. He held opponents to a .155 batting average. A better strategy for hitters was to let the 87-89 fastball, good curveball and changeup go by because Koelewyn struggled to throw them for strikes, walking 60 people. But if he gets hot, he could really frustrate a lineup.

The Bruins have had five expected starting pitchers go down with injuries this season, including Garcia missing the start of the season, but it hasn’t mattered as UCLA’s starting pitching has been lights out. Garcia (9-0, 1.42) returned with a vengeance and Jack Ralston has emerged out of nowhere to be a revelation, winning 11 games with a 2.43 ERA. Yea, that’s 20-0 for its top two starters.

The Bruins’ trio of Nathan Hadley, Kyle Mora and Holden Powell have been the best backend stopper group in the country. All three have at least 34 appearances with ERAs of 2.41 and below and WHIPs of 1.03 or less. Hadley is 8-1 and has given up just 18 hits in 37.1 innings. He has a nasty changeup that UCLA slugger Michael Toglia called the best pitch he’s ever seen. Mora leads the nation with 43 appearances and Powell has power stuff to finish off games with a 94-95 mph fastball. He has 16 saves.

The Bears have a pair of first-round talents in the middle of their lineup in Wendzel and Langeliers. They have several players that can drive the ball for extra bases. UCLA’s offense is dynamic too, but Baylor has struck out 89 times fewer than the Bruins while scoring 0.3 runs more per game.

UCLA didn’t lose a weekend series this season. It can pitch, hit and play defense and John Savage gets the most out of his club. Unlike the 2015 Bruins team that was also a top seed, you have to hit and pitch your way to victory over this year’s club. In 2015, Maryland won a pair of games in the Los Angeles Regional while holding the Bruins to one run. This year they had half the number of games scoring two runs or fewer than in the 2015 regular season.