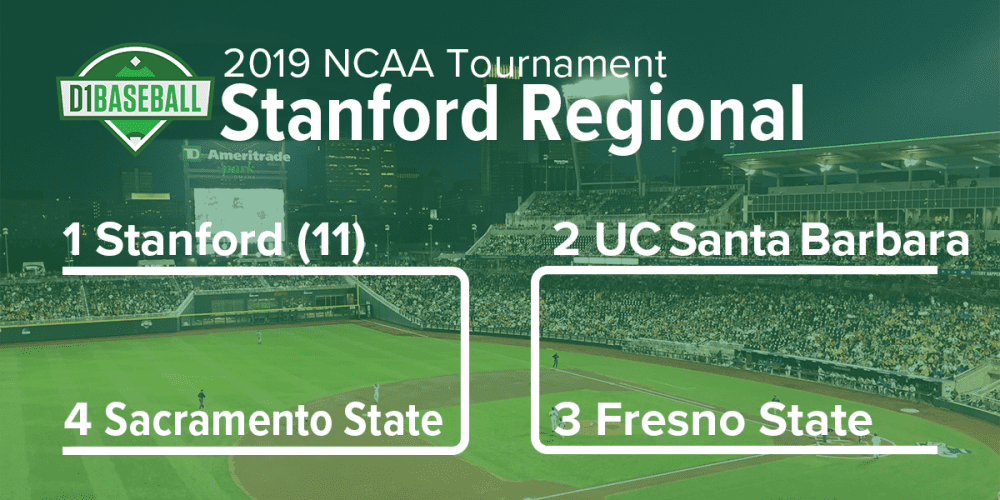 In perhaps the most loaded regional in the field of 64, Stanford welcomes Big West champion UC Santa Barbara, Mountain West champ Fresno State, and WAC champ Sacramento State. When four very good West Coast teams get together, anything can happen.

With his big leg kick, fireballing fastball and primal screams following the final out in tight games, Lincoln is just fun to watch. He probably makes things too fun for the UC Santa Barbara coaching staff since he is apt to put runners on before baring down to get the final outs.

A fifth-year senior that was all but forgotten by outsiders, Tatum has had a monster redemption season to lead the Bulldogs back to the postseason. He led the Mountain West in slugging percentage (.601) and RBIs (65) while batting .353 and being second in the conference with 12 home runs.

The Pac-12’s Co-Defensive Player of the Year knows the importance of blocking every ball and not letting anything squirt away at Sunken Diamond where there is plenty upon plenty of foul territory. That will be imperative as well as potentially slowing the running game of UC Santa Barbara.

Last week, Jensen was still pumping 97-mph fastballs in the seventh inning in an outing where he allowed three hits and struck out 10. The righthander has reportedly been up to 101 mph this season and sports an 11-1 record.

Matthiessen has been a monster at the plate while also pitching. He’s been vital to the pitching staff, moving into the starting rotation and giving the Cardinal another reliable arm.

UCSB runs out the rare all-southpaw starting rotation, even having a lefty midweek slinger. The Gauchos have eight lefty pitchers on the roster, but interestingly, the top four all come in different sizes. Friday starter Ben Brecht is a long, lanky 6’7″, 215 pounds. Jack Dashwood is a husky 6’6″, 240 pounds. Freshman Rodney Boone is listed at a slight 6’2″, 175 pounds and midweek lefty Jorge Arellano Jr. is 6’2″, 220 pounds. More impressive than their stature is their combined 31-4 record with ERAs of 3.76, 2.17, 2.78 and 2.30.

The Bulldogs have three top arms that they want to get the ball to with a lead. The trio of Kevin Larson, Oscar Carvajal and Jaime Arias are a combined 7-3 with 14 saves and each have an ERA below 3.00. They can each go an inning giving a much different look each frame. Larson is 6’9″ and throws with an extreme downhill angle. Then you get Carvajal in a normal righthanders frame and Arias from the left side.

The Gauchos’ offense exploded this season under new assistants Donegal Fergus and Matt Fonteno. It led nearly every Big West category while seeing a number of players finally live up to their previous hype. The Gauchos hit .299 as a team with three players having double-digit home runs and four having 45 or more RBIs.

The Gauchos rank just behind Stanford in fielding percentage, but they have looked like a different defensive team since moving Andrew Martinez to second base and getting Marcos Castanon back playing third base.

This is without question the most difficult regional in my opinion, so I’m giving each seed a declining win probability. As the top seed, Stanford has a 40-percent chance of pulling off what it hasn’t been able to do the last two years at home. UC Santa Barbara gets the 30, Fresno the 20 and Sacramento State has a 10-percent chance.