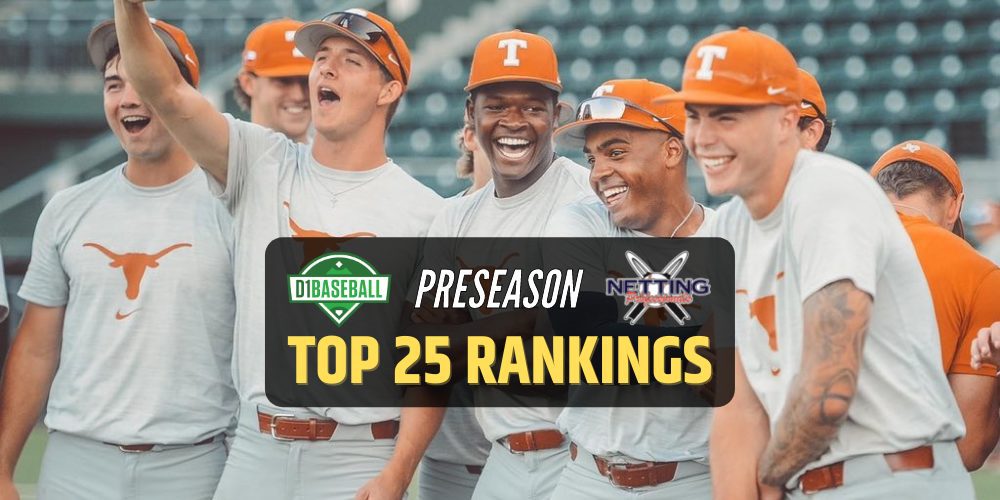 Texas is No. 1 in the D1Baseball Preseason Top 25 rankings for the first time ever. In fact, this marks the first time the Longhorns have ever been ranked No. 1 in the D1Baseball Top 25, which began in 2015. Texas welcomes back numerous key pieces, including the cornerstones of an elite pitching staff, from a team that won 50 games and reached the national semifinals in Omaha last spring.

SEC powers Arkansas, Vanderbilt, Mississippi State and Ole Miss occupy the next four spots to round out the top five. The SEC leads all conferences with eight teams in the Top 25, including six in the top 10, counting No. 8 LSU and No. 9 Florida. Georgia (No. 16) and Tennessee (No. 18) also landed in the rankings out of the SEC.

No. 6 Stanford is the highest-ranked team from the Pac-12. Arizona (No. 15) and Oregon State (No. 18) also cracked the rankings from the Pac.

The Big West lands two teams in the rankings: No. 20 UC Irvine and No. 24 Long Beach State. No. 12 East Carolina and No. 22 Dallas Baptist give the American Athletic and Missouri Valley conferences one team apiece in the Top 25.