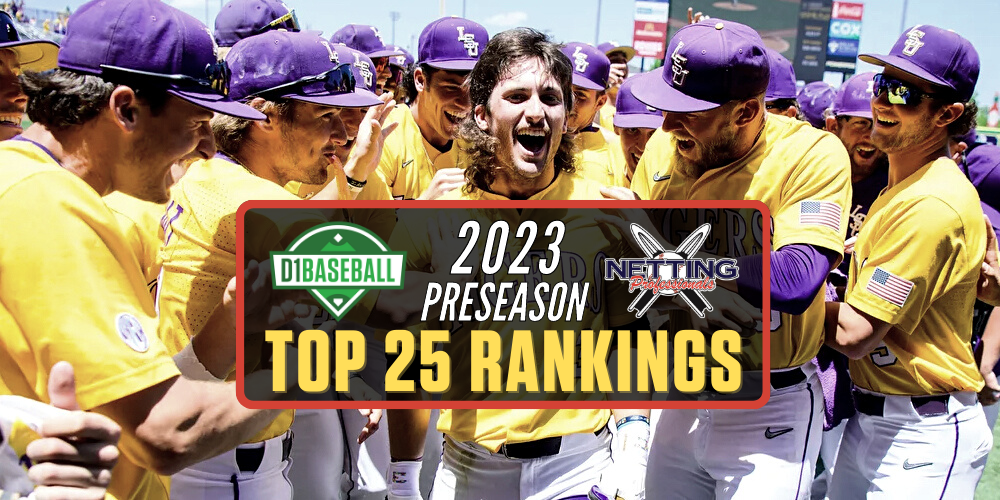 LSU is No. 1 in the D1Baseball preseason Top 25 for the first time in the nine-year history of the rankings. The Tigers have been ranked in all nine D1Baseball preseason Top 25 rankings, and this marks their sixth appearance in the preseason top 10, with their previous high ranking coming in 2019 (No. 2). After finishing as the runner-up in the Hattiesburg Regional a year ago, LSU supercharged its roster by reeling in the nation’s No. 1 ranked group of transfers as well as the nation’s No. 1 ranked freshman class, bolstering a returning core that was already well stocked with talent.

Fellow SEC clubs Tennessee (No. 2), Ole Miss (No. 4) and Texas A&M (No. 5) join LSU in the top five. The Volunteers won 57 games a year ago but fell one victory shy of Omaha, while the Rebels won their first College World Series and the Aggies reached college baseball’s final four. No. 7 Florida, No. 8 Arkansas and No. 10 Vanderbilt give the SEC seven teams ranked in the top 10. No. 20 Alabama and No. 23 South Carolina bring the total number of SEC teams in the rankings to nine, leading all conferences.

Ninth-ranked Oklahoma State is the top Big 12 team in the rankings, followed by No. 15 TCU and No. 24 Texas Tech.

Other Top 25 teams include No. 11 East Carolina (American Athletic Conference), No. 13 Maryland (Big Ten) and No. 18 Southern Miss (Sun Belt), all of whom hosted regionals last year, with the Pirates and Golden Eagles each advancing to supers.