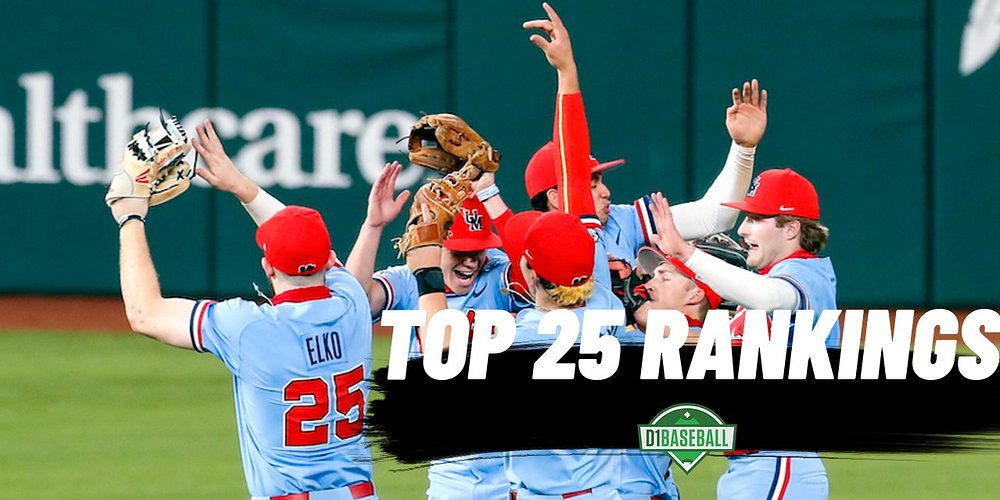 After a tumultuous opening weekend in college baseball, Ole Miss took took over the No. 1 spot in the D1Baseball Top 25 rankings for the first time in the seven-year history of the rankings. The preseason No. 6 Rebels went 3-0 at the State Farm College Baseball Showdown with wins over three Big 12 opponents who ranked in the preseason Top 25: then-No. 3 Texas Tech, then-No. 9 Texas and then-No. 10 TCU.

Arkansas also made a big jump on the strength of its own 3-0 showing in Arlington, with three wins against the same three opponents Ole Miss defeated. The Razorbacks vaulted six spots from No. 8 to No. 2, matching their highest ranking ever in the D1Baseball Top 25, last achieved in the final ranking of the 2018 season.

Vanderbilt and Louisville moved up one spot apiece to Nos. 3 and 4, respectively, and Mississippi State moved up two spots to No. 5 following a 2-1 showing in Arlington.

Other teams that took tumbles in the rankings included TCU (down four spots to No. 14), Texas (down 10 spots to No. 19), and West Virginia (down nine spots to No. 23). The Mountaineers went 2-2 against Georgia State, but their fall in the rankings also reflects a recalibration in light of the news that key weekend starter Ryan Bergert will miss the season due to injury — a development that was released after our preseason Top 25 was published.

One new team joined the rankings this week. Duke, the unofficial team No. 26 in our preseason rankings, went on the road and took two of three from Coastal Carolina to climb into the rankings at No. 25. The Blue Devils replace Arizona, which fell from No. 22 out of the rankings after a 2-2 week at home against Ball State.

D1Baseball editors and national writers determine the Top 25 rankings. Records below are through games of Feb. 22.