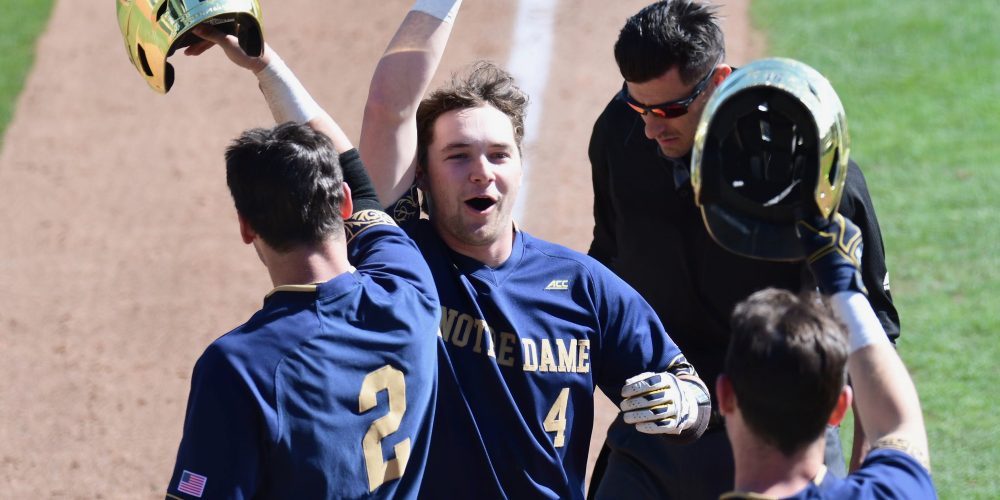 CHAPEL HILL, N.C. — There was a moment in Notre Dame’s 14-8 win Sunday at North Carolina that captured some of the impact Link Jarrett has made on the Fighting Irish in his first season as head coach. With Notre Dame leading 10-8 in the seventh inning, the Irish loaded the bases with two outs, and UNC summoned Max Alba out of the bullpen. As Alba went into his full over-the-head windup on the first pitch, Notre Dame freshman Jack Brannigan broke from third base and raced to the plate, arriving even before the pitch for a straight steal of home at the front end of a triple steal, igniting the Irish dugout.

“Man, that’s just great coaching,” a scout observed behind me in the Boshamer Stadium stands.

“We always time the delivery, and their pitcher started his warm-ups in the windup and then went to the stretch. So as that was happening, we had already put it in place, if he was in the windup — and he was,” Jarrett explained after the game. “And Brannigan did a good job, because you can’t give it away. He was very poised with what he was doing at third. [Batter Niko] Kavadas knew to take the pitch, and you have to try to take advantage, against good teams. You can’t execute that on the fly, we worked on that. It may only happen once a year, and it happened today, and you need to be able to function when it’s there for you opportunity-wise.”

That kind of preparation goes a long way, but Jarrett’s impact goes far beyond that. For one thing, he has earned a reputation over the last two decades as a top-notch teacher of hitting, a reputation crafted during his days as an assistant at Mercer, East Carolina and Auburn, then as head coach at UNC Greensboro. And through one month of the 2020 season, Notre Dame’s offensive turnaround has been dramatic. After ranking 241st in the nation in batting (.249) and 246th in scoring (4.9 runs per game) a year ago, Notre Dame is 33rd in batting (.296) and ninth in scoring (8.9 runs per game) so far this spring. That’s a major reason behind its surprising 10-2 start, which was punctuated by a road sweep of the Tar Heels this weekend. …