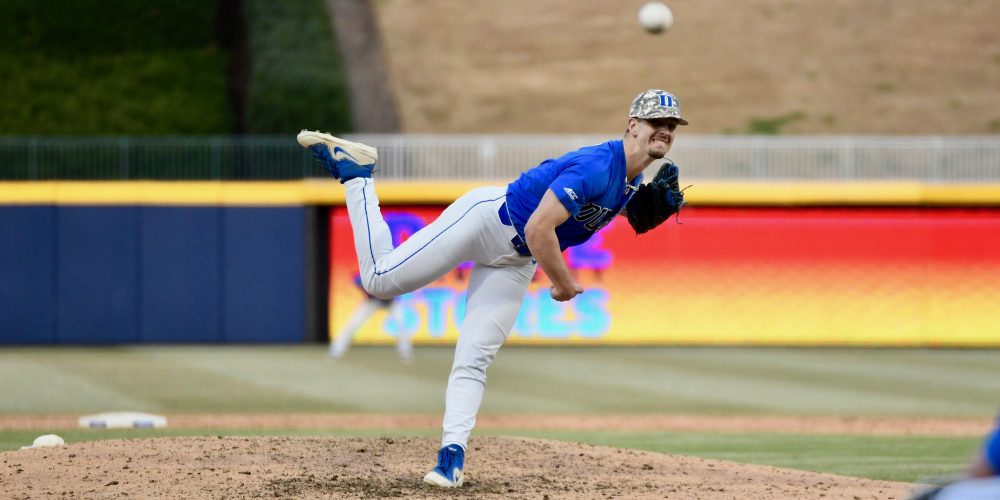 DURHAM, N.C. — Duke coach Chris Pollard called it “a real gut-check moment on Sunday morning.” Pollard’s Blue Devils were suddenly reeling a little bit, having lost back-to-back midweek games at home against Penn last week, then losing the first game of their ACC-opening series at Virginia 11-3 on Saturday. It was time for Pollard and his staff to find out what their team was made of.

“We talked about embracing it a little bit. We had two tough losses midweek, both ballgames that — not to discredit anything Penn did — but we didn’t execute things that we were supposed to execute,” Pollard said. “Then we came out and the score was not indicative of the closeness of the game against UVa. We had a couple of 0-2 pitches to get off the field, when it might have been a 3-3 ballgame in the eighth, and we just didn’t execute. But we dropped three ballgames in a row, then you’re sitting there on the road, with a doubleheader coming up there on Sunday in a very good, hostile ACC environment. So we had a really good gut-check meeting on Sunday morning, and just talked about doing a better job of being comfortable being uncomfortable. And our guys really got into the moment on Sunday, competed great all day, and then I thought we came out and played our most complete game [Tuesday].”

The Blue Devils swept that doubleheader on Sunday in Charlottesville, and just as importantly they built upon that newfound momentum with a convincing 7-2 win against East Carolina on Tuesday at the Durham Bulls Athletic Park. Just like that, a potential tailspin had turned into a springboard.

The road doesn’t get any easier for Duke, which now welcomes No. 7 Louisville to Durham for a three-game series this weekend. The Cardinals are also riding a wave of momentum into the weekend, after bouncing back from a Sunday loss to Boston College with a marquee midweek sweep of a two-game series against No. 9 Ole Miss. Louisville won the first game against the Rebels on Zach Britton’s walk-off single in the 10th, then rode its offense to a 10-8 win on Wednesday.

“We got the offense going,” McDonnell said. “We got a good start Tuesday from Luke Smith, who has given us two really good starts in those midweek games. Fortunately both days we kind of held off a rally — they’ve got a really good offense. You play 18 innings in the midweek, you’re throwing a lot of young guys, new faces, so I thought we were challenged.”