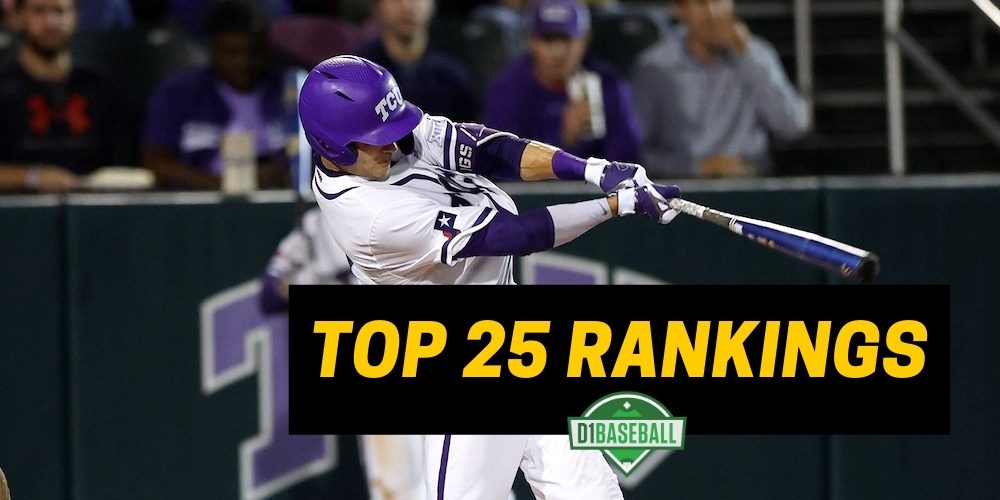 Chat Transcript | How They Fared | Teams That Aced Week 11

Arkansas maintained its grip on the No. 1 spot in the D1Baseball Top 25 rankings for the fourth week in a row after winning a road series at LSU, keeping the Hogs unbeaten in weekend series this season. Vanderbilt held steady at No. 2 despite losing two of three on the road at rival Florida. The preseason No. 1 Gators returned to the top 10, climbing four spots from No. 14.

TCU moved up two spots to No. 3 after a 4-0 week, putting the Horned Frogs all alone atop the Big 12 standings. Texas, which had been tied for first place entering the week, lost two of three at home against Texas Tech, dropping the Longhorns three spots to No. 6 in the rankings. The Red Raiders climbed three places to No. 8.

Mississippi State leapt over Tennessee to take the No. 4 spot, as the Bulldogs swept Texas A&M while the Vols posted a 2-2 week. UT slipped just one spot to No. 5. Seventh-ranked Notre Dame (up one place after sweeping North Carolina) and ninth-ranked Arizona (up three slots after sweeping Utah to grab sole possession of first place in the Pac-12) round out the top 10.

The biggest riser this week is Ole Miss, which vaulted seven spots to No. 12 after sweeping then-No. 13 South Carolina. The Gamecocks slid six rungs to No. 19. Other big fallers include Louisville (down eight to No. 15 after getting swept at Clemson) and Charlotte (down eight to No. 23 after dropping three of four at Old Dominion, which climbs to No. 22 by securing a split of the eight-game season series against the 49ers).

Two teams enter the rankings this week. Indiana checks in at No. 24 after winning a big series against Iowa to move into sole possession of first place in the Big Ten. And preseason No. 2 UCLA returns to the rankings at No. 25 after taking two of three from Oregon State. Nebraska and UC Irvine fall out of the Top 25.

D1Baseball editors and national writers determine the Top 25 rankings. Records are through games of May 2.