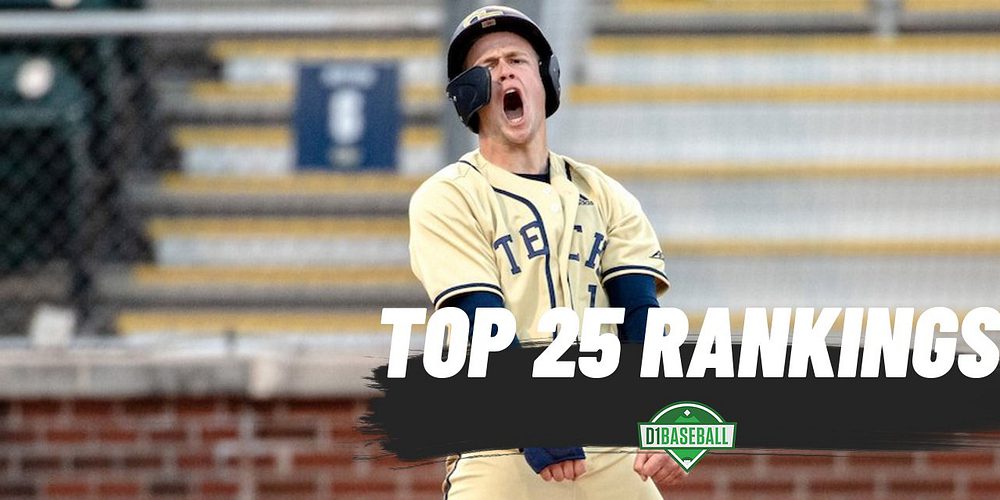 The top four teams remained the same in the D1Baseball Top 25 rankings, led by undefeated Arkansas, which held onto the No. 1 spot. Vanderbilt, Mississippi State and Ole Miss held steady in the next three spots, and Florida climbed one place to round out an all-SEC top five.

Georgia Tech made one of the week’s biggest moves, jumping five places to No. 7 after winning a series against Louisville, which fell from No. 5 to No. 10. No. 6 UCLA, No. 8 Miami and No. 9 Texas Tech round out the top 10.

Climbers make up the next eight spots. The biggest movers in this group are Oregon State (up four to No. 16), Boston College (up five to No. 17 after winning a road series at Auburn), and Virginia Tech (up four to No. 18 after taking two of three from then-No. 25 North Carolina).

UC Santa Barbara and LSU plummeted in the rankings after bad weekends. The Gauchos fell from No. 7 all the way to No. 22 after getting swept at home in a four-game series by Oregon. LSU fell 10 spots to No. 21 after dropping a home series to Oral Roberts. Virginia fell from No. 16 out of the Top 25 following its second straight ACC series loss. And UNC dropped out from No. 25 after its series loss to the Hokies.

D1Baseball editors and national writers determine the Top 25 rankings. Records are through games of March 7.