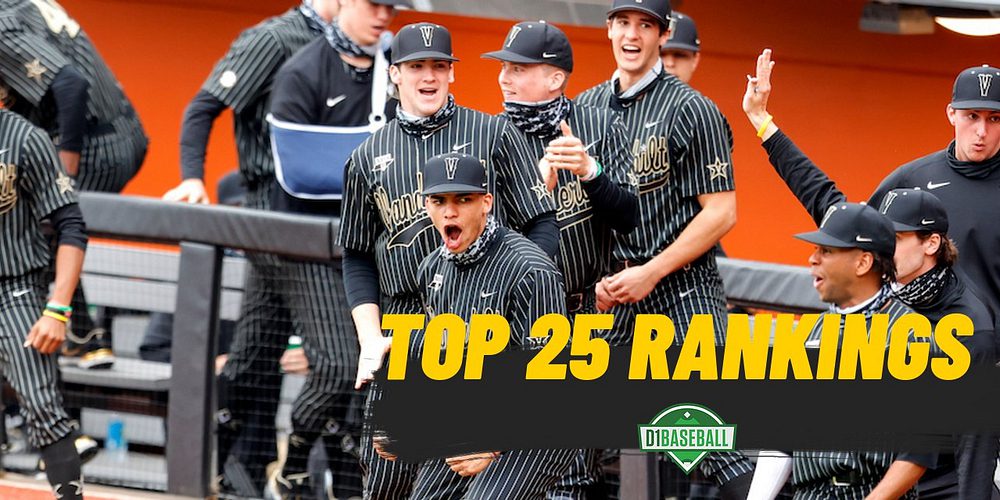 D1Baseball Top 25: Vanderbilt Takes Over No. 1

Vanderbilt moved up one spot to No. 1 in the D1Baseball Top 25 rankings after riding dominant starts from Kumar Rocker and Jack Leiter to a series win against then-No. 16 South Carolina. The Commodores improved to 15-3 overall and have won all five of their weekend series, highlighted by back-to-back Top 25 series wins over the last two weeks at Oklahoma State and vs. the Gamecocks.

Arkansas drops one spot to No. 2 after a 2-2 week, even though it rebounded from Friday’s blowout loss to win a home series against Alabama. Mississippi State, Ole Miss and Florida held steady, keeping the all-SEC top five intact.

The next seven spots are occupied by teams that moved up one notch apiece, starting with Texas Tech, which won its Big 12-opening series against Oklahoma State. ACC upstarts Notre Dame and Pittsburgh continued to impress with series wins against Duke and at Virginia, respectively, pushing them up three spots apiece to Nos. 14 and 15. Oregon moved up four places to No. 16 after taking two of three from Arizona State to open Pac-12 play.

D1Baseball editors and national writers determine the Top 25 rankings. Records are through games of March 21.