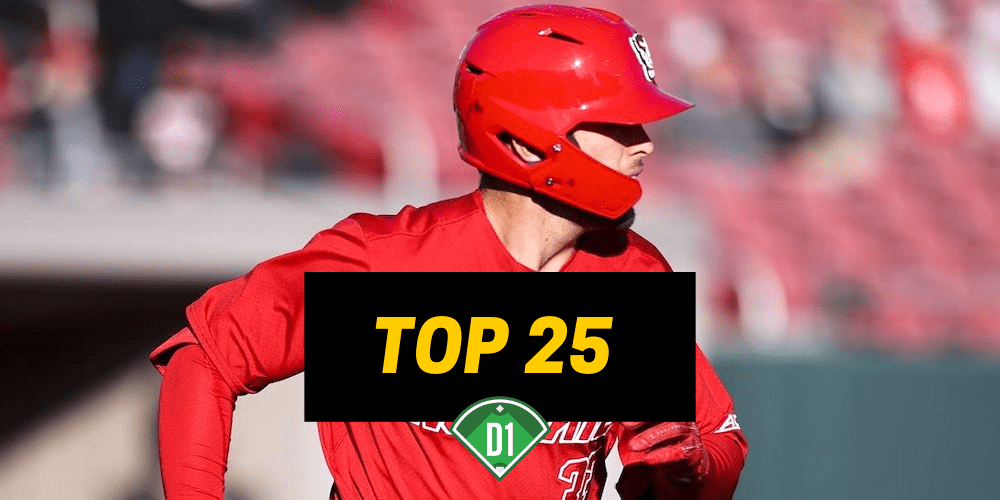 Arkansas cemented its hold on the No. 1 spot in the D1Baseball Top 25 by winning a road series at No. 4 Tennessee, keeping the Hogs in the top position for the sixth week in a row. The Razorbacks improved to 7-1 against teams currently ranked in the top 10, and 15-3 against teams ranked in the Top 25 — with all 18 of those games played away from Baum Stadium.

The next four teams in last week’s rankings all lost their series, allowing Texas to move up three spots to No. 2 despite being off for exams. Vanderbilt fell one spot to No. 3 after losing a series at Ole Miss, and Tennessee held steady at No. 4 after dropping two of three to the top-ranked Hogs. Texas Tech returned to the top 5 after a series win at Oklahoma.

The two Pac-12 front-runners made jumps this week after sweeping series against teams toward the bottom of the conference standings. Oregon moved up four spots to No. 6, and Arizona vaulted six places to No. 7, leapfrogging No. 8 Notre Dame and No. 9 Florida, both of whom held steady.

Mississippi State and TCU were the two big fallers in the top half of the rankings. The Bulldogs tumbled seven spots to No. 10 after a bad series loss at home to last-place Missouri. The Horned Frogs fell six spots to No. 12 after dropping two of three at home to Louisiana-Monroe. Other big fallers this week include Louisville and Pittsburgh, both of whom tumbled from the mid-teens out of the Top 25 after getting swept by North Carolina and NC State, respectively. And Indiana fell out of the rankings from No. 21 after losing a road series at Michigan, which returned to the rankings at No. 24.

Other climbers this week include No. 13 Ole Miss, No. 17 Gonzaga and No. 18 UCLA, each of whom jumped five spots. UC Irvine and South Carolina moved up four spots apiece to Nos. 20 and 21, respectively.

In addition to the Wolverines, NC State returned to the rankings at No. 23 after sweeping Pitt on the road, and Arizona State made its season debut at No. 25 after taking two of three from Oregon State to improve to 14-10 in the Pac-12.

D1Baseball editors and national writers determine the Top 25 rankings. Records are through games of May 16.